I am not a specialist in China, far from it, but I know that Chinese culture of the statecraft does involve restrain, ambiguities and even ambivalence when articulating own position in the international arena.  Well, looks like Chinese finally are ready to drop those tools of Chinese foreign affairs craft and, finally, went for a jugular. Apart from unfolding trade war between China and USA, which may have played a significant role in Chinese articulating in much sharper language their position, the visit of China's Defense Minister Wei Fenghe to Moscow and his statement is something else altogether. As Fox reports:


China's new defense minister says he is visiting Russia to send the United States a message about the increasingly close ties between Moscow and Beijing. Gen. Wei Fenghe said Tuesday that he chose Russia for his first trip abroad since becoming the international face of China's military last month to "show the world a high level of development of our bilateral relations and firm determination of our armed forces to strengthen strategic cooperation."

In other words, for Chinese highest ranking military official to articulate such stern position and admit de facto emerging Moscow-Beijing military, and political, alliance is a very big deal for all parties involved. This is not to say of articulating China's readiness to start speaking, and acting, in broadsides. So, the brave new world emerges. As I stated a year ago, China is very interested in Russia's top tier military and civil technologies which she desperately needs for both defensive and power projection purposes. Since then things unfolded with a lightning speed. When even vehemently Russophobic Moscow Times has to admit a massive spike in Russian-Chinese trade in less than one year, one has to take a note—China is opening her markets to Russia. By 2020 this trade should reach $200 billion—a rather impressive volume by any standard. A full-fledged alliance is forming and is in advanced stages. It also shows that Russia made her choice. Within the span of 18 days, from Putin's explosive address to Russia's Federation Assembly to Russia's presidential elections on 18th of March the switch was flipped and red lines drawn.

Now we all come to this nagging question of the US having, or otherwise, enough geopolitical currency to "buy" Russia. As of today, April 4, 2018 the United States cannot afford to "buy" Russia, the game is over in this respect and the combined West as a geopolitical construct interests overwhelming majority of Russians in only three aspects:

1. Sell Russian energy and products there;


2. Maybe visit as tourists once in a long while.

That's all. In fact, huge swaths of Russian public have no problem with not having any relations with the West at all, and, in fact, many wouldn't mind new Iron Curtain to prevent Western "ideas" and what passes today as (largely filthy) Western "culture" from reaching Russia which finally recognized herself as a self-supporting, self-sustained civilization, not just the nation. Sure, the summit with Donald Trump is good and is needed to prevent the conflict, maybe. But, while Russia was never West's to lose to start with—too big and important, there is no doubt that West lost her for itself. As I stated not for once, after the Kiev's bloody coup, the West committed cultural suicide in Russia. Today, the level of condescension, revulsion and outright rejection among Russians towards combined West is unprecedented historically. I simply cannot recall anything which is even remotely comparable in Russia and I am not exactly a spring chicken. It is historically unprecedented. This rejection is not limited to one generation—it is across the board with Russian youth, people no older than 30-35, suddenly revealing something which it seems was lost forever, yet it wasn't—they became staunch patriots and this was accomplished not thanks, but despite Russian education, arts and news scene which for decades was run by people who didn't see Russia as a subject of history. It is radically different today on all levels. It is nothing short of miraculous that this was preserved and grew tremendously once combined West declared war on Russia. As I stated not for once—the West, without learning and understanding Russian/Soviet history of the 20th Century is simply not equipped to deal with Russia. It simply refused and now cannot grasp what it is dealing with. But then again, Oceania was always at war with Eurasia--nothing new for Russians here. As Repin's famous portrayal of Cossacks Writing a Letter to Turkish Sultan: 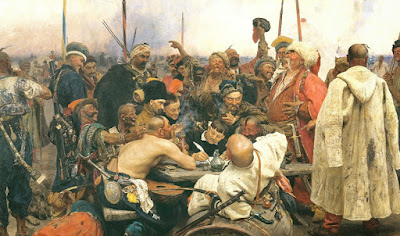 Modern iteration of this famous art captured Russians' attitudes today with remake of the classic by Vasily Nesterenko, symptomatically titled Russians' Letter to Enemies. No comments are needed here. 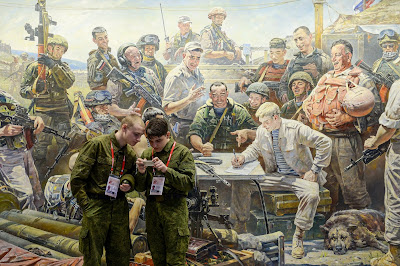