Here is British "presentation" of "proofs" of Russia poisoning Skripal and his daughter by some nerve agent "Novichok" which, should it have been used would have killed a truck load of people since is incredibly toxic. I know how the training of ZOMP (Defense from Weapons of Mass Destruction) is done in military and, specifically, how it is done re: nerve-paralytic agents in PRE-Novichok era. There is an element in this training which involves simulation of the removal of chemical resistance suite in the absence of proper sprinkler decontamination system and reagents, only using some naturally occurring water, which, BTW may also be contaminated. 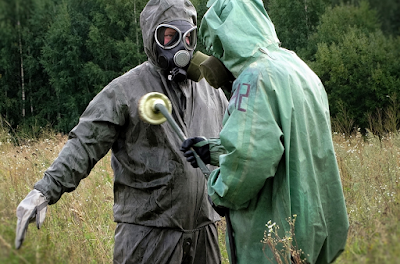 So the element is, with Flag-Chemist standing with the stop watch and observing if you will be able to remove the suit in accordance to algorithm and, get this, without accidental touching even by 1 square millimeter of your skin outside, that is not properly decontaminated, parts of your suit. If you touch it--you are "dead", the exercise continues without you, you get the "fail" mark and then separately from the rest, try to pass.

What is presented here is a low quality hysterical amateur propaganda with not a shred of evidence of how this "poisoning" have happened that, and I quote:

Can then UK chemical warfare "specialists" explain how these all 2+51+131=184 people are still alive after being subjected to:

which is touted universally as one of a deadliest nerve agent in the world? So, the British proof of Russia's evil doing is this:


Get it? That is the proof that they have "no doubts"--not a single material evidence, sabotage of presenting specimens of this "Novichok" thing for analysis, a hysterical campaign of accusation within minutes of Skripal's poisoning. Me thinks, somebody doth protest too much.

Meanwhile in her debilitating anti-Russian hysteria, UK somehow overlooked a true Russian crime in using nerve agents against British interests. The name of this super-secret chemical agent is Starichok (old man) and the main effect of it is slow and painful mental degeneration which unfolds over some years. One of the key UK assets has been subjected to this horrible chemical weapon circa 2007 and since then never stopped his mental decline.

Come to think about it, most of Western "elite" has been poisoned by this horrible substance, and yet nobody sounded an alarm in this elite's constant decline of mental faculties. Damn Russians are good at chemical warfare and concealing it, don't you think?
Posted by smoothiex12 at 12:56 PM