OK, Allen Dulles did have evil plans. But we all live in meme-driven reality today and once in a while some of those memes are too good to ignore. Knowing Russia's eternal struggle with her soccer national team, especially on the eve of the domestic World Cup 2018, I found this to be extremely funny. 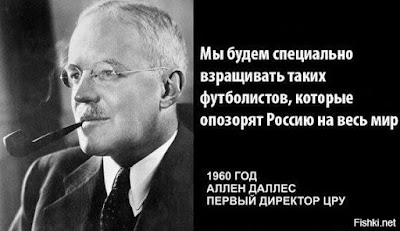 The caption says this: we will deliberately grow and groom such soccer players, who will embarrass Russia in a front of the whole world. How 'bout this level of evilness. Check and mate, America--your plans have been exposed.

Now on a more serious note: in a Soviet cinematographic masterpiece  of 17 Instances Of Spring, tastelessly and ignorantly compared by Western media to James Bond movies, Allen Dulles was portrayed by a superb Soviet actor (the whole cast of 17 is stunning) Vyacheslav Shalevich and here how he looked as Allen Dulles: 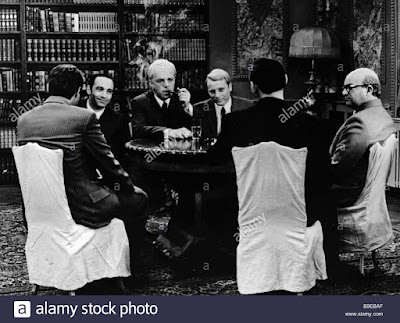 You don't need any comments to recognize who is Allen Dulles (portrayed as cold intellectual) in this screenshot from that legendary Soviet series. The likeness was rather startling, especially in motion. And I believe this photo is exactly from the moment of discussion of Dulles' evil plans for grooming Russian national soccer team for a strategic embarrassment of Russia at the World Cup 2018... Nah, it is a first meeting of Dulles and his people with Karl Wollf (Operation Sunrise) in Switzerland.
Posted by smoothiex12 at 10:58 AM