Julian Assange As A Prognosticator.

He is a very bright fellow, you know, in iPhone-7, or whatever is hip currently, way. Book smart? Probably, again in a Idiot's Guide to C++ or Java kinda way. And, of course, Julian Assange never completed his programming degree but still managed to obtain a global notoriety through his Wikileaks service and his public activity, which, in the end, brought him to the position he is in right now--that is being a prisoner in Ecuador's Embassy in London. Evidently this, somehow, qualified him in the eyes of many to pass judgements on some key geostrategic and political issues. Such as this: My analysis is that Trump would not be permitted to win. Why do I say that? Because he has had every establishment off his side. Trump does not have one establishment, maybe with the exception of the Evangelicals, if you can call them an establishment,” said Assange. “Banks, intelligence, arms companies, foreign money, etc. are all united behind Hillary Clinton. And the media as well. Media owners, and the journalists themselves.


Well, in related news--the sky is blue and the water is wet. If repeating, however justified (and I underscore this), cliche passes in Assange's world as "analysis", then how does a real deal, a genuine article, so to speak, look like? Obviously, if Assange thinks that dumping gigabytes of e-mails, which is nothing more than raw data which is as far from knowledge as it could be, makes him qualified for making a grandiose statements on internal US policies, I have to ask a question--how about this really interesting turn of events which happened a week before Assange gave his views? Last time I checked, Federal Bureau Of Investigations, which is not only Law Enforcement organization but also a serious intelligence agency, while not being "for Donald Trump", certainly, is not "behind Hillary Clinton" either. And FBI does matter in US internal politics a helluva deal more than Assange can possibly imagine. So, can we please deduct FBI (the rumor has it that some pretty high positioned agents within FBI do care about integrity) from the list which Assange's "analysis" produced. Again, the rumor has it that Clinton can even be indicted. Yes, Mr. Assange, we know that US media are corrupted to the core, they are also utterly incompetent but isn't it strange, that despite all this unprecedented volume of sewage poured on Trump he is still not only in the race but, actually, leads HRC. Does it tell us anything? Evidently great "analyst" Assange is not aware that good ole' USA does not consist of "banks, intelligence and arms companies" only. US also consists of very many people who are decent down to earth folks who do believe that their voice must count. Majority of the US, once one leaves premises of "hip" places such as Silicon Valley, NYC or SF and gets into the neck of the woods, where real people live, it becomes very clear why Trump has such an enormous support. Yes, including very many people in said banks, armed forces, intelligence agencies and arms companies. But then again, as a programmer, I doubt Mr. Assange knows distinction between information and knowledge.

Israel Shamir wrote a wonderful piece at Unz Review titled "I Envy You", which starts with this: I envy you, American citizens. I do not care about your military might, nor for your supreme currency, the US dollar. I envy your chance to deal on 11/8 a decisive blow to the rule of the Masters of Discourse. Though the Masters control the entirety of world media, and they decide what people may think and say from Canada to Hong Kong, only you, American citizens, can defeat them. This is a great chance, a unique opportunity not to be missed. I can only subscribe to every word in this excellent piece.

But back to Assange and his celebrity status. It is this status which allows many people, even not very educated (and by education I don't mean formal degrees only) such as Assange to pass judgement on things they have no clue about. In his interview to NYT couple of months ago, Assange paraded his ignorance of world affairs, geopolitics, economics and military in the most profound ways. While making correct statements on "neo McCarthyist hysteria", he produced this:“Any serious analyst understands that China and the United States are the only real games in town,” he said. “China has ten times the population of Russia, seven times the GDP. Russia has the GDP of Italy. Of course, within its own neck of the woods, countries in between Russia and China, the Caucasus and so on, of course, Russia is very significant to them. On the world stage, Russia’s a bit player.”
Here he repeats this beaten to death cliche about Russia's GDP being that of: Italy, Australia, Netherlands, Albania.... etc. One can fill in this array any way one wants. I wrote about these idiotic and ignorant comparisons a number of times. Somehow the fact that Russia's GDP (PPP) is almost twice that of Italy's escaped Mr. Assange, but then again, no surprises here. What is the most troublesome is the fact that Assange doesn't know how GDPs "convert" themselves into the national might and why Indonesia, whose GDP is very roughly in the vicinity of Russia's (3.027 vs 3.745 trillion) remains merely an important regional nation (plus most populous Muslim state), while Russia is a global player capable to shape world events and in this case Russia is "not punching above her weight" (another beaten to death cliche), unlike US, but stays entirely within her weight category, which historically was and remains heavy. I do sympathize with Assange's activity somewhat, in the end, he and his organization, did a lot of good in helping to open the eyes of many people globally on the scale of the corruption and evil which resides within political system which self-proclaims itself being holier than thou. But that is the limit to which Mr. Assange should confine his "analytical" activities since, while often doing a good deed, he remains quite arrogantly ignorant on many key global issues and makes statements whose veracity doesn't stand a chance against overwhelming empirical evidence to the contrary. After all, the term hacker has "hack" as it root and that who Julian Assange is. In the end, even "serious analysts", using Assange's lingo, had to admit that they basically know shit about the world outside. As Correlli Barnett wrote in one of his seminal works: 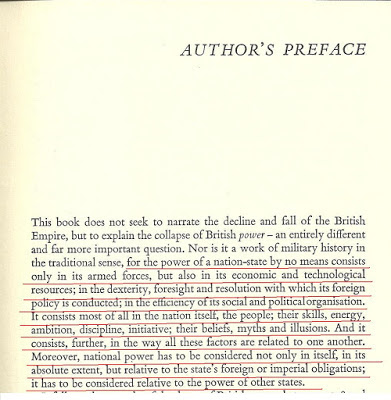 But then again, Barnett, being one of the most brilliant historians of the 20th century, I am sure, is not on Assange's reading list, after all, does Barnett know C++?

It is 4 days before elections, unlike anything US had in the last 70+ years. Too much is at stake.