Russians Will Get It Immediately....

Masha Zakharova knows Russian memes and slang. At the meeting of Lavrov and Blinken two days ago she captured Sergei Lavrov in the most symbolic and hilarious moment. What is Lavrov's message to America? 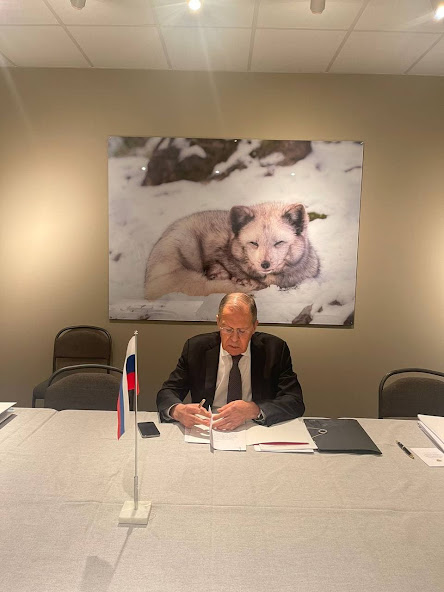 Russians reacted immediately with a Homeric laughter and, really, you cannot make this shit up. Lavrov is captured sitting in a front of a large wall photo of the Arctic Fox (no, not our dear common friend Arctic Fox) but the animal. In Russian, arctic fox (pesets) is a street-smart and less offensive euphemism for pizdetz, which is, speaking in general means being killed, fucked up or derailed by a... cunt. I know, I know. Everybody in Russia knows what arctic fox (pesets) is and how it approaches. Famous Russian saying is Пиздец подкрался незаметно (Pizdetz approached unnoticed). Knowing Lavrov and what and who he represents one, literally, cannot get better visual representation of Russia's stance towards the US.

In terms of Pizdetz, pardon, arctic fox approaching unnoticed--now Chinese scientists question the validity of a rather known BS of anthropogenic global warming cult but this:

The National Weather Service has issued a blizzard warning until Sunday morning on the Big Island of Hawaii. The warning remains in effect from 6 p.m. Friday until 6 a.m. Sunday as up to 12 inches or more of snow is expected on the island. NWS also warns residents to stay indoors as forecasters predict winds gusting over 100 mph. "Travel could be very difficult to impossible. Blowing snow will significantly reduce visibility at times, with periods of zero visibility," NWS's weather warning reads. Aside from the blizzard warning, a Kona low is expected near the islands starting on Saturday night. Kona storms are a type of seasonal cyclone in the Hawaiian Islands, usually formed in the winter from winds coming from the westerly "Kona" direction, according to N. Kona lows often bring about wet and "unsettled" weather.

Surely looks like Pizdetz, pardon me, arctic fox approaching unnoticed for dumbfucks from Western media and woke cult, including actual "scientists" who are ready and do trade scientific integrity and objectivity for perks of belonging to a so called "lefty" (in reality neoliberal and, in reality totalitarian) fascist "model" of the world which is currently imploding under the weight of empirical data and actual science. They just didn't notice how Lavrov approached together with an arctic animal behind him in a photograph.