A Bit Of Economic News.

When speaking about basic facts I made one mistake, Russia's manufacturing grew in 2021 (relative to successful 2019) not 6.9 but 5.9% which is still very impressive.  But the news from the processing industries--that is where the value added is highest--is even more impressive: the growth is 9.2% (in Russian from Rosstat).

Remarkably, the US and Qatar are redirecting LNG tankers from Asia to Europe because European natural gas prices are, well, insane. So a lot of money to be made there while the going is good even despite the demand shrinking somewhat, which is only natural because many simply cannot afford to exist in such economic conditions. I don't know how Poland will be able to escape inevitable blame for insisting on the market-determined gas prices, but then again--it is purely EU and European Commission matter, let them start throwing turds at each-other. Hungary and Serbia were the smartest ones, they simply signed long terms contracts with Gazprom and are sitting pretty (probably with pop-corn) observing this whole clusterfuck in EU.

Per Russia's ultimatum. There were some objections to calling it that, but my response is simple: if it walks like a duck, quacks like a duck and looks like a duck, then there is a good chance that it is a duck. Same here:

Judge for yourself. But in general, many people missed one very serious moment in all of this back and forth between Russia and NATO. Russia threw the US off balance. This is simply by implying an escalation dominance in the areas which Russia historically deems crucial for her security. Ukraine is one of them. Is there a degree of ambivalence in Putin, Lavrov, Shoigu's and other statements? No doubt about it, there is a certain small degree of it which makes the other side guess WHAT will be the response if the red line is crossed. The military part of this response is somewhat predictable when it comes to Ukraine, but what else, what else--Russia is ready to discuss it and she is in the open with her concerns, let's call it like that for now, concerns. Aegis Ashore is one of that--both in Poland and Romania. Plus, Vladimir Putin was not this time generous towards Western "partners" and speaking at the Board of Ministry of Defense couple of days ago admitted that even written obligations from the West are pretty much worthless. But still, better than verbal promises alone.

And while Russia's economy is still recovering from the ruins of 1990s and early 2000s, it is clear that it is large and self-sustainable enough to issue ultimatums not fearing any economic consequences. I would even propose that shopping in Moscow, St. Petersburg or Kazan is in no way inferior to visiting Paris or Milan boutiques which sell brand crap for ridiculous prices designed for the type of public which in Russia is known as нищеброды (difficult to even translate properly--uncultured lacking taste pauper-beggars maybe) who hunt only for status brands and things as to be a part of a conspicuous consumption class. Yes, there are many of those among moneyed strata both in Russia and in the West. The result, very often, looks like this: 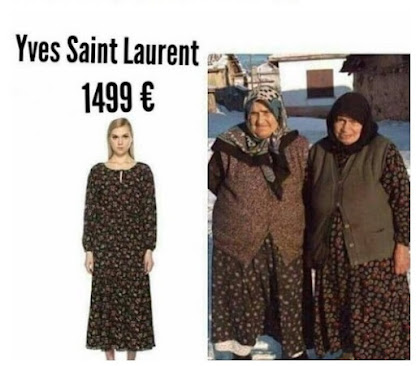 But then again, I am old fashioned, but, yes, I still love good shoes and good watches (emphasis on good, meaning beautiful and reliable). I buy my Wranglers at Walmart (and Lee's at COSTCO) and some things in Eddie Bauer. I would say that is more than enough for man's happiness. But that's just me, what do I know.
Posted by smoothiex12 at 6:48 PM