You all know the meaning of this by now, now with a simple crossword, wink, wink. 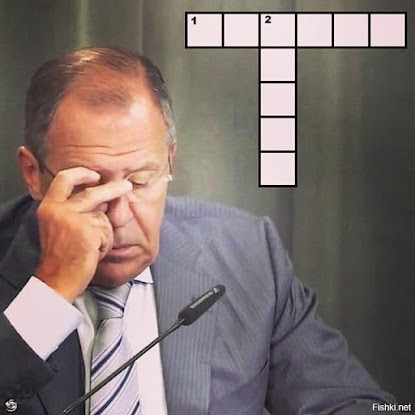 Wall Street Journal unleashed on unsuspecting "investors" (meaning a speculative capital which destroyed US economy) a marvel of an "analysis" which should be filed under the "No Shit, Duh!" title.

The U.S. is barreling toward one of the greatest self-inflicted wounds in its history. This came into sharper focus last week when President Biden suspended oil leases in Alaska’s Arctic National Wildlife Refuge (ANWR), even as Russia and the Organization of the Petroleum Exporting Countries (OPEC) announced production increases.Mr. Biden’s anti-carbon fusillade will have no effect on the climate as global demand for fossil fuels will continue to increase for decades no matter what the U.S. does. Meantime, Russia, China and Iran will take advantage of America’s astonishing fossil-fuel retreat.

I have news for WSJ's editorial board which, evidently, is packed with Captains, Majors and Generals Obvious--the United States couldn't compete with Russia in this field to start with. I clearly remember all these business "analysts" from all US MSM outlets, more than a year ago, having an acute and irrational outburst of schadenfreude expecting Russia's economy to collapse because of the oil war and oil prices being driven into the ground. I was flabbergasted by a complete lack of self-awareness of those "analysts", because it was clear from the git go that Russia will be just fine and it was the United States which would experience, which it did, a very rough awakening and facing a reality of energy markets where the US had a very weak hand.

U.S. producers reduced investment during the pandemic as demand plunged. While prices have since recovered to a two-year high, a larger U.S. retrenchment driven by government and progressive investors is on the way.

Let's start with two simple facts which were known since... forever:

1. US fracking was never economically viable. But "fossil" energy will be needed for a long time because "alternative energy" cannot provide even a small fraction of the growing demand. It simply can't in this technological paradigm, period.

2. US "anthropogenic climate change" hoax is as American as baseball and apple pie--it is a result of the US being always vulnerable to paranoia and most radical anti-scientific ideas.

It was very easy to predict where the US will progress under these circumstances as well as geopolitical consequences. Yes, guys, this is how competition works: I have what you need, you don't. It was always like that. I know, it is unpleasant to be on the receiving end but we all live with our own limitations and vulnerabilities and we make do as much as we can. Same applies to the nation-states. If those nation-states go bananas and become irrational like the EU which wants to turn "green" by 2050 and plunge hundreds of millions of people into economic misery--let them, let's see how long those cretins will survive before a raging hungry mob with pitch-forks (or AK-47s) will start hunting their asses. You can bet your ass on the fact that Russia and China will be watching this clusterfuck from a distance in total amusement.

So, WSJ laments now that Putin is happy? Well, why not? Russians know how high a price is paid for ideological orthodoxies. West's ideological orthodoxies from institutionalizing a sodomy, sexual deviancy, obverse racism, cultural and moral relativism to pseudo sciences of gender, MMT and MMGW--hey, all ingredients are in place to see the whole goddamn thing implode with catastrophic consequences for Western people. Remarkably, WSJ helped to further this agenda, which, of course, its editorial board would deny. But facts are stubborn thing--WSJ is an utterly globalist rag on the service of the same cabal which for decades promoted crazy economic, geopolitical and moral ideas. So what's the problem? I don't see any. After all let's recall the name of this rag--Wall Street (mind you, not the Main Street) Journal.  And that in itself speaks volumes.