Putin Is Losing All The Time, A Short Note...

For those who assess modern geopolitics by the appearances in Western media, and want Putin to behave like an...American politician, spewing BS and trying desperately to look good--you better check your contact with reality. Most of the world does not give a flying fuck about West's public opinion anymore and Western media are today laughed at all over the world being viewed as crude pathetic propaganda and spin-machines. To illustrate some actual geopolitical dynamics we take...Turkey.

Here is a recent poll by Areda on who the Turks want to see as their ally, the US or Russia. Well...

Here is a translation:

RUSSIA IS OUR STRATEGIC PARTNER” When asked “How would you define the relations between Russia and Turkey” in the survey, 58.2 percent of the respondents said “there is a strategic partnership”. Other answers to the same question were as follows; "10.5 percent are cooperative", 6.5 percent "close cooperation", 4.5 percent "neither cooperation or problems", 9 percent "problems", 11.4 percent "hostile." "WE DON'T TRUST THE USA" When asked about the relations between the USA and Turkey, which was asked as "Which of the following options best describes the USA in terms of its relations with Turkey", 35.5 percent of the Turkish people said "unreliable". While 32.8% of the citizens said to the same question as 'colonial country', the other answers of the participants were as 'strategic partner' (18.3%), 'enemy country' (12.4%), and 'friendly and allied country' by 1%. RUSSIA YES, USA NO

In general, here is the main conclusion of this poll:

CRITICAL CHOICE IS FOR RUSSIA If you were to choose between the USA and Russia, the answer to the question "Which country would you like Turkey to develop more relations with?" was answered by Russia with 78.9 percent, while the USA remained at 21.1 percent. 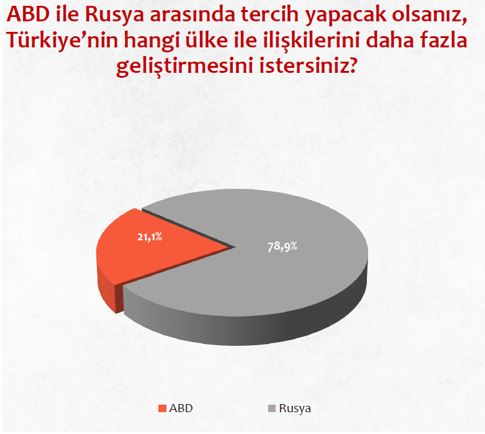 So, can we, please, stop this BS about US media declaring this and that--NOBODY cares. The world moves differently, it operates on different premises and US WILL declare the "victory" at the "summit" no matter what. US media will also proclaim that the US is the founder of Sumerian Civilization, that they defeated Carthage and Napoleon and the US is the best thing in the universe, like ever. Live with this. The real conversation will never make it into the "free" (from professionalism and human decency) Western media, who are now a bona fide lie machine. So, don't worry, Russians know that and Putin is just being courteous by talking to them. Period, nothing less, nothing more and Russians are aware of the outside word in general and the US in particular orders (like many orders) of magnitude more than the same could be said about the other way around. I guess, Turks do not watch and read Western BS and make their own conclusions and those are radically anti-American moods and, surprise, surprise, are very strategically pro-Russian. I will repeat--the United States is an economic and military dwarf compared to emerging Eurasian common market and that is what the US tries desperately to prevent. Judging by Turkish moods--not very successfully. Boy, Putin is losing today especially badly /s.
Posted by smoothiex12 at 11:59 AM