Yet Another Victory... Not.

News pour in and people begin to feel nervous. How else can one describe this:

As Karen Shakhnazarov proposed yesterday (in Russian)--the whole oil war couldn't have been started by Saudis without US blessing, if not planning. I agree. As much as US depends on Saudis for a number of things, Saudis are what amounts to an American vassal. I don't think they planned it well, to start with--not surprising, once one notices a very weak grasp by planners in D.C. of causality and their inability to calculate consequences, which became a feature of US strategies in the last 20 or so years.  Russia, meanwhile, is what supports China in China's rear through the growing network of oil and gas pipelines and this strategy, if you will, is what matters above all for China which is beginning to be pulled into the war with the United States. So much so, that ideas like this are taking over discussion in the public (media) space.

Mid-2020 saw the world at war, actual strategic war as far as the Forbidden Palace in Beijing was concerned. This was almost disbelievingly acknowledged by some in Washington, DC, London, Canberra, Ottawa, New Delhi, and Tokyo. It was a war that was viewed tentatively and with incredulity in much of the West because it was a war of a very new type. And it was a war in which the West — for the first time in a century or more — did not write the rules of engagement.

For me personally it would have been an extremely interesting undertaking to discuss those ROE (rules of engagement) and how they are "written", especially against the background of the United States going out of its way to sabotage, as an example, Nord Stream-2, by means of putting Germany in her place as the US the doormat, but as the the author discusses and questions "kinetic" options, he arrives to this "conclusion":

So where and how would kinetic operations begin? It seems clear that Beijing is reluctant to initiate military action, but is ready to engage once it has begun. Both the PRC and the US see advantages and disadvantages in delaying decisive tactical or theater action. The path to escalation to nuclear engagement is also far less clear — and deterrence far less sure — than during the NATO Warsaw Pact “mutually assured destruction” era. There seems a greater willingness by the PLA to engage in nuclear capabilities (ie: against military targets). Military action in the near-term could well consolidate the PRC position in its “near abroad”. It could even achieve de facto or de jure control of Taiwan, a critical legitimizing goal for the CPC, if the US did not rush in tripwire assets and support to show a preemptive tripwire to deter PRC escalation. But what after that?

He even goes as far as to refer readers to a peculiar document titled:

It is a "fun" paper (yet another one among many produced within "intellectual" kitchen of the Beltway thinktankdom stuffed with former military top brass and government bureaucrats), which through repeating  same ol' "we are about to die", a euphemism for "we need more money", provides for a full spectrum of all those good ol' cliches about "atrophy" of skills and, using Pentagonese, calls on:

To meet those intensifying military challenges, DOD will require rapid, substantial improvements to its capabilities built on a foundation of compelling, relevant operational concepts.

It is a dazzling, in its emptiness, linguistic miasma, which still doesn't answer the main question of what are "relevant operational concepts". OK, I get it, Gary Roughhead--one of the authors--is a an Admiral and he was in the position of CNO (Chief of Naval Operations) in 2000s for 4 years, so he must have a profound understanding of the subject matter and he should be able to answer the question on how he is intent to do this:

In the end, what is "operational concept"? Operations (or operation) is defined by Russians (and they know a thing or two about subject matter) as such (in Russian):

A set of coordinated and interconnected in goals, objectives, place and time of combat engagements, battles, strikes and maneuvers of troops (forces), conducted simultaneously or sequentially according to a unified conception and plan for carrying out tasks at a theater (theaters) of military operations, strategic (operational) direction or in a certain vast district (zone) in a specified period of time;  form of military (combat) engagements: Operations are  distinguished by scale, type, and class of military engagements, time and sequence of carrying out. On the scale: Operations can be: strategic, that is operations by whole armed forces and a grouping of forces on a theater of operations; operational-strategic: army groups, fleets (flotillas) etc.

In other words, the whole thing rests with one's ability, putting it in layman's lingo, to accumulate enough forces and materiel and engage them in such a way against the enemy that the enemy is crushed and all military and political objectives on the theater (of operations) are met. I, so far, know only one operational concept the United States provided in terms of modern warfare--it is throwing more money at the Military-Industrial Complex without any regard to economic and military-technological reality, which, inevitably, resulted in a dramatic, generational, lag in modern weapons and in de facto losing economic competition to China. Sure, the United States still can produce some magnificent things, such as microchips and some (cough-cough) commercial aircraft, but China's production of the main industrial "predictors" ranging from steel, iron, concrete to many machines dwarfs that of the United States. And I mean dwarfs. Just take a look at this picture:

I guess no comments are necessary here. And we all understand that such production of steel translates into such highly finished goods as ships, combat and commercial, structures, power plant, machines and... and weapons. As you may have guessed it already, US being outproduced in this field by China (and Russia) by almost twelve fold, has very little chance to win this kind of the competition. Of course, other crucial strategic metrics do not look that good either: 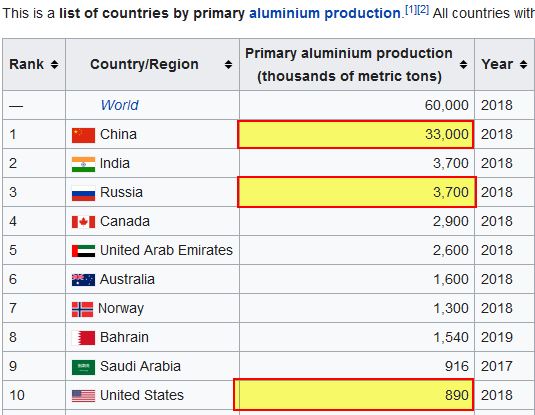 Of course, after Covid-19 demonstrated to the world US dependency on China even in such a crucial field as pharmaceuticals:

This whole "operational concept" thingy begins to stink to heavens once one begins to look at and into tangibles, trying to assess how the United States is going to go to "war", especially a kinetic one since, after all is said and done, what is left are weapons and people which are in the foundation "operational concept" and weapons need to be produced, as in manufactured. Here the United States runs into problems immediately. Make no mistake, I will always bet on US Navy's submarine force against China, especially in the operations on Shipping Lanes of Communications--I am consistently on record regarding this fact--US submarine force, for all degradation of the US military, remains its crown jewel and it is, putting it bluntly, better equipped and trained than PLAN's submarine forces. It is simple as that, but I can now predict what any "future" relevant "operational concept" for the United States will look like when considering those kinetic options against China--it will be same ol' AirSea Battle, aka Joint Concept for Access and Maneuver in the Global Commons (JAM-GC), and it is a euphemism for the same ol' stand-off weapons being hurled at whatever the targets will be identified in mainland China and in her littoral from every platform the United States will be able to assemble away from zones of reliable detection and target acquisition by Chinese anti-ship missiles and combat aviation and that doesn't look good for the United States, to put it mildly, especially considering very serious difficulties of US air defense dealing with a number of the missile threats, especially, if to believe Chinese, their maneuvering ballistic missiles capable to hit US aircraft carriers. What is absolutely positive, is the fact of the Chinese missiles being able to hit Guam.

The question, thus, is not about if the United States will be able to "update" itself for a real war with China--I doubt this will happen, but that's just me, I could be wrong--but the scale of losses, including extremely sensitive politically, the United States will be willing to take. It is one thing to start getting coffins arriving daily in large numbers (anyone really thinks the US is capable to fight China in China proper in a large protracted combined arms war?), totally another--starting losing ships, capital ones, as a result of such a kinetic option. Especially when the US will run out of stand-off weapons. Mind you, China is the size of US lower 48 and, unlike some "mighty" Arab militaries, actually has a fairly good Air Defense system which will be able to do a decent job in protecting those energy streams from Russia, while unleashing North Korea at South with a single purpose of making US forces there miserable. And then there is Russia... Russia, Russia, Russia. You can bet you ass on Russia not allowing China to collapse and Russia does have tools to do so. After all, Russians are royally pissed off at the United States and may (and most likely will) decide at some point that Noblesse Oblige doesn't apply anymore and, apart from making sure China has all necessary energy to sustain the fight against the US, she may exhibit a "strategic flexibility" and provide China not only with a world class intelligence and reliable targeting, but actually, recall Korea and Vietnam. In the end, China is an enormous and lucrative market not only for Russian energy but advanced technology too. Markets must be protected and Russian-Chinese trade is order of magnitude larger than Russian-American one.

But speaking broadly,  the American political class' insanity, which resulted from losing US status as premier global industrial powerhouse and self-proclaimed "finest fighting force in history" is a first sign of the dawning if not of the realization then of the sense of a final departure which there are no peaceful and sensible solutions left to stop it, only desperate "kinetic" options which will result in US military defeat and collapse of the dollar-based international financial system. Or rather dramatic acceleration thereof. In this case no amount of strategizing and conceptualizing will help, because in the end it is the ability to produce tangibles, from steel and food with medicine, not credit ratings (fraudulent as they are) or virtual worthless money, which win those kinetic options and that ship for the United States sailed long ago. Remarkably, the sailing of this ship was hailed as yet another American "victory", which it was not.
Posted by smoothiex12 at 3:40 PM