ADP National Research Institute report on unemployment is out and it is devastating: 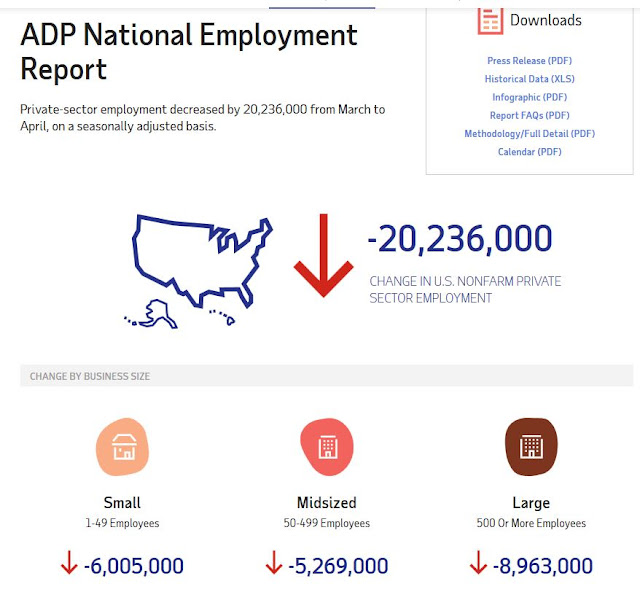 As a result, which is strange (it should be really high because the worse off is the country, the better are earnings  /s) Dow Jones even dipped couple of points into the negative territory. By far more important is a new normal--a chaotic behavior of oil prices which grow, then fall, then grow again, and which is, I guess, a "normal" behavior for the so called "free" (free from any responsibility) market. As it stood in the morning: Urals was up, the WTI was down--a mixed bag.

It is obvious that the devastation--and we still do not know the full extent of it--at the labor market is a decisive factor in erratic behavior of everything and of nearly everybody, especially against the background of some Green Berets obviously losing their bearings and trying to...

Kidnapping Venezuelan President Nicolas Maduro and bringing him to the US was the objective of a failed incursion into the country, one of the two captured US mercenaries said in an interrogation tape released by state TV.Two employees of Florida-based security firm, Silvercorp, have been detained by Venezuelan forces in connection with the failed invasion.The only instructions he received before Sunday's botched operation was to take control of the airport in order to facilitate the transfer of Maduro to the US, Luke Denman, one of the detained Americans, said in the footage.

I think watching too much Hollywood and fighting Arab and Afghan peasants in sandals armed with AK-47s, under the umbrella of own Close Air Support, may have created a false sense of own invincibility among perpetrators, but judging by this "operation", one has to seriously question not only professional but mental merits of people who planned it. I merely scratch my head in disbelief--what the fvck were those people thinking? Venezuelan Armed Forces may not have intercontinental ballistic missiles and satellite constellations, but they sure as hell have radars, night and IR vision, patrols, even aviation and modern communications and know how to use them precisely for the purpose of tracking all kinds of strange people from the the US and its "allies" (Columbia, anyone) around itself. Russians may have helped also, but that is just me speculating. Even more astonishing is the reward which whoever planned this BS offered to them--between $50 and 100K for taking airport and facilitating Maduro's transfer to the US? Dude, they framed you for the price of the fvcking new 2020 Ford 150 Limited Truck. That's it? Boy, the going rate for "regime change" mercenaries, certainly, went down as of lately.
Where are those wonderful times when Arnie, totally out of fatherly duties and love, would go out completely alone and kick the ass of a battalion or two of all kinds of international (and domestically grown) commandos.
I miss those times, including the times when Alicia Milano was merely a charming child, not four-wheel drive feminist bitch supporting Hillary and advocating for vegan lifestyle, yes, by endorsing America's main vegetable Joe Biden. You see, everything is falling apart, but who cares, right? As long as stocks go higher, the ADP report will be forgotten in a couple of days, until next report. At least we know couple of unemployed Green Berets are now off the US government balance and are provided three hot square meals in whatever high security Venezuelan facility they are being held on charges of being complete morons. At least they can thank God for being in Venezuela, not in some Taliban underground prison. In other news, Pompeo called Lavrov, again, and "discussed" issues of Arms Control (in Russian). Obviously, "the forms must be obeyed" before the United States kills START. And it will kill it and then... and then what? Judging by the "quality" of operational planning demonstrated in Venezuela, one should seriously ask the question if the United States will kill itself first before killing everybody else.
Posted by smoothiex12 at 1:04 PM