So, What's The News?

The US and British navies sailed into the Barents Sea to conduct maritime security operations in the Arctic Ocean, US Naval Forces Europe-Africa said in a release Monday. US Navy destroyers USS Donald Cook, USS Porter, and USS Roosevelt and the British Royal Navy frigate HMS Kent, supported by fast combat support ship USNS Supply, sailed into the Barents "to assert freedom of navigation and demonstrate seamless integration among allies," the release said. The Barents, part of the Arctic Ocean, is north of Norway and Russia. Russia's Northern Fleet, which maintains the country's naval strategic nuclear forces, has its headquarters at Severomorsk on the Barents. The US Navy said its surface ships haven't operated in the Barents since the mid-1980s and that it notified Russia's Ministry of Defense of the operation on May 1 "to avoid misperceptions, reduce risk, and prevent inadvertent escalation."

I am sure in Kremlin they are drafting now the declaration of the unconditional surrender and are preparing to surrender city keys from Murmansk and Severomorsk. Reality, of course, is much more prosaic--navies go wherever they can go and as long as they remain outside territorial waters of any state and do not violate status of the exclusive economic zones--they are free to roam whatever they want. Nor, this BS about "since mid-1985" corresponds to reality since submarines of the US and Royal Navies are not rare guests in those altitudes. In this particular situation, however, it is an attempt to demonstrate flag, "send the message" and other PR objectives, including initiating some news stream, to demonstrate a dispirited public that NATO exists still, sort of, and that NATO fleets still have operational assets.

This action has no military meaning since any surface force sent to actually fight--from launching TLAMs to conducting ASW operations--to Barents Sea in case of actual war has the staying power approaching zero and time counted in minutes it takes to receive targeting and launch, and Russia has in Arctic more than enough to launch to ensure that no hostile surface force in any combination survives. Just recall basic (of course it is slightly more complex that that but still, gives a good impression) factors which I wrote in my last book about: 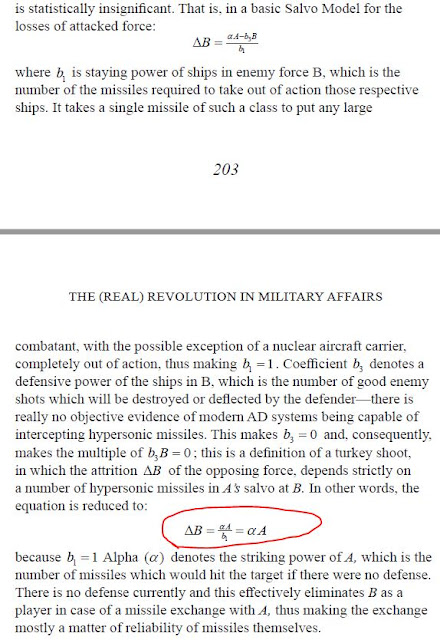 This is what makes, as an example, Northern Sea Route so attractive to China and its commercial traffic, granted China can sustain pressure and possible expropriation of assets of its pro-American elite, the one which until very recently was viewing China as an extension and, eventually, substitution for the United States economically. There are many of these guys, and their children, in the US and they own a lot. Once the United States decides (not out of realm of possibilities) to cut Indian Ocean SLOCs for China, the whole thing will become really interesting. The United State, by the looks of it, is getting ready to coerce China and squeeze it for everything she has got. Rumor has it, Xi must face still powerful radically pro-American (some call it a Chinese "Komsomol" elite, I can see the relation) economic block which cares only about its pockets.

This is not to say that the United States is in a good shape herself. And, in the end, China can always go ALL IN for petroyuan and the de facto fragmentation of the energy, and with it a whole, market will happen. The infrastructure for killing petrodollar in Eurasia is already in place, so it falls, naturally, to Russia to make sure that any moves on the American part stay non-military in nature. As for demonstration of the flag, sure, why not--it is always a great opportunity for Russian VKS and Navy to train on actual potential targets--business as usual. Nothing to see here, folks, move along, move along....
Posted by smoothiex12 at 11:24 AM