What Is This All About (INF Treaty, Again).

An interesting piece of news today caught my eye. At the expanded Ministry of Defense board in Moscow today, Shoigu informed about this:


"In November, the strategic Tu-160 missile-carrying bomber that underwent modernization successfully test-fired 12 Kh-101 airborne cruise missiles at the Pemboi range located beyond the Polar Circle," the defense minister said. The bomber made the salvo launch of missiles on the instruction of the Russian president, Shoigu said. The Russian Armed Forces are building up their strike potential to counter the deployment of the US global missile shield, Russia’s defense chief said

This announcement came on the heels of Putin himself asking a rather obvious question, which I was and am asking since the signing of this proverbial INF Treaty in 1987 and made my position (however inconsequential for the fates of the arms control regime) known not for once. President of Russian Federation was pretty much in the same vicinity today when stated that he still cannot understand why Soviet Union disarmed unilaterally and de facto accused Gorbachev of treason (in Russian). So, I think, at this stage this pretty much sums it up for Gorbachev and his cabal's activities, but let bygones be bygones and let Gorbachev die a pathetic loser.

Yet, the issue of INF Treaty still remains and it all comes down to a technological dimension. Russia does have a cruise missile salvo at mainland USA already and the weight of this salvo by very long range X-101/102 cruise missiles will only grow which comes with the program of both update and new construction of TU-160 strategic bombers. And then, of course, there are persistent rumors about future PAK-DA strategic bomber and whatever new cruise missile it will be carrying. Just two TU-160s landing in Venezuela last week created a rather furious reaction on the US side with Pompeo (who is neocons' neocon) providing a diatribe:


The Russian and Venezuelan people should see this for what it is: two corrupt governments squandering public funds, and squelching liberty and freedom while their people suffer.

Pompeo, obviously is not well informed about "suffering" of Russian people, for all very legitimate Russia's economic issues, but such an ignorance is expected from US top brass, especially from utterly corrupt organization which pretends to have something to do, for unknown reasons, with the art of diplomacy. But if to look pass increasingly irrational, bordering on hysterical, rhetoric emanating from Washington, Pompeo and others' worries are not without some rational justification, it is purely military one and the salvo of 12 X-101s in November from a single TU-160 surely serves as a good demonstration of the capability of these bombers to strike US territory both over the North Pole and from the South of the US proper. 24 X-101 missiles is a very serious argument in such a strategic consideration.


Russia will continue to press the issue purely militarily; that was the whole idea from the inception--doing so in the field in which Russia pulled ahead dramatically in the last decade. Russians know that the US proper doesn't have really serious Air Defense, US anti-ballistic missile defense is also of dubious quality and it is, certainly, not designed to deal with serious, massive, salvos of stealthy, low flying cruise missiles. Russia is taking the "war" (or threat, if to be academic), a conventional one (Russia continues to be able to destroy US in nuclear exchange since 1960s, same goes the other way around) to the US proper. Putin, today, again was absolutely nonchalant when responding to the US leaving INF Treaty when speaking about ground-based missiles:

Translation: And, as you understand, since we have such sea and air-based systems, it wouldn't take much effort to conduct appropriate R&D and make them ground-based, if necessary.


I guess this sums it up pretty well and while the actual role of the arms race, traditionally grossly exaggerated, primarily based on statements by none other than Gorbachev, who continues to lie non-stop in order to whitewash a disaster his "rule" became, in the collapse of the Soviet Union is yet to be competently and seriously studied, there is very little doubt today that Russia, actually, is not against some form of "arms race" with the US. In fact, Russia got the US almost exactly where she wants her under present circumstances—Russia poses a threat of both nuclear and conventional (counter)attack on US territory. Russians know for sure:

1. That the United States has a legitimate need for updating her nuclear deterrent, as an example. Ohio-class SSBNs are becoming not only very old, they are also not as "invincible" as US propaganda likes to portray them. US also is in need, and its growing exponentially, to address the air (missile) defense of US proper and US is also in dire need for a doctrinal rethinking of her navy and ground forces. Here, we come to the next point:

2. American military manufacturing is not enormously expensive, it is prohibitively expensive especially in relations to a very hi end systems such as C4ISR. Russians know this and Russians can count too, even when having to navigate a jungle of American budgetary lingo and bizarre bookkeeping.

So, Russia is pretty content with nuclear weapons "competition" since she knows quite well what it may cost US to "offset" Russia's advantage in such systems. In general, this latest Russian MoD board was fascinating in many respects. Be that a number of 31 Yars and Avangards getting into full operational capability, or the fact that MiG-31Ks patrol now both Caspian and Black Sea on regular a basis (89 patrols with practical launches of Kinzhals were conducted so far this year)—this all testifies to a massive shift in military-strategic balance in the world and we are not even in a full disclosure mode on full capabilities of new weapon systems nor about what else is coming soon. One can only guess, granted with high degree of reliability, that by the end of decade of 2020 we will cross (if we all survive) into technologies which will completely redefine the way war is conducted between states—it will be very long range, hyper-sonic, low-observable, new physical principles-based and will leave no protection to those who still buy their own BS about exceptionalism.


Somehow, recent tone of many US "establishment" media, such as this ignorant piece by Dmitri Simes, testifies to the fact that:

1. Putin's March 1st address to Federal Assembly did finally sink in in the US. Now, delayed by the primitive arrogance and desire to view itself as a big honcho, reactions begin to pour in and a range of a bizarre (often self-medicating and delusional) "doctrines" designed to address own increasingly manifest weakness is simply astonishing;

2. The growing realization that currently there is absolutely no even a faintest idea on how to extricate the United States from a serious existential crisis she faces and appearance of such an idea within US "establishment" is completely precluded because of the utter incompetence of people who run the US today, from her media, academe to political top.

American ruling "elite" turned out to be a one trick pony and, as the old saying goes, you cannot teach an old dog new tricks. As failed experiment with Trump has shown, the United States will continue on her path to utter bankruptcy, unable to correct trajectory (mediocrities, who are in charge now, need not apply), and the main task today remains to prevent a global war, which is increasingly seen in the US by some as the only way to avoid a day of reckoning. Needless to say, this war is seen as possible in the US by people who have zero knowledge and qualifications in serious military issues and it is not a bad idea to keep reminding all kinds of neocon trash which runs Empire today from their comfy country clubs and offices that many of them will have their own personal conventional 3M14 or X-101 with their names on them if they decide to push for the real deal. 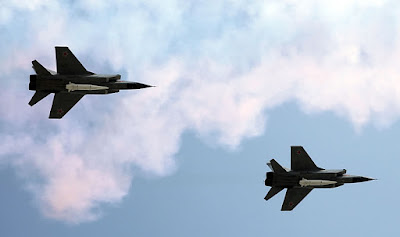 UPDATE: Damnit, the moment I finished this post, GAO publishes their latest (and freshest) report and guess what, here is what they state (unless, of course one wants to accuse them in colluding with Russians):

The main question, of course, is: how much will it cost and when anything even remotely capable of dealing with a single hyper-sonic missile will be created in the US? I know part of the answer: it will take many years, it will cost astronomical sum of money and it will be marginally effective, if at all.
Posted by smoothiex12 at 9:29 AM