I was extremely busy this month (moving and other things) and I hardly had time to post much. But since Saker posted today this at UNZ Review, I decided that it is as good of a time as it will get to point attention to this:

Talk about the "blasphemy" on a grand scale, since these news made it not only to the pages of WaPo, but also to CNN. All this "blasphemy" originated in the Center For New American Security think-tank.  The report looks at several ways of optimization of Pentagon's budget (nothing new here) and uses some fairly familiar "Hi-Low" lingo: remember Zumwalt and Project 60? And views, as CNN reports: Despite cutting the Ford-class carrier program after only two of the four planned ships are complete, the three think-tank experts said their plan will ensure that the US still has 10 aircraft carriers by the end of the decade due to their 35-year lifespan, but that the carriers would take on new functions, acting as prepositioned operating bases around the world.

The phrase which really caught my attention was this: Investing in the airwing gives aircraft carriers utility going forward, Hendrix said, noting that long-range strike aircraft would allow the carriers to sit out of range of Russian and Chinese anti-ship missiles.

This really makes one scratch one's head, trying to figure out what is missing in this picture. That, certainly, happened to me until I had my Eureka moment and referred myself to my own writing. Namely, and I quote myself, while giving some simple example: It starts with a simple realization of operational reality of Russia's Air Force, whose air superiority, air defense (intercept), strike, refueling and early warning assets are located exactly around both Vladivostok and Petropavlovsk-Kamchatsky.

American military thinkers, it seems, consistently forget to take into account that even if US Navy CBG(s) is (are) "prepositioned" in such a way that they can "sit out of range of Russian and Chinese anti-ship missiles", which in itself is a very difficult proposition to start with, their air-wings WILL encounter, in case of Russia (I will abstain from discussing China's capabilities), a very competent and numerically superior Air Force. Interestingly, those thinkers also forget that those Russian planes are long-range, all have refueling capability, and do have capability to launch a plethora of long-range anti-shipping missiles at CVN. From various iterations of high supersonic X-31 missiles to air-launched Brahmos, to sub-launched Kalibrs--the menu of weapons which can strike "prepositioned" CVN is very rich, to put it mildly. It is also very doubtful that deployment of US Navy's attack subs (SSNs) well within the ranges of Russian ASW aviation and SSKs, who are a very serious threat to any, even most advanced,  SSN, will be easy. 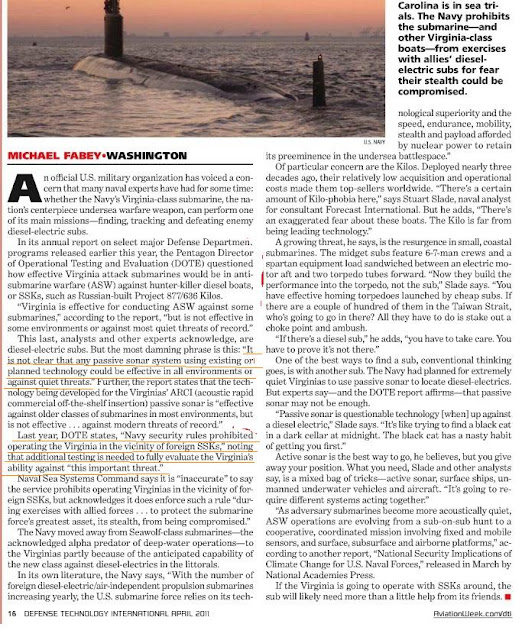 It has to be understood that US Navy is "stuck" with its aircraft-carriers and operational concepts which follow--that is "power projection" against some third world hellholes where carriers don't have to deal with either serious air force, capable air defense or this ever-present problem of "leakers" (such as one, two or three 3M54) which can ruin the day by taking out AEGIS escorts. After that the fate of CVN will be unenviable. It is clear for any attentive observer (and people from CNAS do have some pedigree) that in the last 20 years the naval warfare paradigm changed dramatically and with it changed the role of carriers. Yes, they are great for power projection, as current deployment of venerable Admiral Kuznetsov into the Eastern Mediterranean shows. This old-timer, once his CBG reaches the station, will do some "power projecting", thus training its air-wing, including validation of combat capabilities of newest MiG-29Ks, will kill some terrorists and will demonstrate the flag. Some people will get combat awards and all this is fine with me. But in real war between serious nation-states, or alliances of those, neither Kuznetsov nor any Ford-class CVN have any chances of survival against determined,  competent and well armed adversary.

A salvo of 8 or 10, let alone 12 or 16, 600-700 kilometers range, high supersonic anti-ship missiles from different directions is a problem which alone is a grave threat to any, even most advanced, surface combatant. When this problem is compounded with CBGs air-wings engaged in the air battle for own survival against aircraft and pilots who are as good, if not better, as those of air-wings, one has to ask a question which authors of CNAS' report ask implicitly and quite explicitly answer it--the age of those magnificent mammoths is over and no number of reshuffles of the outdated operational concepts will save them. The coming of hyper-sonic, long range weapons (and they are already here) overturns current fleet air-defense as we know it completely. And maybe the authors of this report do have a point when they propose to invest into lasers. After all, for Mach=6 ASM (that is 2000 + meters per second, or 2 kilometers per second) it would take somewhere between 15 to 20 seconds to cover the distance from where it, maybe, will be detected to the platform which will detect it. Good luck shooting it down, even more luck of shooting down the salvo of those.

US Navy will continue to be forced, as it was in 1950s when US Navy found the role for carriers as reserve (secondary) nuclear strike platforms, time after time to grasp for sinking concepts in order to preserve its CVN Fleet's "power projection" capabilities, a lot of juicy captains' and admirals' positions and, of course, visuals, that is until the first salvo of a serious war is fired. Or, as late Scott Shuger, himself a carrier officer at some point of time, noted in his late 1980s piece: Even a 28-carrier fleet would not ensure the success of wartime operations involving carriers. The navy's scenarios for those operations are unrealistic. For example, theyfail to allow for degradation of carriers' defensive capabilities as hits accumulate, imperfect weather conditions, conflicts between the power projection and air defense missions,and potential changes in the composition of Soviet bomber and submarine forces.
It goes without saying that since then, missile strike capabilities changed dramatically, if not in a revolutionary way, aircraft carriers--did not. And that is the problem for carriers and their operational concepts. As Commanders Gattuzo and Tanner, both--enormously experienced carrier aviators, noted: "Money spent furthering manned aircraft technologies and programs—the CVNX (proposed Nimitz-class carrier replacement) being one of them—is like polishing cannonballs so they will fly a little farther." 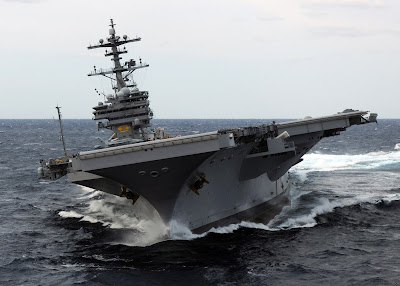