When Main Battle Tank T-14 Armata debuted at Moscow's Victory Day Parade in 2015, let's be honest, it created a global media furor. No doubt, together with praises, a truck load of doubts was also dumped on Armata and the main of them all was the issue of costs. Few people argued with the fact that it is the most advanced tank in the world today, but what price? Initial speculations were that the cost will be so high that Russia as a whole may go bankrupt and dissolve after producing 5, 6....8 Armatas tops. Of course, how could it be any other way when "Russian scholars" (mostly from uber-liberal think-tanks, a euphemism for NATO shills) said so.

Well, realities on the ground, however, are such that 20 Armatas are already serving with Russian Army's regular tank units and undergo what is called "troop trials", a term somewhat related to IOC: Initial Operational Capability. This is after a year since debut at the Red Square. To add insult to injury, or rub the salt into the wounds, of all kinds of Western Russia's ever ignorant "military experts", the CEO of famed Ural Vagon Zavod (Ural Train Cars Factory--yes, Russians love their military technologies pass as train cars or baby food) Oleg Sienko in his recent interview to National Defense magazine confirmed what many suspected all along, that Armata is exactly three times less expensive to produce than Abrams. That means only one thing: if to believe Abrams' (or Leopard's) cost to be $8.62 million, then Armata is $2,87 million. So, does it mean that Russian Army will receive planned 2300 Armatas by 2025 (initially it was stated to be 2020)? It sure as hell looks like it. 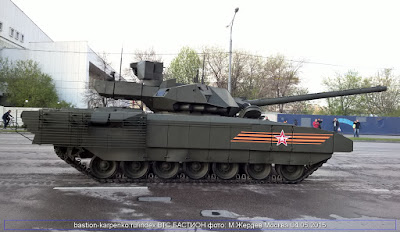 Will there be delays, rescheduling, adjustments etc.? Absolutely! It already happened due to economic and geopolitical circumstances.  No state-of-the-art technology ever was procured without that and it is quite normal. But there is no doubt that Russia, yet again, was able to complete a full cycle--from R&D to procurement--of the cutting edge military technology which in the West would have cost....cough...F-35. This technological gap with the West will continue to grow, especially so if Putin will finally make a decision which a whole nation waits from him now. If not, somebody else, not Putin, will be making those decisions but that is a separate matter and a discussion. Meanwhile, Sukhoi T-50 (aka PAK FA) is getting ready to hit serial production in 2017, with new T-50 specific engines to be installed starting from 2018.


It is not only inevitable but warranted to observe a somewhat peculiar reaction of Western MSM on a stream of real news from Russia. Behind this reaction (Russophrenia) is their never realized but, oh so palpable, "secret" desire to see Russia implode economically and Russians starve and crawl to the West on their knees. Yet, Russia somehow makes more money exporting grain than she does exporting weapons and now is world's leading exporter of wheat, still builds nuclear and diesel ice-breakers, produces micro-processors, launches satellites, builds nuclear power stations and, generally, is not willing to get scared. I guess this costs factor and ability to produce one of, if not the world's best weapons in quantities that deter any aggression is a huge part of the answer. In Russia it is always Si Vis Pacem, Para Bellum and rightly so--this is reality of Russia's history.
Posted by smoothiex12 at 1:16 PM