This is really becoming redundant by now, but I couldn't miss Susan Rice's Weekend interview to another hack, Fareed Zakaria.

Watch this interview and enjoy Rice's outlandish claims such as a pearl about "almost whole Russian Air Force" deployed to Syria. People, this is really dangerous--we are talking about people whose incompetence is so into our faces, is so manifest, is so militant that one has to ask where those people came from? I have an answer--from Ivy League degree mill in all kind of humanities BS, including so called "history" which in the West, with some important but not very numerous exceptions, is long ago reduced to propaganda narratives reminiscent of Orwell's 1984.

I understand that neither Rice nor, especially, an overt hack Zakaria have any idea about real (emphasis on real) defense issues but the former is still, for crying out loud, a National Security Adviser, while the latter still commands a significant attention of all kinds of people. I recall reading Zakaria's glowing opinions on US public education system--no person in his own mind would propagate such an open BS but there it was. The worst, however, in all this situation is that it is the White House and Obama's Administration which lacks completely any situational awareness and that is what  really scary. I understand that Rice is, probably, very good with issues of "diversity" and, most likely, can write a Ph.D. thesis on the net impact of LGBT bathrooms on the "diversity" and "cultural sensitivity" of diplomatic corps, but it was always a good idea to learn the subject before expressing any opinions on it--the risk of looking and sounding like an idiot decreases exponentially. This, however, is not the path US political "elites" take. They consider themselves above and beyond the sound and well established criteria which for centuries defined competent professionals. Now, you can imagine what kind of "advice" Obama is getting from his National Security Adviser.

In conclusion. Russian Air Forces operates more than 3,000 aircraft, large portion of which are advanced state-of-the-art fixed and rotary wing aircraft. Being a part of Russian Air Space Forces, this massive force is fully integrated with arguably best air defense in the world and with massive advanced C4ISR complex. But how could National Security Adviser to US President possibly know that. Today, US "academe" and the lucrative so called think-tankdom (aka "expert" community) stands as a living proof of a total failure of humanities "educated" corps to really comprehend what any military is about and how it fights. Things will NOT get any better. Combination of incompetence, confusion, self-deception, Russophrenia and, very often, plain simple jealousy and inferiority complexes--that is what guiding this whole, using Ben Rhodes' lingo, blob.

10 years ago, Professor Roger Thompson in his brutally honest and extremely professionally written book wrote about the Clancyesque view of the war (and military): 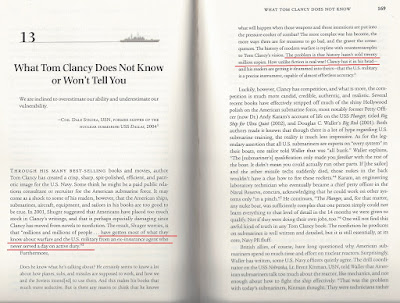 Term unprofessional is what defines today this blob--from the very top to the very bottom. Susan Rice is a living proof of that. I guess reading Tom Clancy (as Reagan did before meeting Gorbachov) is in order. Late Tom, sure as hell, made many people in Soviet and Russian military laugh.  But then again, in all honesty, Russians should shut up, they themselves, by Putin's order, endured an imbecile with furniture superstore experience in the position of Defense Minister for several years;-) I guess Pentagon and CIA had their revenge laughing their asses off looking at the tax specialist trying to figure out the difference between tactics and strategy.  Let's call it even;-)))
Posted by smoothiex12 at 12:27 PM