For any Western (European?) "scholar" who ever bothered to seriously (I underscore--seriously) study Russia's modern history and Russian national character (together with Bernard Pares and George F. Kennan this amounts to about....several people)  it could have become very clear that Russians do not cry. Well, they do, but after they cried their eyes dry, they get even, or just go overkill. Russia and Russians (whoever they are) are a concentrated embodiment of Clausewitzian dictum that :

"In war the result is never final. Lastly, even the ultimate outcome of a war is not always to be regarded as final." (c)

Now, that the emotional high after Paris terrorist acts receded somewhat it makes sense to remember those other 224 innocent Russian citizens (judging by the names' list--mostly Slavic with some possible Tartars and North Caucasus names) who lost their lives in the Metrojet A-321 crash in Egypt as a result of terrorist act. Russians paid the dues when they sent high explosive messages to IS in Syria by stating the reason for those rather deadly deliveries--"For our people" and "For Paris".

Russia pounds IS jihadists with 'For Paris' bombs

Western media's dirty insinuations, what is new, that it was nothing more than Russia's PR which pursued softening of the "West's" economic  sanctions ensued. This, by now, is typical. Evidently the thought of Russia having a genuine interest in demolishing "West"-sponsored ISIS and truly getting even is somehow lost on all those presstitudes and even if it didn't--don't expect recognition of it. For now the "West's" media machine is in overdrive trying to control image and actual political damage to its "elites". Evidently, this media sewer forgot how NATO "warriors" "greeted" Orthodox Christian Serbs in 1999 during Easter by writing a despicable "greetings" on their bombs.

For Serbs on Easter Sunday, Bombs and Blessings 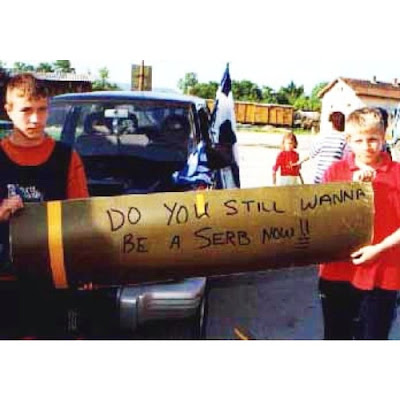 Needless to say, anti-Serb and anti-Russian bacchanalia then (and today) was a product of those same urbanized 1968 Parisian a-holes who today watch in dismay on how their chickens came home to roost. And that is my point.
Do not expect any change in contemporary "West's elites" MO. Sure, there will be a lot of rhetoric about lofty goals, and revenge and, "democracy", and ideals, and even Marine Nationale will have its field day....but...but. It was France, USA and their pathetic minions who enabled the "Arab Spring" and, eventually, brought ISIS to power and they will do very little to face the problem and tragedy of their own making. They can not--they ARE the problem. That is why, the main burden of stopping IS(IS), Daesh, what have you, falls on Russia's shoulders. "Western elites" who are responsible for lighting up Middle East on fire and nurturing Jihad as early as 1980--they are still in place, so is their media machine and brainwashed "public opinion".  Expecting any real effort in solving what today is the deadly virus killing  European Civilization? Forget it, the descent to hell is in full progress.
As for Russians. The fight continues. It will continue as it is always the case for Russia and, who knows, in the end, the appearance of Ivanovo and Pskov divisions in the skies over Syria can mark the final point in the mayhem. Will it be another "Afghanistan"? Well, the problem here is that Soviet-Afghan War in the "West" is known mostly through Rambo movies and that is why it is mostly a propaganda cliche. Sure, let's say that it will be another Afghanistan.

BREAKING CONTACT WITHOUT LEAVING CHAOS: THE SOVIET WITHDRAWAL FROM AFGHANISTAN

Meanwhile, Russia is getting even, after she cried her eyes dry and observes how "West" cries it a river.