It has been three days since the end of celebration of the 70th Anniversary of Victory in Great Patriotic War in Russia. A lot has been already written about a magnificent parade and what happened after it. I decided to take several days to come to terms with what really happened. Here are some of my thoughts.

The parade was magnificent and so is the hysteria in Western media. In fact, it is enjoyable. In the culture dominated by shallow appearances, manipulation of perceptions, which somehow is called political "science" and "journalism" (one may even get Ph.D in these "fields") and with the lack of substance, Moscow's parade was a sight to behold precisely for its substance, not, however magnificent, appearance. I will omit here the obvious geopolitical impact of political leaders, representing about the half of the planet's population, being present on the Red Square--so much for "isolation"--I want to concentrate on other signs.

1. "Armata". The bad news for West's "hawks" (most of them--chickenhawks, who never served a day in any armed forces) are next:

a) "Armata" platform and T-14 Armata Main Battle Tank is not about some appearances, albeit the tank and family of Kurganets and Armata-platform vehicles do look futuristic, but about what Russian Armed Forces were working on since mid-2000s--Net Centric Warfare (NCW). The NCW concept is a brain child of brilliant late American Admiral Cebrowski disclosed to the military world in late 1990s and it is evolving ever since. The idea of nodes, constituting a network, whose value is proportional to the number of nodes (Metcalf's Law) and their interactions, sensor and data fusion, issues of information superiority are immensely powerful ideas capable to define the outcome on the future battlefield.

For those interested, a superb summary by Alberts, Garstka and Stein:

Well, T-14 Armata is it. The tank has an unprecedented array of sensors, including AESA radar, which makes it possible to create a whole coverage over battlefield and be both a node and a command node fully integrated into the network. Tank is also capable of operating unmanned, as a drone. Throw in here all those other pesky things like the system of defense and countermeasures and you get the picture. It is the future. But Russia, is not supposed to be able to field more than several prototypes because its economy is "shredded to pieces" (c) and sanctions are about to destroy it?  Right? Wrong!

b) During Putin's meeting with military-economic block in Sochi today it was revealed (drum roll) that Russian Armed Forces are financed fully and, in fact, the tempo of modernization only increased.

Meeting in Sochi (in Russian--Ria.RU)

c) So, all those "analysts" who are going apoplectic at their, yet another, failure to predict anything (it will happen to you once you begin to trust Russian "liberal" sources and US NGOs in Russia), understand what is going on as much as I understand the rules of blernsball from Futurama.

Obviously, not all of those US "Russia specialists" are dumb as f.cks (most are, however), Roger McDermot of US Army Staff College certainly recognized (within the wrong framework, though) what was going on long before T-14 rolled out to the Red Square.

So, basically, Russia rolled out a completely NCW capable armored force and with it, Russia defined the future of the warfare as based in the combined arms operations by large formations. Remember COIN? Big continental powers are not defined by COIN capability, they are defined by the ability to sustain standing armies capable of large scale operations. Russia simply reclaimed its status, she also presented the best weapons available for the job of being independent and militarily mighty nations which will not take sh.t from anyone, including US and NATO. The hysteria in the West (and especially in US) ensued. Ah yes...T-14 and Armata-platform vehicles look...gorgeous and sexy.

d) If the decision to resume production of TU-160s turns out to be a practical decision, and there are no reasons to believe otherwise so far, considering Russia's arsenal of cruise missiles this could be a very bad news for proponents of Prompt Global Strike since Kh-101 missile is a true stand off weapon which could be launched way beyond the reach of US interceptors.

2. But it was the Immortal Regiment march of 12 million all over Russia (500 000 in Moscow alone) which did what no military technology is capable of. On May 9, all over Russia, spirits of Borodino and Stalingrad, Kursk and Battle of Moscow were present. Because, as Tolstoy stated in the greatest prose ever written:

"But all the general and soldiers of [Napoleon’s] army…experienced a similar feeling of terror before an enemy who, after losing half his men, stood as threateningly at the end as at the beginning of the battle. The moral force of the attacking French army was exhausted. Not that sort of victory which is defined by the capture of pieces of material fastened to sticks, called standards, and of the ground on which the troops had stood and were standing, but a moral victory that convinces the enemy of the moral superiority of his opponent and of his own impotence was gained by the Russians at Borodino…The direct consequence of the battle of Borodino was Napoleon’s senseless flight from Moscow… and the downfall of Napoleonic France, on which at Borodino for the first time the hand of an opponent of stronger spirit had been laid"(c)

Russia finally found its spiritual pivot, and the totality of an immense Russian culture and history finally fused together in the midst of those millions of people who carried photos of their relatives who defeated Naziism. That, the historic memory of people, the immense shared historic experience, can not be erased and it will not be erased. That is the victory which the whole world, some with joy, others spewing bile, observed on May 9. And that was way more important than any parade or an advanced military technology, which are the derivatives of the national spirit, which finally found the way out. 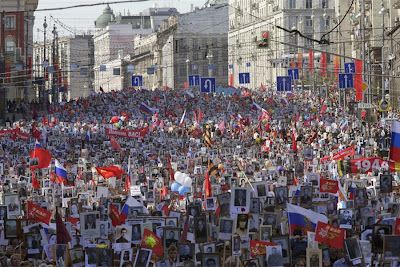 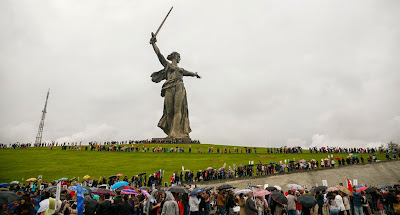 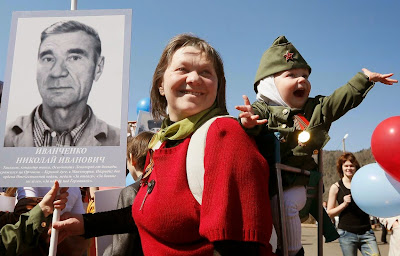 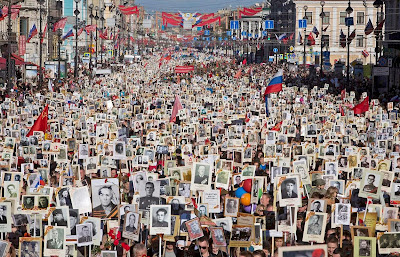