May 9th is approaching--it is a solemn day, it is also a day which honest, decent people around the world will remember forever. The day, when humanity's historic singularity ended. It ended in the ultimate destruction of Europe, especially its Eastern part, it also saw a horror of warfare in Asia. But it was the carnage of the Eastern Front which defies imagination. In the moment of rare clarity, Washington Post, today, published a piece which could have been a title of this post:

Festivities in Moscow are coming and, of course, there will be Red Square military parade. The praises to Allies will also sound from the Presidential podium. This celebration, however, will be without Western Allies' stately presence. They are "offended" and "insulted", well it is their loss. In the end, the ultimate destruction of Wehrmacht, in battles without parallels in human history, happened on the Eastern Front. The meaning of that destruction was not what one of the Obama's "femme fatales", UN Ambassador   Samantha Power dared to cynically promote in her abhorring UN General Assembly speech, by quoting Tanya Savicheva's diary. The destruction of Nazi military machine was NOT about some "principles" Power implied. It was for survival of humanity and sanity, and the scale of this sacrifice by all those 27 million Soviet people will remain incomprehensible for her, no matter number of worthless Ivy League degrees in humanities she, or people who lit the current world on fire, accumulate and whom she so passionately serves by lying, will ever understand.

But it is Victory Day in Russia and my intentions are simple: I praise the heroism and sacrifice of tens of millions Soviet people who demolished Nazism, I also praise and bow in gratitude to Western Allies, who did their duty heroically--we, Russians, always remembered. I will raise the toast today, also, for my three (yes, my grandma remarried) grandfathers-all three fought, one survived. The only one grandfather I knew and still love deeply. For every Russian it is always personal. So, with the Victory Day! 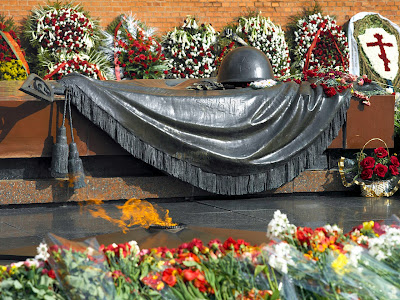