Which needs some elaboration. Because it explains one of the major factors behind geopolitical realignment taking place since the United States and EU unleashed a bloody mayhem in Ukraine. I warned already then that Russians are wrong people to fvck with. Well, here we are today with the US accelerating towards economic abyss while simultaneously destroying everything it prided itself on for couple of centuries, namely the rule of law, freedom of speech and whatever is understood under "democracy" in the US.  But behind all this massive geopolitical shift the "fundamentals" which define nations' real power one thing seems to be often forgotten and not brought up in the discussion often enough. Here is demonstration: this is 2017 statistics: 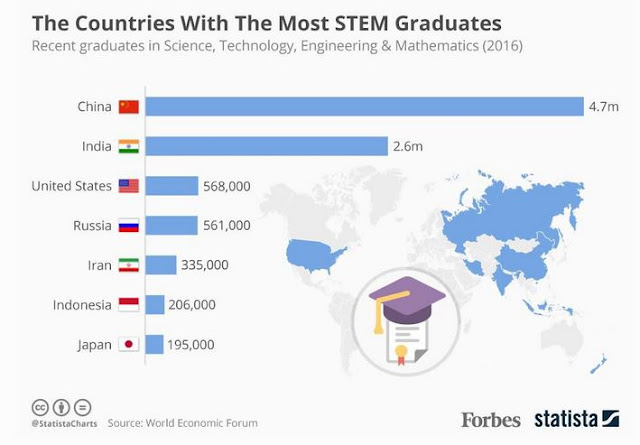 Here are some top countries with higher number of graduates as Russian Federation takes the top slot with 454,436 of annual engineering, manufacturing, and construction graduates, followed by the United States with 237,826. Meanwhile, those engineering graduates from Iran number 233,695 annually.

China is not included in this count, neither is India, but this is not what matters here. What matters here is quality. Not only Russia produces, in absolute terms, twice as many engineers than the United States, but even if one considers that the United States has an access virtually for free to already educated engineering cadres from elsewhere, primarily India and China, through immigration programs, I can easily point out a number of Russia's engineering schools whose graduates will never move to the United States, thus providing the US with a top shelf engineering expertise. And I am not talking about programmers; in this field Russia does provide the US with an absolute top-notch software engineering talent.

It goes without saying that the United States will never have access to the most graduates of industrial and weapons engineering schools such as Bauman MGTU. Especially those who went through classified courses, nor will Russian military academies, which are top engineering schools in their own right, provide any inflow to US engineering cadres. Don't count me, I am an old fart who completely forgot everything I ever knew (secrets wise), plus I have no ambitions to pursue specifically engineering career. And then, of course, comes this economic thingy which for many top notch Russian engineers stopped being a crucial factor in making their decision on where to employ themselves--top talent feels itself money-wise very well in Russia. As people who know, and are such talent, testify--Russia pretty much matches most of "economic" desires for such talents. No, really. Exchange Moscow, St. Petersburg or Novosibirsk for NYC or "silicon valley"? Really? Russians have an easy access to the internet, travel a lot and know about real state of the affairs in the US. The city on the hill doesn't shine anymore.

Some, of course, still fall for the gimmick of American rivers of milk and honey, but increasingly even those begin to reconsider. Mind you, I am talking about STEM talent. The United States is free to remove from Russia most political "scientists", lawyers, journos, business "analysts" etc. Truth is, the demand for those basically evaporated in Russia, with the exception of good accountants--this profession will always be in demand. But, having said all that, one begins to understand how the country "with the economy the size of Texas"(c) continues to produce some mind-boggling technologies both in military and civilian fields. Very simple--by nurturing national STEM intellect, which is in the foundation of national security and survival. It is also in the foundation of making things. You know, cars, aircraft, buildings, railroads, medicine, submarines, computers and other things which are of low interest for Wall Street or Forbes' "analysts" who obviously never attended any school which gives a good handle on STEM.

Please, don't misconstrue me as bragging. I am not bragging, I just state cold hard facts which are going into my third book which looks at issues of geoeconomics and how American "elites", most of who have no serious applicable productive skills, betrayed own people and doing so de facto demolished US standing in the world, granted many applaud such a development. Recall Lenin's sacramental from his "Can the Bolsheviks Retain State Power"

We are not utopians. We know that an unskilled labourer or a cook cannot immediately get on with the job of state administration. In this we agree with the Cadets, with Breshkovskaya, and with Tsereteli. We differ, however, from these citizens in that we demand an immediate break with the prejudiced view that only the rich, or officials chosen from rich families, are capable of administering the state, of performing the ordinary, everyday work of administration. We demand that training in the work of state administration be conducted by class-conscious workers and soldiers and that this training be begun at once, i.e., that a beginning be made at once in training all the working people, all the poor, for this work.

Boy, how many in the West even today are able to grasp the fact that apart from own internal, and deadly, rot, modern degenerate West is being outplayed, outproduced, outgunned and outsmarted by the heirs of those very unskilled laborers and cooks (have anybody read Putin's biography, wink, wink) who instead of going to political "science" or journo school went into... well, you know. But I am sure American know-how in producing "elite" will be in a huge demand in the third world which is so desperate for oversupply of philosophers, political analysts, stock brokers, journalists, creative writers and Queer and ethnic studies majors. Meritocracy is so overrated...especially in the 21st century where iPhones grow on trees and Hollywood "stars" influence public opinion.
Posted by smoothiex12 at 7:47 PM