Meanwhile In The News.

I keep an eye on that constantly.

CAPE TOWN (Reuters) - A draft motion likely to be passed by South African lawmakers would give a new parliamentary committee until March 2020 to report back on proposed constitutional changes that would allow expropriation of land without compensation.The ruling African National Congress (ANC) has pledged to accelerate land reform, an emotive issue in South Africa and a source of frustration for many voters. Twenty-five years after the end of apartheid, when millions among the black majority were dispossessed of their land by the white minority, housing conditions and land ownership remain vastly unequal.Last year, the ANC proposed a controversial constitutional amendment that would allow the government to seize land without compensation, but the process has stalled.

Of course, keep in mind that narrative (by Reuters, no less) about "dispossession" is good ol' British liberal BS, but that is expected from the media of the country, which is an exhibit A of a catastrophe that multiculturalism (euphemism for emasculation and disenfranchising of native white population) brings. Yet, the problem persists in South Africa and the white genocide is in the air.

Here is the video of how Boers are being welcomed in Russia (it is mostly in Russian) and given tours of mostly abandoned or barely alive villages, no, not in fertile Stavropol or Krasnodar Regions or paradise of Crimea, but in truly historic and geographic center of Russia--Ivanovo Region (my late father was from one of those villages--not shown in this video). The Administration of Ivanovo Region helped with presentation for this particular family, where all charming (all ginger) kids learned to speak Russian on their own.

There is a lot of land in Russia which needs loving care, especially in such areas as Central Russia (Central Strip of Russia). Will Boers take this offer too? Will rich Boers help their less fortunate brothers and sisters move too? They are the most vulnerable ones. South Africa is going to descend into chaos one way or another (actually it is happening as I type this) and the danger to whites there will only grow. Latest news only confirm that.

Back to the US. James Kunstler today pointed out what I also wrote about not for once, whenever commenting on current US "elites", including in relation to a disgusting spectacle of Russiagate, which culminated two days ago in Muller's performance which was painful to watch and listen. But here is Kunstler verbatim:

In all this long and excruciating public playing-out of dark schemes, Mr. Trump, first candidate and now president, seems to have acted as little more than a tackling dummy for the Mueller Team and its backstage Clinton confederates. He tweeted childishly about the deeply partisan composition of the Mueller Team when he should have mounted a forceful legal opposition to the effrontery of their selection in the first place.

It resonates well with yesterday Tucker's rant. Is it all that bad, really, among these American "elites"? Yes, it is and it is terrifying. The incompetence level is simply off the scale, as well as a complete paralysis of the government. A bunch of high-school spoiled brats, like in this photo with doctored Seal of the President of the United States. Pathetic and yet another sign of immaturity and lack of any values and respect to the Office among those who contributed mightily to the downfall of the Republic. American "elites" are revolting. They are unfit to run the country.

President Trump walked, beaming, onto the stage at Turning Point USA’s student summit in Washington, D.C., on Tuesday to loud applause from the attendees, as a huge image of the “Seal of the President of the United States” was projected on a screen behind him. But there was something different about this seal. The national symbol was replaced by a two-headed eagle, and instead of arrows, in its claw was a clutch of golf clubs. The national motto — “E pluribus unum,” meaning “out of many, one” — was replaced by the Spanish phrase “45 es un títere”: “45 [designating Trump, as the 45th president] is a puppet.” 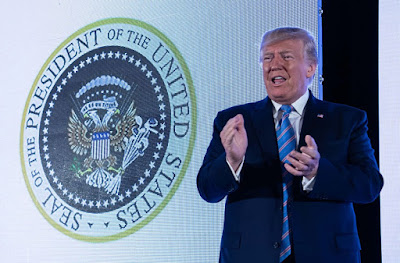