But If my Alzheimer doesn't fail me there were more than 50 rounds of US sanctions on Russia since 2014.  Now Bloomberg reports that those new "crushing" sanctions on Russia due to her completely owning US "democracy" and being able to manipulate with everything in US from garbage disposal to elections and POTUS, are being tweaked:

The leading effort in Congress to deter Russia from meddling in the U.S. midterm elections is likely to be rewritten to minimize unintended effects on global economies from stiff automatic sanctions on sovereign debt and energy.
“We want to make sure that the economic harm is confined as much as possible to the Russian economy and the spillover effects are limited,” said Senator Chris Van Hollen, a Maryland Democrat.

Yes, yes--it is all about "minimizing" things. Russia, of course, trembles in anticipation of those sanctions... Ah, wait. Not really. Actually, Russians laugh at them and write some really hilarious scientific economic-chemical articles such as (in Russian) at Ria.Ru:

It is a hilarious piece which has to be read in Russian to appreciate its laid back screw you attitude but enough to say that imaginary chemical element Boltium there is a derivative of Russian Bolt which is, well, bolt and which is a euphemism for, well, a huge cock. Thus Russian expression to put (polozhit') bolt on something which is a description of the state of not giving a damn about something. The article gives a review of an American chemical element Sanctium chemically interacting with Russian Boltium and reactions thus produced. Anyhow, Google Translate may help.  Russians will appreciate also the atomic weight of Sanctium which is 100,500. 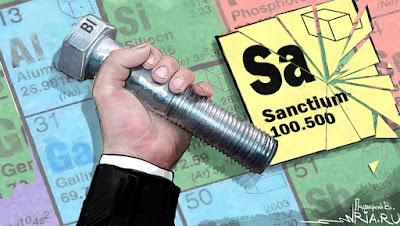