So, Kalashnikov Developed Yet Another Gun.

It is called AK-308 (in Russian), and we all may expect yet another round of all kinds of professionals, from combat veterans to Law Enforcement Officers, and, of course, armies of utterly unprofessional internet warriors getting ready to virtually kill each-other trying to prove that they know best what is needed in actual combat. It is, meanwhile, a very nice looking weapon:

I will give a hint: even being an officer, during some certain events in Azerbaijan many of us still preferred to have, apart from standard issue PM, AK-74 with us when being deployed to some localities which required armed attention. AK-74 is my favorite of them all, despite me having an intimate knowledge of all of them in 1970s-80s from AK-47, AKMs and other versions of this venerable Russian "assault" rifle (whatever that means, but I am being PC here). I don't know how this new weapon feels but it looks cool.
Now to unexpected turn of events. Remember this mecha-robotic son of a bitch? 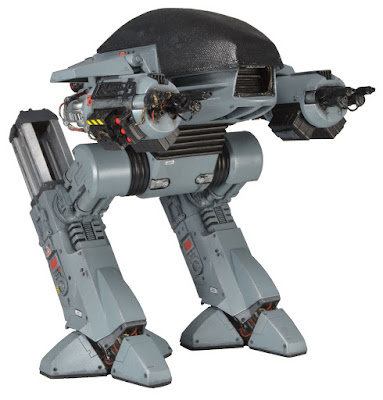 Well, Russians for some reason decided to present this new Kalashnikov 308, together with a huge array of a military hardware at the Forum "Armia-2018" (Army-2018) about to open its doors in Moscow,  by means of a lovely 4.5 ton contraption which looks like a bastard from the unholy coitus between this Paul Verhoeven's classic walking nightmare from Robocop and robots from late 1950s Hollywood B-rated sci-fi flicks or, maybe, a group robotic sex with some decent caliber net-centric capable machines squeezing primitive blue locals from Unobtanium fields in James Cameron's Avatar. So, here is this thingy. 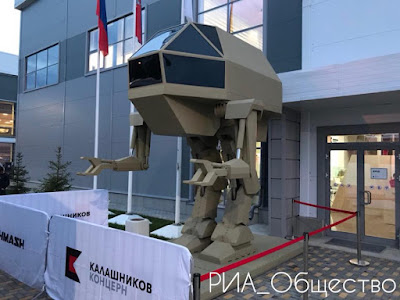 Well, Russians love robots. Who doesn't? There is no better way to go than being shredded into a bloody pulp by robots' automatic guns or, for that matter, have 4.5 tons stepping on one's balls, a range of excruciating departures from this world which would satisfy even Lieutenant Frank Drebin's exquisite tastes in death.

But jokes aside. This is the robot, or some versions of it, which may at some point of time pop up somewhere as a real combat bot and Russia, sure as hell, was working on this topic for quite some time. You maybe surprised with the array of high tech killing machines Concern Kalashnikov produces today. Yes, not just famous rifles. Somebody warned about not being overtaken by all this Revolution in Military Affairs (RMA) fad in mid-1990s--it was legitimate and sensible call then. Today? Time to think hard about RMA as a real deal because we are into the reality of weapon systems with elements of AI and who knows, we may yet, at some point of time face the necessity to slay the Skynet in order for all of us to survive. But I am getting ahead of myself here.