As I stated not for once in the last several years--Russia is not interested in challenging US maritime dominance. There is simply no need to do that:

As famous Russian anecdote goes: no matter how many times Russians will assemble crib (or sowing machine in some versions), the result will always be the same--AK-74. Same with the Russian Navy, which can only exist as a Sea Denial force. As Russian Navy's Commander-In-Chief Admiral Korolev stated yesterday--non-nuclear strategic containment (deterrence) becomes Russian Navy's primary task and State Armament Program 2018-2027 reflects this in full. I already can hear sobbing and weeping of Russia's "navalists", especially those who never served a day on any naval ship and study military history from weapon systems' booklets handed out at arms exhibitions, or from (wrong) books, but Russia in this case acts precisely as she should.

It is understandable that building aircraft carriers, and I mean Russian version of CVNski, in their opinion, is the only way to go since, again--in their opinion, this is the only way to have an "ocean-going fleet". This whole Russian "ocean-going fleet" fetish, which implies that Russia doesn't have one, on their part is a good sign of their lack of education on serious operational matters. Indeed, how can the Navy which has advanced nuclear submarine (both SSGNs and SSBNs) component which deploys regularly to the.... ocean be considered non-ocean-going fleet is beyond my feeble mind, but what do I really know.

1. Even today Russia's Navy is an "ocean-going" fleet is one considers a very simple fact that it goes there in a manner which perfectly suits current Russian naval necessities. Indeed, can Russian Navy send ships to the ocean? Of course it can. Such as many deployments of Russian ships recently to this very "ocean". Such as this one. I will abstain here from speculating on how many Russian subs are currently on combat patrol in Arctic, Atlantic and Pacific oceans but this IS what is called an "ocean-going".  Russia does have number of those subs on patrol as I type this.

2. Korolev, however, does mention building of a Green Water Navy, which, by definition Russian Navy already is. Of course, the "thing" in this world of military lingo and generalizations is a Blue Water navy. That is the navy which can do, among other things, a global "projection of power". The question in this case is this: does Russia need such a global "power projection"? Answering this question competently is a must if one wants to remain well-grounded in operational reality. The answer is not as simple as it may seem. It must be nuanced. Regional? Certainly, such as a Mediterranean, as events in Syria have shown, but globally? Does Russia need "power projection" against Kongo? New Zealand? Absolutely not.

3. Yet, as Paul Atreidis's strategic dictum goes: "one who can kill a thing, controls a thing"(c). Russia builds the Navy capable to kill any navy in the world. This is Containment 101. This task is on several orders of magnitude more important for Russia than any "power projection" capabilities, which come a very distant second in the current global transformation the world is going through. The only difference in this unfolding reality is HOW FAR from Russia's shores will Russian Navy be able to destroy aggressor's navy?

As it stands now and as it projects itself to 2020-2022 Russian Navy's capability, augmented by other forces' capabilities, a reliable Exclusion Zone, or No-Go zone, will extend (very roughly, of course) up to 3000 kilometers (1620 nautical miles) from Russia's shores. It will be at this distance at which operations of heterogeneous forces (submarines, surface ships, patrol and missile-carrying aviation with its fighter escorts) will be able to deliver a salvo of missiles which will destroy any naval force deploying for attack on Russia. All this will be done in purely conventional (non-nuclear) framework. I described those A2/AD "bubbles" not for once. Those bubbles are not getting weaker or shrink, to the contrary--they are getting stronger and expand. While Admiral Richardson's statement:

Russian Bastion-P supersonic anti-ship missile systems are not impenetrable... Nor do formidable Russian... air defense systems such as the S-400... necessarily render the airspace they protect into no-go zones for the carrier air wing.

May be somewhat true, under some very rare specific circumstances, introduction of hyper-sonic missiles renders the whole concept of a classic US Navy's CVN and its battle group completely obsolete. In essence a classic dichotomy of Shield vs Sword is not valid anymore. Modern hyper-sonic weapons will penetrate any air and missile defense of any modern navy and they will sink or kill a mission with very high probability. Those salvos will be launched from the underwater, ground and air and they will get through. This is a new paradigm in the naval warfare and it overturns completely any geopolitical designs American neocons had on Eurasia. This is a tectonic shift of historic proportions, but about this--later. 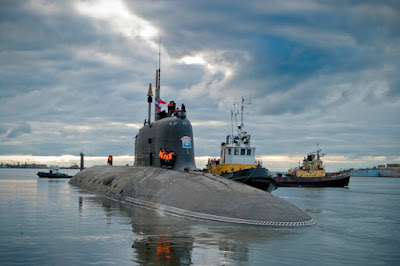