So, it is not just Russians anymore, eh? First, let's face the fact--Olympic Movement is dead! No, it is worse than dead--it is utterly corrupt and is long ago a national vanity fair where anything, including political pressure goes. Doping is one of such tools which allows for a classic double standard. Last time these were Russians, including absolutely clean Russian Paralympians, who were bundled up with those in Russia's National Winter Olympic team who, no doubt, took performance enhancement drugs. What was done in Rio to Russian Paralympians has no name--it is atrocity, those who perpetrated it know who they are, they have no honor, nor any other redeeming human qualities. But we knew it was a classic geopolitical gambit--and Russia's recent "outing" as a prime doping evil-doers was nothing more than just another step in a pressure applied to Russia and Russians since the return of Crimea back home. Of course, as we all know only Russians do doping, everybody else are totally clean and honest... wait, BBC is on line? Ah!

The hell you say, Grisha. Say it ain't so. Doping, in the West, oh come on--who would ever believe that?

"If there is specific intelligence relating to British athletes, then we would welcome that information being passed on in full to us." The British Olympic Association (BOA) declined to comment.

Indeed, why comment on anything that anyone with a half-brain knows for a fact. But as they said in Frank Herbert's Dune: "The forms must be obeyed." So, it may take a while before they will be obeyed and all media and political games played out and maybe someone will be "caught". Maybe not until the age of Padishah Emperors unfolds. Meanwhile, I think this whole Olympic business should go out of... business, plus Soccer World Cups are on the order of magnitude more important sports events and more legitimate expression of a national pride, or, in case of Russian team--national shame, than some doped bunch trying to improve yet another one hundred thousandth millisecond over some record established 20 years ago. Most of those Olympic winter sports events, bar figure skating and, maybe, biathlon (hockey is a completely different thing altogether), are as exciting as curling (sorry, Canada). 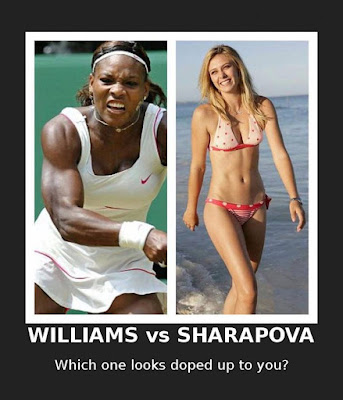