As I wrote recently:

It is the Northern Sea Route, which China supports enthusiastically. She has sound reasons for doing that. Unlike the Indian Ocean where PLAN would have to face the immensely powerful US Navy, Russia controls the Arctic and possesses a world-class A2/AD capability there,

U.S., Russia propose Bering Strait ship traffic routing measures
WASHINGTON -- In response to increased Arctic shipping traffic, the United States and Russian Federation have proposed a system of two-way routes for vessels to follow in the Bering Strait and Bering Sea.
The nations jointly developed and submitted the proposal to the International Maritime Organization (IMO) to establish six two-way routes and six precautionary areas.
Located in U.S. and Russian Federation territorial waters off the coasts of Alaska and the Chukotskiy Peninsula, the routes are being recommended to help ships avoid the numerous shoals, reefs and islands outside the routes and to reduce the potential for marine casualties and environmental disasters.
The proposed two-way routes will be voluntary for all domestic and international ships.
No additional Aids to Navigation (ATON) are being proposed to mark the recommended two-way routes and the routing measures do not limit commercial fishing or subsistence activities.
“Over the past decade, the U.S. and Russia have both observed a steady increase in Arctic shipping activity,” said Mike Sollosi, the chief of the U.S. Coast Guard Navigation Standards Division.
Increased commercial and recreational traffic bring the increased risk of maritime casualties, said Sollosi, and the bilateral proposal for routing measures is designed to reduce that risk.
“The U.S. Coast Guard is engaging international and interagency partners across borders in developing joint proposals for ship routes in waterways that we share,” said Sollosi.

The  Chart below shows proposed routes through what amounts to US-Russian maritime border (plus Sarah Palin's Observation Deck, wink, wink) and what in the nearest future should become a very busy "highway". 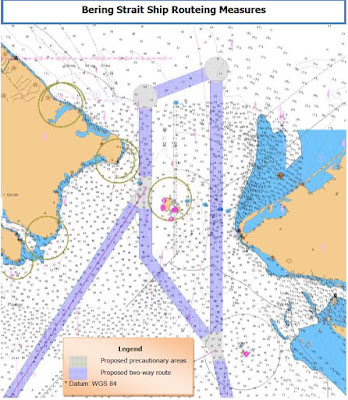 There are, inevitably, some extremely serious strategic ramifications in what, in my view, will be China's initial attempt in avoiding a meeting with powerful US Navy in more southerly altitudes. Plus, of course, already today there is a gigantic joint Russian-Chinese-European Liquid Natural Gas facility in the port of Sabetta.

Well, well, well, friends. The moment I finished this post yesterday and 9 days after finishing my UNZ article, look what made the news today.

Today China, the Press-Secretariat of State Council of PRC, issued a White Book on NSR and Arctic in general singled out as one of the most important venues in China’s shipping of its goods (90% of them are shipped by sea) and in obtaining mineral resources. In Russian (Google Translate will do). The phrase which merits a very special attention is this statement by Ivan Andrievsky, the First Vice-Premier of Russia's Union of Engineers.


China is obviously following her own interests and tries to save on shipping, that is why the volume shipped through Northern Sea Route (NSR) is growing. Some people see the threat in such expansion. Theoretically conflicts are possible in the future with significant melting of ice and the growth of China's military ambitions. But at this moment such threats are exaggerated.

Now, my friends, get this--can you imagine what could have been if there were smart, nay, simply sane people in Washington? Interesting, isn't it? Man, talk about timing of my piece in UNZ, right?