I. As I stated before, we all have to face the reality of living in a meme-driven world.  Today, Steve Sailer nailed it with a nuclear power hilarity and precision. Here is his brilliant post at UNZ. 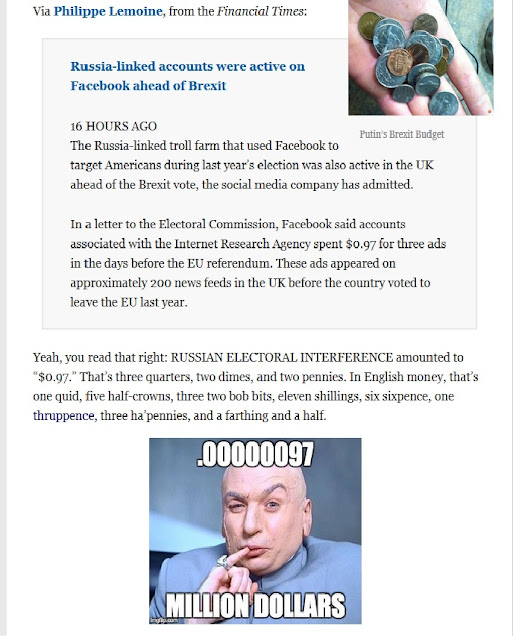 So, Russia influenced Brexit by financing it by a massive amount of 97 cents. This is now the operational "level" of the famed MI-6 (and CIA)--dealing with about one dollar of Russian interference. James Bond (I mean Ian Flemming) would be proud, LOL.  I never knew that Dr. Evil, I mean Vladimir Putin, was such a cheapskate... But then again, can you imagine what Russia can do with....

The scale of this farce is such and it unfolds with such speed that one really begins to worry about very real mental health of a whole strata of the society both in UK and in the US.

II. On a more serious note: Gorbachev was not lying when stated that he was given a truck load of assurances in late 1980s-early 1990s that NATO will not expand. As declassified documents from National Security Archive testify:

People in Caucasus have a wonderful saying about BSers, it goes like this: He is a master of his word--he can give it, he can take it back. Here is a case in point. But we knew that all along, didn't we. How much is Western "word" worth? About the same as of a crack whore telling a client that she loves him.
Posted by smoothiex12 at 9:19 AM