It is a new day in USA! A badly needed and a long, very long expected day. Will American and world's problems disappear with Donald Trump's inauguration? No way! But for the first time in three consecutive US Administrations (in reality even longer), the United States has a President who gets it and speaks to people directly. Trump's inauguration speech (I am at work and had to listen to it in parts) and now reading a transcript was incredible, his vision is solid and good, some of his statements probably gave aneurysms to the whole generation of political whores in Congress, on both sides of an isle, and D.C. bureaucracy. No, the wars will not stop immediately and badly needed manufacturing will not return to the US in a flick of the magic wand, but Trump's vision of the world and of the US, while not perfect, is a good place to start to saddle those powerful winds of change, which will sweep cancerous neo-liberalism into the dust bin of history.

I am a realist and I do not hope for too much. But we may finally exhale understanding that US and Russia, while not becoming friends in any meaningful way, may actually not get embroiled in a global conflict. That is already a huge tangible, the rest could be discussed and settled on something which may actually work. In my mind, the most important strategic, nay, metaphysical thing Trump stated was this:

"We've made other countries rich while the wealth, strength, and the confidence of our country has dissipated over the horizon. One by one the factories shuttered and left our shores without a thought for millions of millions of American workers left behind. The wealth of middle class Americans has been ripped from their homes and redistributed across the world. But that is the past but now we are only looking to the future...  We do not seek to impose our way of life on anyone, but rather to let it shine as an example for everyone to follow."

And that, my friends, is simple and pure truth. The words which resonated in me with Orwell's: In a Time of Universal Deceit — Telling the Truth Is a Revolutionary Act. That is what this President did on his way, along which he was spat on, humiliated, lied about, blackmailed and threatened, towards this day. I am not going to lie, I got a little bit emotional. I sincerely congratulate America of decent, hard working, honest people with the chance and a hope. I also congratulate 45th US President, Donald Trump, with doing it all against all odds. I think he will need these incredible skills in overcoming those odds soon enough. It is a new day in America, and in the world and I also congratulate myself with the excuse for opening the bottle of a bourbon and lighting a cigar--it is a good day. Ah, yes, peeking at this Inauguration and seeing Melania, the most gorgeous US First Lady, probably ever, (don't give me this Jackie shit) was a treat. Isn't that cool? Hell, yeah. 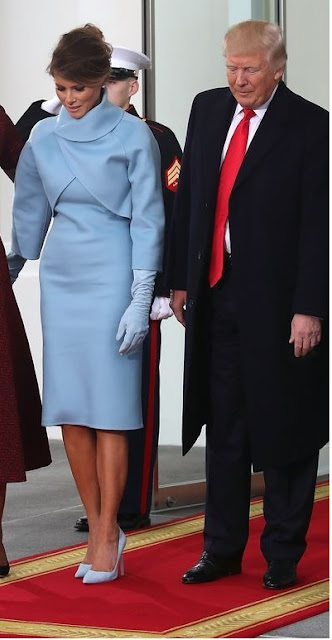 P.S. I can not wait when these no good Hollywood "celebrities" stick to their word and self-deport themselves from the United States, as they promised to do if Trump wins. Well, he won.
Posted by smoothiex12 at 11:57 AM