I am of a very low opinion of present American geopolitical intellectual faculties. Nah, I am being facetious,  it is not just geopolitical--it is most of it, which is nothing more than headless chicken run. The time of the titans is over (for now) in the US. But Robert Kaplan, who scribes for, I know, I know, The National Interest, has a special case as an Exhibit A of such an intellectual impotence. Especially once Kaplan decides to come up with a Grande' Idea worthy of the TNI tabloid, masquerading as a serious publication. Get this:

Why Russia Is the Problem From Hell: America must try to move Russia away from China and improve relations while maintaining deterrence.

He opens with a broadside and knocks me off my chair because, well I'll explain.

In 1812, his army exhausted and overwhelmed by the Russian steppe, and watching Muscovites desert and burn their city rather than see it handed to his troops, Napoleon was reported to exclaim in desperation about the Russians: “What men they are! They are Scythians!” The reference was to the nomadic horsemen of antiquity whom no one could conquer, reason with, or pressure in any way. Indeed, by the turn of the twentieth-century, the historian Henry Adams observed that the intractable Russia problem had always been the key to modern Europe and that, therefore, “The last and highest triumph of history would…be the bringing of Russia into the Atlantic combine.”

Writing about subjects one has no clue about is a defining trait of modern "scholarship", and not just an American one, let's be objective.  The reason I am still trying to recover from Kaplan's opening salvo is next. This is the map of Napoleonic invasion of Russia in 1812 up to an entrance to Moscow. 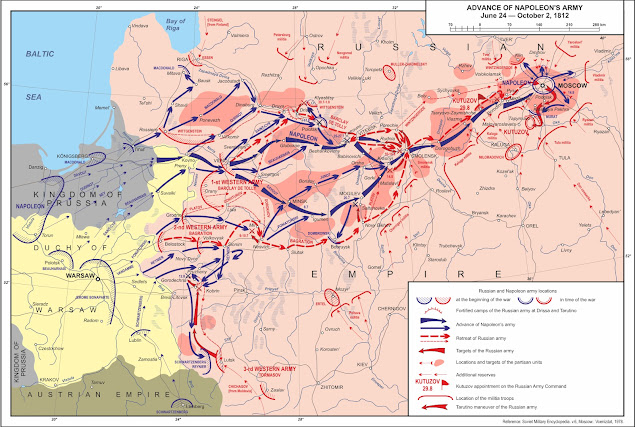 This is how Grande (not really that Grande) Army tried to escape Russia and was finished off: 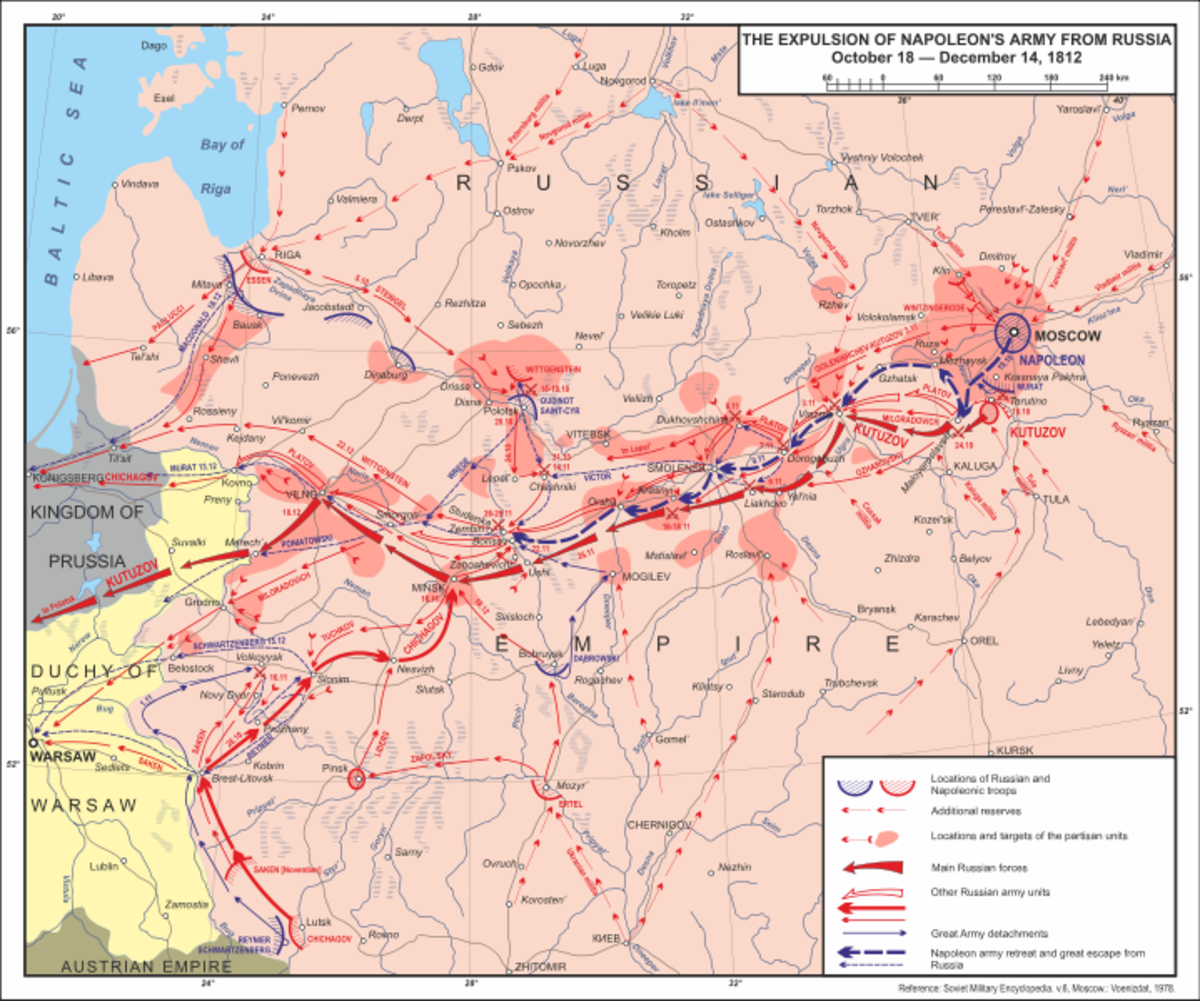 Here is the photo of modern day Smolensk. The Smolensk Kremlin, though, did exist many centuries before 1812. 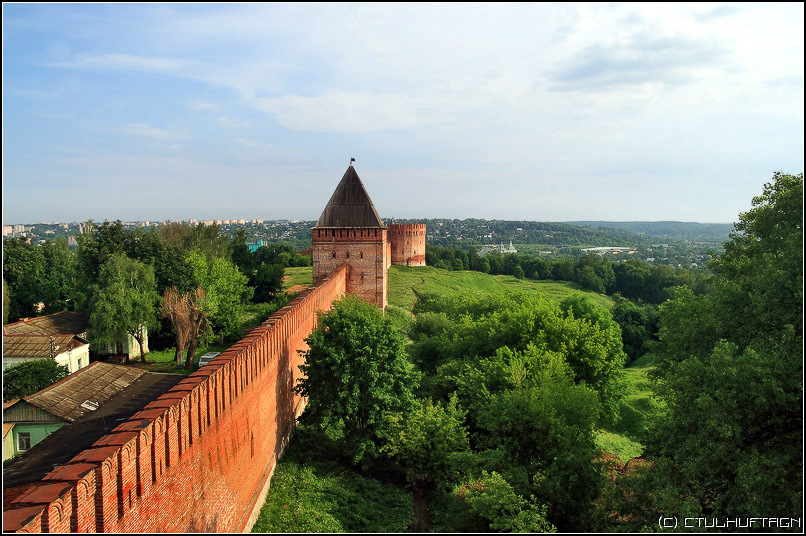 This city was straight in the way of Napoleon's Army and saw a brutal battle there in 1812. Next is the photo of Mogilev region in modern Belarus.

In general, Belarus, which Napoleon and his army had to cross to get to Smolensk and, inevitably, Moscow is famous for Belarussian partisans in WWII and the reason Belarus was hated by Wehrmacht and its allies was because it was very difficult to fight those partisans because Belarus is covered in forests, like everywhere. Massive forests. The whole area from Smolenks, to Vyazma to Moscow and around--it is drowning in those proverbial Russian forests, which, accidentally saw massive partisan activity both in 1812 and in WWII. Why am I concentrating on that? Simple: Napoleon and his Army couldn't have been exhausted and overwhelmed by the Russian steppe(c) because none existed where Napoleon's Army marched in and out of Russia, steppes still do not exist there. The steppes of Russia start way down to the South where no Napoleon soldier ever ventured, and even Russian steppes, such as around famous city of Kursk and the area of the largest tank battle in history, still have forests popping up here and there. This is Kotlevo village in Kursk region.

Some may say that I am picky. I totally reject this accusation, if one is made. Recall Mr. Blank and his idea to send US warship to show them Russkies to the....Azov Sea. But the moment we establish the fact that this geopolitical "scholar" (Kaplan) just made a new geographic discovery in Russia--such as steppes which allegedly exhausted and overwhelmed Napoleon in 1812--we are treated to the main course.

Russia has always proven to be a bridge too far for the designs of the modern West. And that is a point we unfortunately need to accept. To denounce Putin for his human rights abuses constitutes mere decency. But it won’t get us far in terms of confronting the eternal dilemma of Russia. For there is something undeniably Russian—straight out of Dostoevsky and Solzhenitsyn, in fact—in the way that Putin has treated dissident Alexei Navalny: banishing him to a notorious prison camp outside Moscow, where inmates do manual labor and are forced to stand silent for hours with their hands clasped behind their backs. Putin himself, meanwhile, is in good health and could be in power for years to come. And with longevity comes legitimacy in the amoral world of geopolitics.

I wonder what so "Russian" did Mr. Kaplan find in Solzhenitsyn other than mediocrity and lies--universal human traits, in any nationality. But then again, people who "studied" Russia from Solzhenitsyn, one would expect that type of concoctions. This is not to mention the fact that Russians also changed, rather dramatically, since the times of Dostoevsky who saw Russia as a very poor country (see his Pushkin Speech) and described idiosyncrasies many of which simply disappeared because times changed. Like really-really changed. Did Kaplan check his calendar recently. But never mind, he finally comes up with a grand plan, an incredible geopolitical insight into Russian psyche and government, and proposes:

The painful truth is that Putin has not only to be deterred and morally denounced, but engaged, since the chances of changing his regime in our own image is as likely as remaking Russia was in the 1990s, or of Napoleon or Hitler adding Russia to their empires.

Wow. Well, obviously trying to sell 1990s to the majority of Russians, especially by some American "scholar" is a very bad idea, the same as trying to promote creeps like Navalny as Russia's future, but then again, if Napoleon got exhausted by Russian steppes, I guess morally denouncing a President of a country where he enjoys overwhelming public support... ah, wait, I forgot--Putin is a killer, so yes, I guess then strongest moral denouncement is in order. After that, Kaplan, comes up with a classic contemporary geopolitical drudgery and parading his ignorance of Russian realities, which is a defining trait of modern American "Russia Studies" field. But his conclusion is a wowser.

What Nixon and Kissinger accomplished is now impossible. That was a time when Russia and China were practically at war and thus ripe for American manipulation. But a modest prying-apart over time of the Russia-China alliance might yet be possible. At least that is the direction where we should be headed. Merely holding Russia to account is not a policy. We should learn from Napoleon.

First, there is nothing to learn from Napoleon because at that time it took Russian more than a year to get to Paris. Nowadays, Russia can defeat the combined West without resorting to nuclear weapons in a matter of weeks. But the main issue is this: Mr. Kaplan--look in the mirror, while imagining that you represent modern United States and ask yourself a question of what do you see there? If you think that what you see there is worthy of attempts on a "modest prying apart" of Russia-China alliance, I have a bridge to sell you. No one in their mind will want to exchange brand new 2021 Japanese-made SUV for the 1978 Lincoln Town Car for practical reasons. No one in their own mind. But then again, evidently Kaplan still thinks that Nixon and Kissinger accomplished a lot. Sure, they started the US on the road to both financial ruin, with Nixon getting off the gold standard, and Kissinger... well. I rest my case.

So, the question is--how this pseudo-scholastic drivel is even published, let alone is considered an opinion worthy of consideration. Kaplan is not alone is publishing geopolitical BS, just yesterday another "expert" from The American Conservative publishes an absolute incoherent delirium. This is an intellectual disaster, a catastrophe of the American Russia "scholars" manufacturing an alternative reality, still thinking that Russia sleeps and dreams of how to become the part of the West. Forget "steppes" and other laughable mistakes public school sophomore wouldn't make after a couple of hours on the internet studying geography or history of Russia. Putin today signed the Order (Ukaz):

Translation: The Order on application of the measures of influence (counteracting) on unfriendly activity by foreign states (in Russian). Mr. Kaplan, guess from three times who those "unfriendly" foreign states are. Need a hint? Read the Order and check out what Order from 2018 (#127-F3) states.

These "scholars" still don't get it, that the West had its chance with Russia, it BLEW it. It did, however, blow it not only towards Russia, it also blew it in relation to itself. But history loves victors. Nobody loves losers, especially sore ones. Maybe it will occur to Kaplan while studying a physical geography of Russia.