In A Normal (Rational) World That Would Have Been...

Well.... fishy from the get go, not in the US where truth doesn't exists in and around Washington D.C. and around studios of the main propaganda outlets such as MSNBC, CBS, CNN--you know them all.

WASHINGTON (AP) — The White House said Thursday that the intelligence community does not have conclusive evidence that Russian intelligence operatives encouraged the Taliban to attack American troops in Afghanistan. The assessment, revealed Thursday as the U.S. announced a host of new sanctions on the Russian government, undermines one of the sharpest attacks Joe Biden and other Democrats leveled against former President Donald Trump during the 2020 White House race. Biden repeatedly attacked Trump on the campaign trail for not standing up to Russian President Vladimir Putin despite his administration being aware of intelligence suggesting Russian agents were offering bounties to the Taliban. But on Thursday, White House press secretary Jen Psaki said that after a review of those classified reports, the intelligence community determined it had only “low to moderate confidence” in their authenticity. She said that was due in part to the ways in which the intelligence was obtained, including from interrogations of Afghan detainees.

Ahhh, no. It is not "low to moderate confidence", those reports promoted by DNC and Biden are a complete bunk because:

1. If Russia would want to really do a bloodletting in Afghanistan, she has a number of tools to do so ranging from clandestine ops against US troops to a direct supply of said Taliban (which is officially designated a terrorist organization in Russia) or other groups with all kinds of toys which would increase US casualties there. After all, all kinds of groups are dealing in weapons in Afghanistan today, many of those weapons from old storage bases in former Soviet Middle Asia. So, you get my drift. In other words, if Russia would want to inflict the pain, the US would feel it. The main question is: what for? Anyone has any rational reasons for Russia to do so? I don't.

2. Russia is, in fact, interested in the US staying in Afghanistan not only for the reasons of, granted current disastrous Russian-American relations' background, parading US war in there as an Exhibit A of how not to prosecute the war, but also because Russia is sincerely interested in the United States tying for now, granted grossly inefficiently, any fundamentalist Islamic forces which otherwise would start their moves Northward from Afghanistan to former Soviet Middle Asian republics, now independent states. In this sense the US and Russia are unlikely allies, granted US propensity to support all kinds of terrorists.

Now even Biden's own "intelligence" community effectively says that the whole story had the same veracity as that of Iraq's WMD program or of the Michael Bay movies being documentaries. Psaki's statement like this, however, puts things in a funny light:

Psaki added that U.S. intelligence has evidence that Russian military intelligence, known as the GRU, interacts with individuals in Afghan criminal networks.

Ahh, what about the US being in cahoots with people who massacred almost 3,000 innocent Americans on 9/11? Just saying. 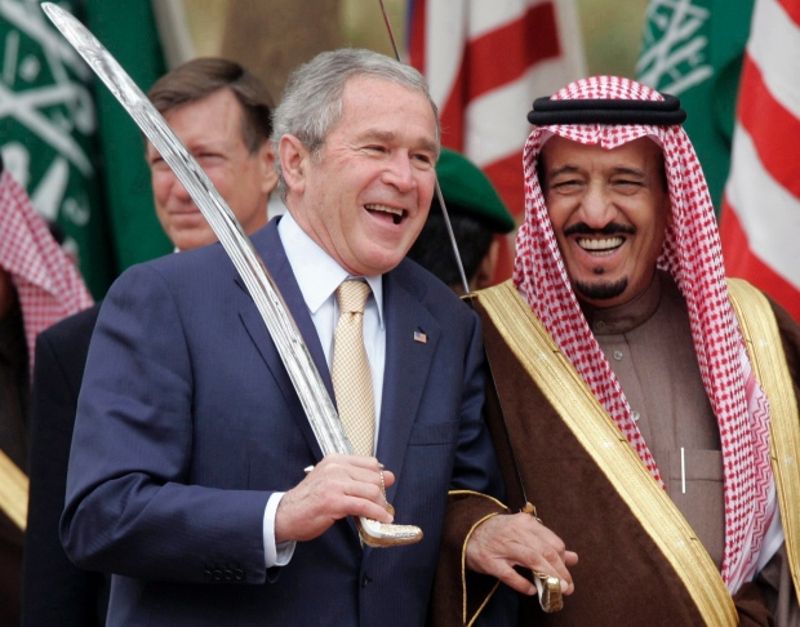 But, obviously, as US judiciary goes, it is Iran which committed 9/11, right?

Iran ordered to pay billions to relatives of 9/11 victims.

So, do you understand now why Vladimir Putin didn't accept Joe Biden's "invitation":

The Kremlin ... said the proposed summit “in a third country in the coming months” wouldn’t be possible to organize on such short notice, and declined to say whether Russia will accept Biden’s invitation to the virtual climate summit scheduled for next week.

Why even bother? To talk about what, we omit now obvious who? The US ran itself into the military-diplomatic clusterfuck completely on own volition when trying to play chicken around Ukraine with very wrong people, then recalled that Russia has rather competent armed forces, and suddenly it is all about saving face, America's. Well, Russia's diplomacy is much older than the United States as a country and Russians fought enemies much tougher than America. I think, Kremlin's decision to avoid talking to Biden or, rather, those who control him, is a solid decision and the ensuing tawdry political show in D.C. and Brussels is fun to observe. As for new sanctions imposed on Russia, as I referred to famous Russian rare-earth element called boltium few years ago, you all may refresh description of this really rare element of Periodic Table here, how Russian element boltium interacts with another element, known in the West--sanctionium (in Russian), wink, wink. This was three years ago, since then boltium, for some reason, increased its corrosive action on sanctionium and many still cannot understand why.

So, let Biden's Administration work hard on "deescalation and diplomatic process" with Russia. I am sure they are hard at work now and are desperately trying to count days before Russia finishes with her military exercise at her Western Border and will allow the US to claim a diplomatic success with "dissolving" the situation. Sure. Meanwhile, are there ANY competent people inside the Beltway left, not poisoned by a dangerous rare-earth element which exists only inside the Beltway--sanctimonium? Just wondering.