The Only Things That Matter. Just A Rant.

Just a rant--no structure, no concrete point, just some thoughts thrown at the fan. Ah, yes! Stock market is up, it is down, it is now up again. What a field for speculation--both pseudo-intellectual and financial. Yet, one has to look at "fundamentals": you know, the actual debt and manufacturing to get the feel. Here is the problem:

Dec 2 (Reuters) - Wall Street fell on Monday after President Donald Trump said he would restore tariffs on metal imports from Brazil and Argentina, while weak domestic manufacturing data fanned worries of a slowing economy in the wake of the U.S.-China trade war. The U.S. economy's manufacturing sector contracted for a fourth straight month in November, as new order volumes slid back to around their lowest level since 2012. Construction spending also unexpectedly fell in October.

I like the word highlighted in yellow. Unexpectedly? Really? Another "analysts":

Blah-blah, blah-blah, blah-blah. Yada yada yada. Pardon my French: unexpected my ass. Me getting pregnant--that's unexpected, me winning Lottery--that is entirely unexpected, me becoming the CEO of Chrysler--talk about a complete shocking surprise. US economy realistically not growing--yeah, let's call it that, not growing--is completely expected for anyone who doesn't spend their days at Wall Street or in a front of computer playing  games or browsing porn. Indeed, what is "momentum" for manufacturing? No, really, how can one apply this momentum thing from Physics, which is Mass times Velocity, to a manufacturing sector? OK, I get it--production growth over time, right? Or, following "economic" definition of a momentum as:

Momentum is the rate of acceleration of a security's price or volume – that is, the speed at which the price is changing. Simply put, it refers to the rate of change on price movements for a particular asset and is usually defined as a rate. In technical analysis, momentum is considered an oscillator and is used to help identify trends.

But give those big time economic "analysts" a break, as is stated even in WiKi:

The existence of momentum is a market anomaly, which finance theory struggles to explain.

So, if the whole theory struggles to explain it, what do you expect from us, mere mortals, trying to conceptualize something which is beyond the  grasp of those financial "theorists". Anyone with even basic university level math can create a shitload of different ratios and indexes which will add to an already fully confusing and failing to predict anything "theory" which fails to see an economy as a consumer matrix in different cultures, together with the fact that at this point of time it is impossible to create any reasonable demand on a plateau of a consumer economy whose only growth today in the United States and, in general, combined West, can be achieved only by producing sex robots, blowing smoke up the ignorant asses of progressive public selling them Tesla and other so called "hi tech", and by creating an artificial demand for useless services and consumer gizmos which only dumb general public down. Period. We are at the end of financial capitalism which cannot create real wealth anymore. OK, one can built couple of skyscrapers here and there, but what else? Ah, the horrifying words of wealth distribution begin to sound. How can one create a real wealth, a real capital which is measured not in funny electronic records called "money" or in increasingly useless apps for already totally stupefied by their cell phones and social networks syphilis youth? Hm, a billion dollar question.

And then, there is an issue of energy. How can you do anything without energy? No, not the so called "green" energy or the chimera of a renewable sources--this type of "energy" is a technological and a financial train wreck and by now, together with anthropogenic climate change, is not even a viable science and technology but an ideological hammer used for herding current and future dopamine dependent generations of ignoramuses into the concentration consumer pastures where their remaining humanity will be excreted same way as fiber and soylent green rich diet. It doesn't look good for them if present model persists. It increasingly looks like that those generations will get very good options in terms of places they can waste their increasingly virtual lives away, such as social networks with bigger and better exhibitionism factor, of course, in strictly defined politically correct barb wired limits. What those generations will not have, are good options for healthcare, education and employment, which also means families. To get that, those generations will need a lot, and I mean a lot, of energy and of this energy's correct and effective distribution. Here is how energy consumption changed in the last 200 years or so: 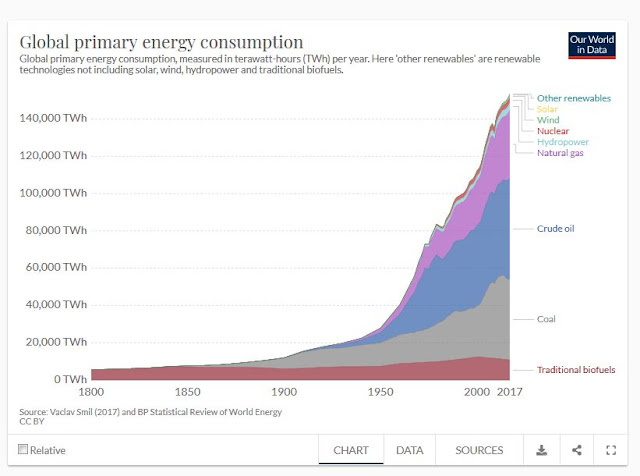 Now take a look at the regional spread, so to speak: 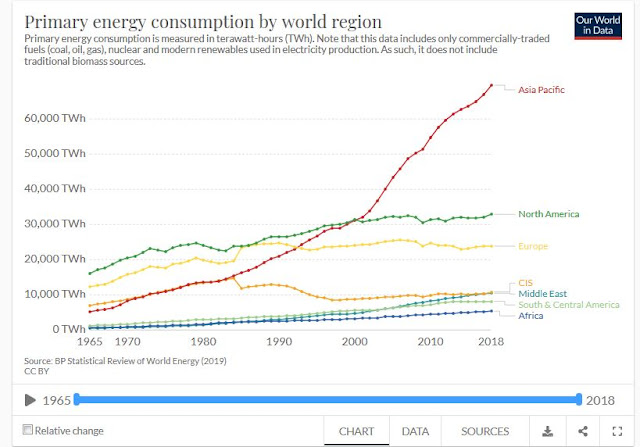 That speaks volumes, doesn't it? And the trend is easy to establish. You see the relation here? No actual wealth-creation, no real energy consumption. Real wealth creation--growth of energy consumption.  Sure, Asia-Pacific has some catching up to do in terms of its infrastructure, but it is clear where the REAL wealth is being created and where it stopped to be created. I, of course, am not talking about operations on the stock market, they do consume some energy, which goes into operation of the computers and software designed for speculation and blowing bubbles, but other than that, this is as much as it goes into the wealth creation. I am sure the energy required to build or repair one major bridge or to produce a single commercial aircraft by far exceeds energy required for a stock buyback which leads to increased "capitalization" of some company. Like a real estate market--one day your house is worth $200,000, next year it is already $260,000. You see--no effort at all and $60,000 has been created out of pure air. But that is what this graph demonstrates--real economic growth requires energy, when there is no growth, there is no energy consumption increase, even when one considers real energy-saving technologies, of which yours truly is an enthusiastic supporter.

Everything we do in our lives requires energy. Creating things is the most energy-expensive activity. Yet, if you look at the graph, population of North America and Europe was growing (will omit here how) steadily in the last 15 years, yet, energy consumption remained rather flat. It is a problem, the system capped real wealth-creation and the runaway process of social stratification began in earnest. But, but even when sensible federal or state's level decisions are made, they still end with this:
Or with San-Francisco which is by now is a certified shit-hole, same goes for many parts of L.A. And, in general, no one can afford to live anymore in NYC or pretty much any large American urban agglomeration, unless it is Deep South, but even there. In other words, the United States allegedly has a shitload of money, allegedly its economy grows, but it doesn't and things deteriorate practically everywhere. Like in this report:
It is not just the issue of mood or narrative, there is a growing realization in the United States that the country is in trouble. But even abundance of energy and "money" still cannot prevent a contraction of the only thing which matters--real economy and everything that follows with it, real, not part time retail, jobs and wages. The system is utterly broken and there is NO workable solution to this quagmire. The energy consumption graphs will remain flat, until they will begin to dive and the dive is coming. It is a perfect storm of corrupt elites, collapse of education and upbringing, and of radical de-industrialization committed in pursuit of financial chimera. It is what it is. Only nations which consume (and produce, that goes without saying) actual energy will eventually progress towards finding or discovering new sources of it and will push towards new frontiers of not only material wealth, which is important, of course it is, but will see new horizons for human development which will be in space travel and colonization of Solar System. For that, one will have to have sources of vast energy, real advanced manufacturing sector and population which sees a larger purpose in life than mere accumulation of wealth.

The secret to it? Consumer matrix, most normal people eventually understand that material wealth satisfies only to a certain point and for many this certain point is usually fairly well-defined: it is decent housing, decent transportation and....You add your points. Good thing to discuss.

UPDATE:  No comments. All to the point.