It seems incurable in the US. I was reading Kunstler's predictions (I don't make "predictions"--it is a silly business) today and bang, here it was:

Russia is not our economic rival. Vast as its land-mass is, Russia’s economy is not much bigger than the economy of Texas.

Ahh, no.  In one phrase, immediately, two major mistakes which are so symptomatic of the America's mental health this very same James Kunstler writes about:

Of course, this matter has even greater significance for correcting the meta-problem of America chronically lying to itself. RussiaGate and its spinoffs was such a gargantuan edifice of malicious dishonesty that it must be deconstructed in the courts, or the mental health of the nation may not recover.

Getting their numbers straight could be a good start. In fact, let's take a look at numbers.

1. Will start with this tired thesis of Texas' economy being either larger or the size of Russia's economy. The brief look at the size of the Texas economy reveals, based on US government data, that its GDP was in 2018 $1.803 trillion.  Mind you, with Texas (as is the case with the US), does NOT have PPP index because it doesn't exist for the US or, rather, equals its nominal GDP which is denominated in US Dollars for global economy--a travesty of unimaginable scale. But still. This is not to mention the fact that out of those 1.8 trillion, huge chunk is "contained" in well known to us "industries" such as FIRE and other unspecified services. 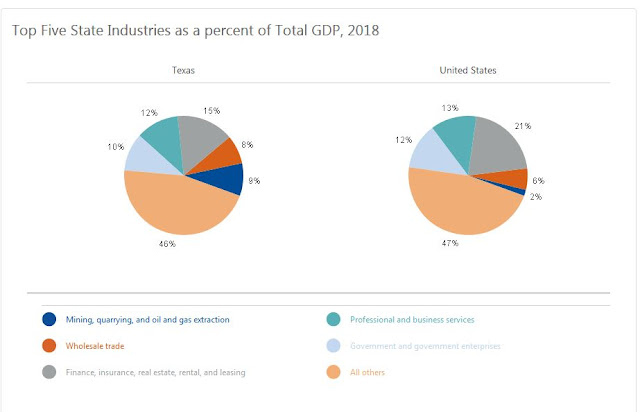 Go figure. Of course, Kunstler forgets another teeny-weeny fact, that Texas is an organic part of the US economy at large, and no matter how large Texan egos are, Texas without the United States will be immediately reduced, if viewed as a separate nation (well, they think themselves there in Texas), to a rather economically insignificant entity whose economy will immediately lose core industries required for the United States as a nation--how about aerospace? You get my drift.

Now, we, of course, have to get to this damn Russia which not only produces practically everything on her own, but has an economy which ranked 5th ( I propose, and I have the argument, that it is 4th) globally and its actual size in accordance to IMF--another belch of a dysfunctional American financial voodoo system, well, judge for yourself, for 2019:

So, Russian actual economy dwarfs that of Texas, plus, which comes as an insult to injury for Texas, Russia produces things which Texas doesn't, and if taken as a separate "economy" will never be able to produce. Texas will never be able to produce within, let alone without, the United States nuclear icebreakers, space vehicles, whole spectrum of aviation from combat to commercial, to...Ah, here comes this second thesis by Kunstler:

2. Russia is "not economic rival" for the US. It is NOT black and white, because there are few critical fields in which Russia is not only a full fledged rival for the US, but actually THE ONLY competitor. I, of course, may start with this trivial puny hydrocarbons issue, which is also partially in the foundation of US non-stop economic sanctions on Russia, because Russia is clear and present danger to only one resource the United States needs desperately to export to EU and this is natural gas. In fact, what we observe currently is America's full blown economic warfare against Russia (and EU) precisely because Russia's massive hydrocarbons industry which is not only immensely competitive with the American one, but, actually, threatens US "plan" for EU.

Then, of course, comes nuclear energy field, but here US nuclear energy is simply not competitor to a monster of Rosatom and its gigantic portfolio (from Rosatom 2018 report). 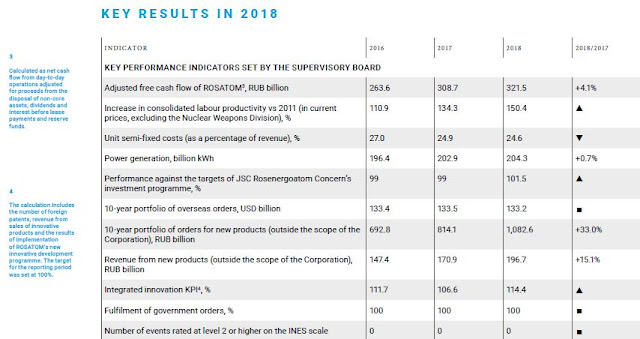 And then come weapons... Here, not only Russia is not just "economic rival", she is a clear and present danger for the US. For a simple reason, she produces a spectrum of weapons systems Texas (even integrated into the US economy) will not be able to produce, especially from concept to R&D to a full manufacturing cycle. And then, of course, Russia offers weapon systems which the United States (let alone Texas) simply do not have. I do not like SIPRI (they are very questionable source of data) but even this dated (2017 chart) shows who real bosses in the global arms trade are. 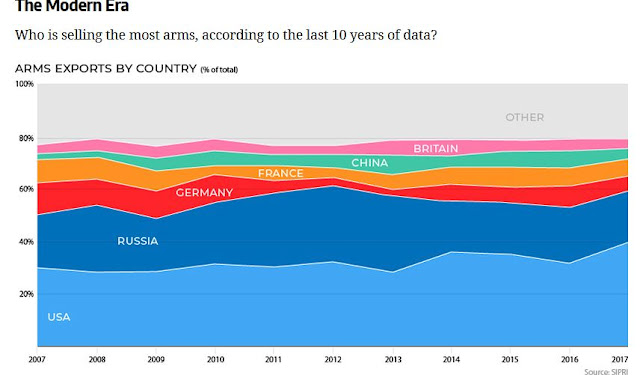 I omit here, of course, quality of weapon systems and in terms of cruise missiles, air-defense systems and combat aircraft, to name a few segments, US is losing ground pretty fast.

So, is Russia economic rival to the United States? Oh, yes, she is. Especially when one peels off layer after layer of the American financial BS which passes as a GDP and faces a rather not that huge (large still) actual GDP, or, let's put it this way, value US real economy produces. In the end, this significant piece of news shouldn't have escaped Kunstler's attention, because it is yet another confirmation of upcoming Discretionary Spending crunch in the US of which so many people warned for years.

WASHINGTON – The Department of Defense has sent a plan to the White House that would cut the construction of more than 40 percent of its planed Flight III Arleigh Burke destroyers in in fiscal years 2021 through 2025.In total, the proposal would cut five of the 12 DDGs planned through the so-called future years defense program, or FYDP. In total, the plan would cut about $9.4 billion, or 8 percent, out of the total shipbuilding budget, according to a memo from the White House’s Office of Management and Budget to the Defense Department obtained by Defense News. The memo also outlined plans to accelerate the decommissioning cruisers, cutting the total number of Ticonderoga-class cruisers in the fleet down to nine by 2025, from a planned 13 in last year’s budget.The Pentagon’s plan would actually shrink the size of the fleet from today’s fleet of 293 ships to 287 ships

All this is not just the realization of the dramatic change in the warfare, which I termed a Real Revolution in Military Affairs, with massive tactical, operational and strategic ramifications, but also the fact that current military spending by the US is NOT sustainable, especially for a minuscule amount of bang for a buck US military was getting in the last couple of decades.

These points which I outlined in this post are the main reasons for the United States initiating a Cold War 2.0 with Russia, which American elites always viewed in XX and XXI centuries as a threat and the only viable and capable impediment for their plans on global domination. Hence mental breakdown. Russians are keenly aware of what is going on with America and, as I pointed out earlier this year Russians can relate, as Irina Alksnis so brilliantly encapsulated:

However, to hear this simple advice--not to mention  following it--the United States need to stop, at least for an instance, and silence themselves. To stop shaking air with statements, declarations, demands, and threats, which come across as either strange, or outright silly because of their obvious inability to ever become a reality. But it is precisely, it seems, what the US is not capable of doing. As a result--the continuation of never-ending declaratory carousel: Moscow, Assad must go! Russians, we will provide for freedom of navigation in Kerch Strait! Russians, we will punish you for support of Maduro. But the most insulting for Americans is that only Russia can understand them. Because we remember the pain behind those words.