Look at Ovi and the way he, and two other Russians, implanted to Washington Caps, look at Trump--the collusion is self-evident. Trump handlers are in the White House to demand more from colluded and subverted POTUS. 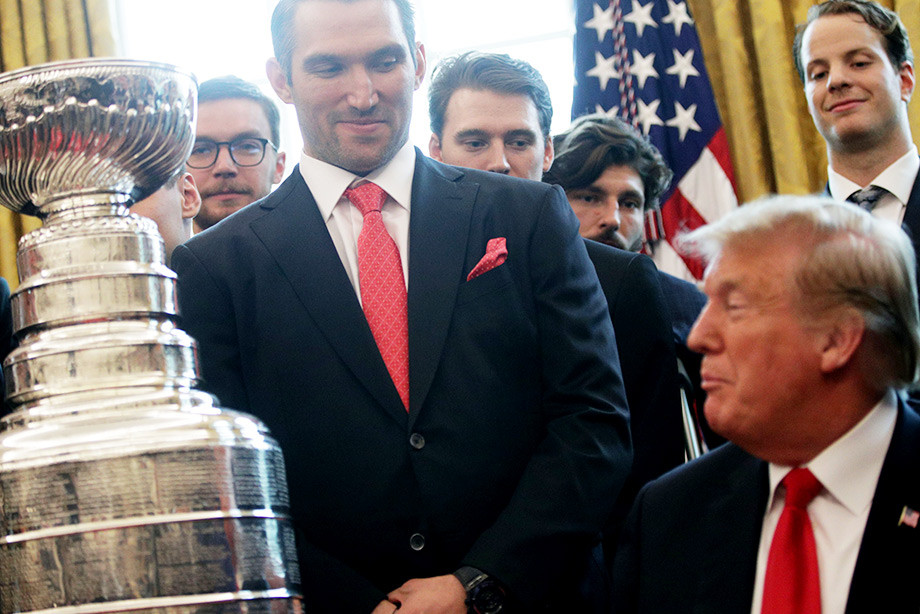 If that wasn't bad enough, Russians even penetrated...ahem..not what you think, Ivanka's personal circle.

It stares right into our faces and Mueller has the audacity to clear Trump. This cannot stand;-)

WASHINGTON (AP) — "Damning evidence" of collusion with Russia. "More than circumstantial." A scandal of a size "beyond Watergate." For two years, Rep. Adam Schiff, the House Intelligence Committee chairman, seemed to be on every talk and late-night show sounding ominous warnings about what special counsel Robert Mueller might find on President Donald Trump. The California Democrat got the president's attention — a fact confirmed when Trump turned the congressman's name into a foul schoolyard taunt. "Wow, Mr. President, that's a good one," Schiff tweeted back. But Mueller found no coordination or conspiracy involving Trump, his campaign and the Russian government, the Justice Department said Sunday. That sparked furious GOP calls for Schiff to resign from the committee or Congress as the Trump administration went on the offensive, recriminations in mind, with the 2020 elections nearing. "There are a lot of people out there that have done some very evil things, very bad things, I would say treasonous things against our country," Trump said Monday in the Oval Office, without elaborating. "Those people will certainly be looked at."

Truth is, lawyers, even those who prosecute matters related to national security and intelligence are just that--lawyers (or prosecutors). To chair anything related to intelligence one must have a serious professional intelligence background. I was vocal on that issue, in my naive attempts to point out that professional competence is a foundation for any military-intelligence related matter, when I wrote about such clown as Malcolm Nance who has zero credentials and experience in actual humint and operations of influence--it is simply way above his rank, billet and educational level. Yet, recall that this scumbag and self-proclaimed student of KGB became, together with a clueless psychopath Schiff, a Go To guy for so called main-stream sewer aka media. All that is reminiscent of auto-mechanic with AA from local community college expressing opinions on the issues of gynecology and neurosurgery.

I am not a complete idiot--it is clear that many big fish from Russiagate cesspool will not see justice and will escape, nor am I naive about Trump but for me it is the matter of principle--institutional one. I care about US Constitution and political institutions which are supposed to be guided by it. I have a purely selfish interest in all that in addition to a larger ethical and purely geopolitical ones. So, in coming weeks we will see how much push-back, if any, will be generated against treasonous DNC, Democratic Party and its propaganda outlets, but what is clear today is that it will take months to feel a degree to which the United States, completely out of own resources, further weakened itself geopolitically. I think we may be for a whale of a (further) decline. Could it be also Trump's game? Well, I will add to Patrick Armstrong's inconsistencies about Trump he wrote about--it was Trump who ordered by Executive Order 13806 one of the most important documents in the last decade.