She died at the age of 24, leaving one of the most stunning evidence of beauty and femininity in 18th Century Russia. 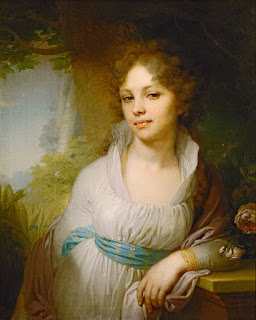 What is remarkable, in late 1980s--early 1990 Svetlana Druzhinina decided to make a movie about adventures of Russian naval cadets (guarde-marines) in 18th Century Russia, not unlike those of Three Musketeers by Alexander Dumas, which turned into a national (and international--UK ran it) movie phenomenon with an incredible music and it was Olga Mashnaya who stunned everyone with her uncanny similarity to Lopukhina, despite the fact that she was playing a serf-woman. But no matter, the stunning femininity of Mashnaya captured the imagination and, of course, was this blonde Armenian guy Dmitri Kharatyan who about 30-40 million Soviet women fell in love with, LOL. Judge for yourself--1990s and 2016.

And 30 years later. The girl is wonderful, but not Mashnaya. Kharatyan, in the same time, well, he barely ages...
Still nice, though.  Ah, yes, it is Friday.
Posted by smoothiex12 at 6:24 PM