These are, so called, five guiding principles of the EU policy towards Russia.  If there ever were any doubts about EU being run by imbeciles, after these remarks they should be completely dispelled. Things, and people, should be called their proper names. It is not enough for Europe to be reduced to the status of Turkish whore, now it wants to outdo itself in dealing with the last real ally this emasculated geographic appendix of Eurasian land mass can possibly have before being turned completely into "multicultural" cloaca. To be sure, Europe is heading this way, but, what is most important, it doesn't have any tools of dealing with this situation, among many other problems it faces.

European "elites" today are nothing more than a collection of political and state bureaucrats who would sell their own nations (what's left of them anyway), honor (if they ever had one), principles (if they ever had any), possibly closest people for the sake of their careers in the totally dysfunctional leviathan super-state, which is good for nothing and more and more resembles a major train-wreck. Today, it is totally legitimate to talk about almost total post-WW II European mutation into the US lap-dog with a minimal, if any, foreign policy subjectivity. The proof is in the statement of Europe's two most spineless and cowardly creatures who, for absolutely unknown reason, are called heads of their respective states (or whatever remains of them), Francois Hollade and Angela Merkel, in regards to enforcing of the anti-Russia sanctions.

Well, as old saying goes: tell me who your friends are and I will tell you who you are. With "friends" like Poroshenko, I guess, the natures of Hollande and Merkel can not get any clearer than that. I pity French and German people (I deliberately do not use "the people of France and Germany") but, pity aside, let's see what those sanctions achieved. But before I get to this I want to state my long-held position that I am categorically against lifting the sanctions for two reasons:

1. Russia's problems in economy have 90%  domestic origins and are primarily the result of headless neo-liberal monetarist policies of Putin and Medvedev. But even these remaining 10%  which can be attributed to sanctions are good enough leverage against the monetarist cabal of Medvedev's government. This government must go, together with this whole panopticon of High School Of Economics' (VShE) freaks and ignoramuses, who pretend that they know something. But even Medvedev stated yesterday a strategic importance of Russian machining centers production and pledged government's support for it.  You see, even "liberals" are forced to play right under the circumstances.

2. Russian industry, that is real economy sector (with the notable exception of auto-industry), actually started to grow. In some areas it grew 3-4 times in 2015, such as in Voronezh Oblast  and all this is thanks to sanctions.  If not for the sanctions, Russia would still be buying German power plants for combat ships. Now, this dangerous dependence on the geopolitical midget on the US leash is over, with NPO Saturn being totally capable to develop  adequate power plant by 2018--the work is already in progress. There is also no necessity to maintain some Joint Venture with French Snecma, Russian planes, including latest SSJs and future MC-21 will do just fine with totally Russian state-of-the-art PD-14. The list of sanctions-induced strategic benefits is huge. These are just some examples.

While Obama and his colleagues in Europe discuss how sanctions "harmed" Russia, Russia seems to be, finally, doing many things right. Yes, finances are important, yes, the banking system is important but, as I stated already many times in this blog, what really matters is how many enclosed technological cycles nation possesses and is able to develop--that is what really makes all the difference between simply a nation and a great power. Saudis spend on defense $10 billions more than Russia, yet, Russia is a superpower while Saudis' main export, after oil, is terrorism. Russia, meanwhile, launches Mars missions. A joint mission with European Space Agaency, no less.

And here comes this very strategic question. All things considered, especially a European "values" revolution--DOES RUSSIA NEED EUROPE? And the answer to that is both simple and complex. The Europe on the American leash, cowardly, spineless, "unified" into the super-state, with declining birth-rates, with large portions of its population turned into the mankurts, whose only care is keeping their welfare benefits and whose only value is full stomach, the Europe of emasculated metrosexuals and gay families--such Europe is not only not needed in Russia but, in fact, represents a clear and present danger. There could be no cultural, economic or spiritual common ground with such Europe, which, for all intents and purposes resembles itself less and less. What are the benefits in dealing with such a supranational structure?  Technology? Well, in some fields it is still important but Russia produces her own processors, Russian software engineers are one of the best in the world. Could Russian-produced Computer Numerical Control (CNC) machining centers run on Baikal or Elbrus processors and Russian software? Some are already running.There are very many fields in which Russian expertise is more than adequate for both satisfaction of internal needs and for staying competitive internationally.

Dealing on the level of state structures with current EU is akin to dealing with Kipling's Tabaqui without seeing face to face with Shere Khan. No serious discussion is possible with Europe, period. Discussing anything with slave is useless. All measures have to be taken to limit any economic cooperation with Europe to an absolute necessary minimum and any communications must be reduced only to healthy, which is largely conservative, forces within European nations. The rest? Russia must leave for good such circus as PACE because there is nothing to discuss in and with the asylum.  Europe brought itself to the knees completely on its own accord, including selling her sovereignty to the US and it is Europeans' business to take care of their "common home", which is on its way to becoming an outhouse.  Europeans want to liberate themselves? Let them deal with it. And while they are at it they might as well put Ukraine into their books--let them face and pay for the mess they helped to create there, as well as in Libya, Syria and other places. That sure will help their EU "strategies".

As Christopher Caldwell succinctly observed in his Reflections On The Revolution In Europe in 2009: 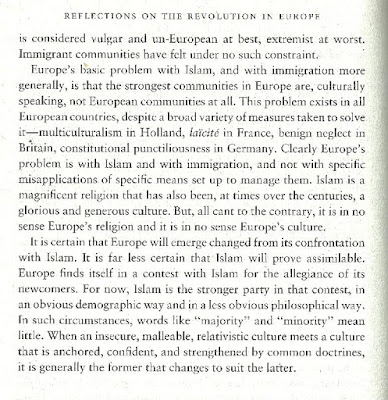