Admiral Grigorovich, Welcome To The Fleet.

Yesterday, the leading ship of project 11356 Admiral Grigorovich was officially transferred to the Russian Navy. This ship, as well as two others, Admiral Essen and Admiral Makarov, to be commissioned in April and October 2016 respectively, are a good lesson in geopolitical realism for Russia. Hopefully, the lesson has been learned. Original 6-ship series of this class was supposed to have Ukrainian-made power plant but, as you all may know, things didn't work out this way. Current regime in Kiev is anything but normal and there are no reasons anymore for Russia to buy anything from Ukraine, especially equipment for the navy. Nor was it a good idea to buy power plant from German MTU--sanctions on Russia are here to stay and it is all for the better, while Germany can forget about Russia's market. Good riddance. NPO Saturn is already busy with designing power plant for future Russian ships. Russia is totally capable of producing first class power plant (COGAG) for any class of the ships.

Meanwhile, three other hulls of this class, most likely will not get their power plant on time and could be sold to India with Ukrainian power plant. Initially, all six were planned for the Black Sea Fleet, now, it seems, the Black Sea Fleet will receive only three. This changes operational picture substantially. The Black Sea Fleet for decades, for a reasons of Crimea being a de jure part of Ukraine since 1991, was the most neglected Russia's Fleet. Times changed and six project 11356 frigates were supposed to be the core of what would eventually emerge as remote analogue of the Soviet Navy's 5th Operational Squadron (OPESK). While deliveries of the brand new SSKs of Kilo-class are on track and formation of the separate brigade of this highly capable subs is on track too, the Black Sea Fleet will need more in terms of its surface combatants. One of the stop-gap solutions could be, and it was articulated already, delivery of increased numbers of project 21631 Buyan-class and perspective project 22800 Karakurt-class  missile corvettes. There is also a possibility of some of the project 22160 patrol ships adding to what can be a mighty first salvo of deadly Kalibr and Onyx missiles. The problem with this solution, however, is that none of the missile corvettes listed have robust enough air defense systems and carry only short-range self-defense weapons. Grigorovich-class frigates were supposed to be the ones providing a robust air defense cover with their Shtil' AD Complex.

It is difficult to predict how this problem will be solved but there is little doubt that something is in the works. In the end, the transfer of Northern Fleet bound couple of project 22350 Admiral Gorshkov-class frigates with their mighty Poliment-Redut can not be ruled out. Meanwhile, the new ship for the Russian Navy and she is a beauty and a damn dangerous one at that. 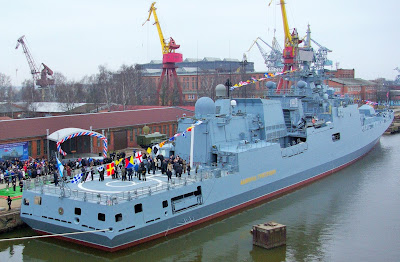 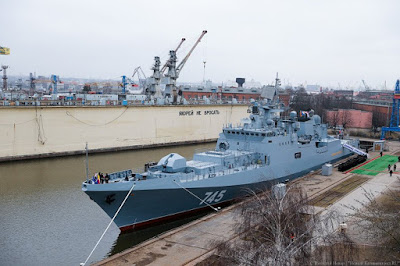 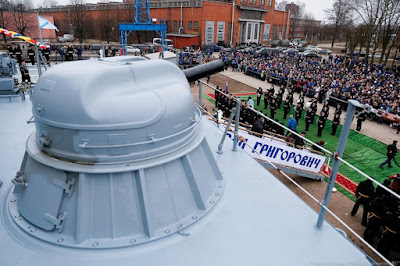