So, what is a "framework" for comparison? Speaking in a very broad terms, and here I am not writing an academic thesis, but rather a popular explanation on military power, a framework is a taxonomy (or set of taxonomies) of sorts which allows to relate military powers. Since even the American, usually highly globalist, set of doctrines emphasizes a nation-state as a primary player in global politics, we can refer ourselves to a popular metric known as the Composite Index Of National Capability (CINC) which is a measure of nation-state's six resources which are considered to be most important (or as Stephen Biddle defines them as "most consequential") for military (power). They are:

This, oh, hell yes, taxonomy is a favorite "predictor" of victory and defeat for proponents of the Material Preponderance Theory of military power. The higher is the nation state's global share of those totals, the theory goes, the higher is the score and, consequently, the more it is militarily powerful. It is, obviously, calculated as an arithmetic average (mean). You can review those basic, 5th grade level, formulas in Wiki, as well as review the ranking of nations in according to CINC.

Even after the brief review of both: "math" behind this theory and the table, granted it is from 2007, it becomes painfully clear that the theory is either wrong or incomplete, which is a "softer" version of wrong. I would suggest the latter, while Stephen Biddle went further and altogether discounted (or even rejected) all available "military power" theories in favor of his own (in reality, not) "theory" of forces deployment as a main predictor of victory or defeat. He wrote a good book on this issue, which is worthy of reading, but Biddle's "predictors" are still NOT ENOUGH, nor his "sample space" creates enthusiasm among true aficionados of military history:

Here we encounter couple of terms, which are the part of any military doctrine--Victory and Defeat. Doctrines, of course, are not written for achieving a defeat but are developed for the opposite objective--achieving a victory. We will review what defeat and victory are later, but for now, we should ask ourselves a question of how much is missing in those, obviously incomplete, 6 points of the CINC. This brings us back to the square one--WHAT FOR military power.We also have to define Superpower or fairly trendy Hyperpower. This hyperpower term is very popular in the midst of neocon Parnassus which is well known for its outlandish military and geopolitical "theories" but, since the term exists, we may as well define what is behind it.

We start with defensive posture in CINC framework in order not to become overly general and not to reduce the argument to platitudes.

This refers to numbers and quality of armed forces' personnel and mobilization resources of the nation (remember, we are talking about nation-states?). In general, it is about how good nation's actual military people are and how good (and large) are its mobilization resources. Couple of the major metrics of the military personnel quality are its educational and intellectual capabilities. They, those capabilities, translate directly into combat capability, especially on the modern battlefield which started to emerge during WW II. Sensors' and computers' paradigm shift happened already on the battlefields of WW II and by 1960s satellites, radar, modern communications, advanced sonar, new materials, new ammunition, gyro-inertial navigation complexes and advanced weapon systems became  every-day reality of modern armed forces. That meant only one thing--a requirement for modern soldier and, especially, sailor to be prepared and educated well enough to operate a very complex military technology.

Enter Admiral Rickover, who, as early as 1950s, recognized the importance of this "personnel' issue and, as he usually did with anything, created a lot of commotion. So much so that US educational establishment was forced to publicly debate him, especially in regards to what Rickover defined as...."Russian educational menace" (c) 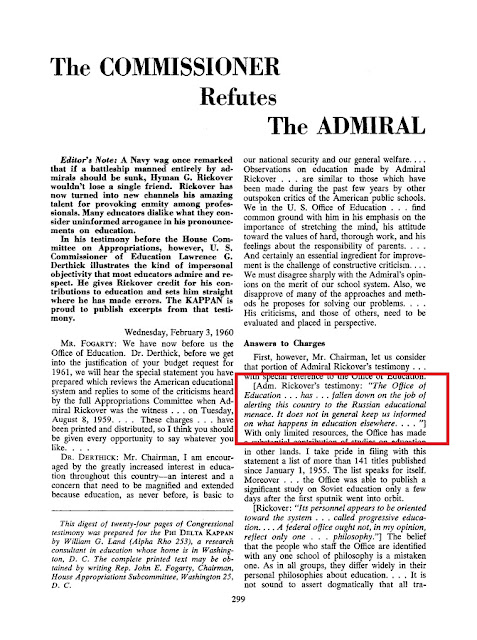 While Western Cold War propaganda was portraying Soviets as backward and robot-like, the shocker of Sputnik forced Life Magazine to seriously re-evaluate the reality and when it did:


it turned out that average Soviet public school graduate was receiving three times more instructions in math, physics, chemistry and biology than it was stipulated for the entrance to....Massachusetts Institute Of Technology (MIT). That fact had a major strategic ramifications. Rickover got the message. Yet, the myth of educational (that is qualitative) superiority of the US military personnel endured, and continues to endure, despite the fact that even today, after two decades of debilitating and criminal reforms, Russian (forget Soviet) public school education, especially when it comes down to STEM instructions is far superior to the American one. Obviously, it absolutely doesn't mean that every military man of Soviet/Russian Armed Forces was or is Einstein reincarnate,  absolutely not. Both yesterday and today Russian Armed Forces continue to have a substantial number of the dumbest sons of bitches who would make Three Stooges look like geniuses. What it all means, is that on average intellectually Soviet/Russian enlisted military personnel was at least on par with the best (read American, as it is a popular point, at least in US) military personnel and thus was capable always (as 75 years of recent history proved beyond the shadow of a doubt) to be very adaptive to the modern battlefield and capable of operating most complex weapon systems effectively. It also means that in terms of trainability, that is ability to obtain and hone most complex combat skills, Russian average military man is....well, pretty good. In Soviet/Russian combat training methodology those are still known as Complex of ZNU (Znaniya, Navyki and Umenia--Knowledge, Skills and, ahem, Skills again). I would leave elaborations on IQ and its distribution issue to Anatoly Karlin, after all, if not for his post on military power, I, probably, wouldn't write anything dedicated to this specific issue for a long-long while. As per officer corps, I will touch upon it later.

The question here is: can this complex of skills or, more generally, educational-intellectual capability to fight modern war be quantified? Yes, it can. In fact it was quantified long ago. For anyone, even remotely acquainted with combat training, it is known that most of the tasks carried out by military personnel are split into the set of constituent elements which are described by numbers. From the time it takes a soldier (sailor) to get his personal weapon ready to be used and standard deviations while shooting targets (or enemy) to the times of changing damaged block in radar or dealing with any issue of ship's or sub's damage control--everything was quantified. Hence the regimented  and, frankly, quite uncomfortable existence of military professionals the world over. Once we get those numbers, we can, theoretically, compare the quality of military personnel, by going number by number of every conceivable element of combat training and operations, granted, of course, that those numbers will become available after being declassified. Hell, we can always  play games with some functionality and use exponential function as a descriptive tool of the military personnel's quality. How about this:


As long as we assign numerical coefficient to any quality, speaking in a very generalized manner, we can always concoct some sort of the metric. This metric can give us some insight into what is going on. As an example, after Royal Navy's disastrous acquaintance with Exoset missiles during Falkland's War in 1982 and the loss of HMS Sheffield, US Navy made correct conclusions and when USS Stark got hit by two Exocets in 1987 the crew of Stark have, certainly, given an excellent account of themselves while fighting for ship's survival. The ship survived and, eventually, returned to the fleet. In this respect, that is damage control, Stark's crew exhibited an excellent capability or quality. The problem of this metric, however, is in this coefficient C in our:

Ce^(whatever the hell we want to put here)

We can quantify whatever we want and, if we have too much time on our hands, we can delve even deeper into the fascinating world of mathematics. After all, there are numerical expressions of even geopolitics, such as Vladimir Potehin's Theorems of Strategic Advantages Of Central Localities. If anyone wants to see how our world could be quantified, you can see it here:

Potehin, Theorems Of Geopolitics (In Russian)

This looks about right;-) I am being facetious, of course. We are not going to go  deep into the math, with the exception of Lanchester-Osipov's differential equations, really simple ones, and some Salvo Modelling, which is even simpler. The problem with this coefficient C is in fact that it is realistically not quantifiable. After all, wars are fought by PEOPLE, humans and we are very complex machines, especially so under duress which what military service actually is--cascading stages of constant duress.  Remember Napoleon's maxim that in war "The moral is to the physical as three to one".

How can we give number to this "C"?  How can we quantify morale? The trick is, we still can do it but we have to consider a culture. As Brereton Greenhouse recites in his The Israeli Experience when speaking about Arab and Israeli pilots: "Courage they had in abundance, but they lacked "the high degree of our (Israeli) pilots' personal identification with their assignments...." ...There also was the unquantifiable psychological element explained by the Israeli flight leader who reported on the combat. "A good pilot", he said, "is not merely a mixture of skill, resourcefulness, discipline and good judgement, but also, even primarily, an outgrowth of the spiritual values and the cultural level which have nurtured him..."
"Case Studies In The Achievement Of Air Superiority", Editor Benjamin Franklin Cooling, Center For Air Force History, Washington, D.C., 1994, page 580.

Here we are getting into the field of factors which produced things of the magnitude of Brest Fortress, USS Samuel Roberts (DE 413), Cruiser Varyag and Stalingrad. That will require very serious elaborations and we are not even half-way through discussion of the Military Personnel factor.