Last time I checked, Russia's official language, Russian, is a human language. That means you can  translate it, learn it, use it and comprehend it on this planet of ours. That is what usually assumed by Russians, especially at the top political level, which is a level of Russia's President or Minister of Foreign Affairs. Top shelf interpreters work there and they bear personal responsibility for precision with which words from and to Russian officials are translated. Well, EU "diplomacy" (I have no idea what is this) and "elites" evidently have issues with understanding a rather important human language, such as Russian, since they still do not get the message. When Russia's President tells them directly that: "... love is impossible if it is declared only by one side. It must be mutual", he expects EU to understand that he, being highly cultured and well-behaved statesman, is telling EU to go fuck itself until their attitude changes. OK, that's Putin. Sergei Viktorovich Lavrov, however, is a man who can turn the heat up a notch and that is why his famous meme is... well, famous. 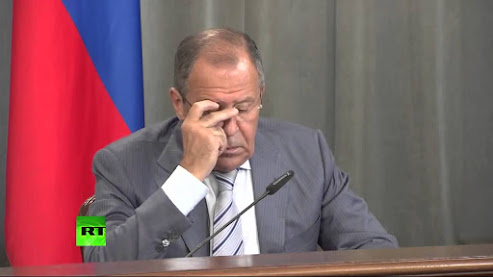 EU's high commissioner for whatever passes there for diplomacy, Josep Borrell, is in Moscow now, expressing his worries about:

The EU's foreign affairs chief has said relations with Russia are at their lowest level because of Alexei Navalny's poisoning and subsequent imprisonment. Josep Borrell was speaking during a three-day visit to Moscow ahead of talks with the Russian Foreign Minister Sergei Lavrov, who said he was ready to discuss "any topic".

Well, he got his audience with Lavrov who, basically, repeated what Putin said but in a more direct form. Speaking about EU as non-agreement capable, Lavrov stated:

Translation: because of that, we build our life out of consideration that EU is not reliable partner, at least at this stage.

After that Russia declared persons non-Grata and kicked out three diplomats from Poland, Sweden and Germany, who were especially active in fomenting trouble inside Russia around Navalny. I don't know in what language should Russia talk to EU for EU to understand that, as Lavrov stated, Russia doesn't really care about EU's internal decisions and nobody in Moscow, in reality, gives a shit how Borrell "assesses" EU-Russia's relations. Who knows, maybe Lavrov has to go to 11 and openly state to these cretins that they should go and fuck themselves, literally. Evidently they still don't get the message. EU does not have a subjectivity in international relations, it is an object which is there to dance to Washington's tune. Russians are fully aware of that and that is why Russia is turning away from EU. Including being somewhat reluctant, for now, to let go of Nord Stream 2 for purely geopolitical, not economic reasons as Ischenko thinks, a view which I share. I also completely agree with his assessment, that abandoning NS 2 for Russia is merely an inconvenience, for Germany--it is a catastrophe.  In what language, then, do you communicate with a bunch of cretins? Obviously, they do not understand human language.

To underscore the absence of intelligent life in EU, I will leave this link (in Russian) and you can easily translate TASS reporting using Google translate tool. They don't even understand that most of Russia laughs at them. As you can see from this EU graph, the trend in economic relations was pronounced already by 2019. Russia simply started importing less from EU.

Even when adjusted for Covid-19, it is clear that imports from EU to Russia will continue to decline in mid to long-term. As some people in Russia suggest: what about trading Navalny for Assange? That could be a really good deal, especially since politically Navalny is dead, especially after his disgraceful behavior in court today, while his "org" was effectively dismantled and there are many sad people in MI-6 and CIA today because of that. As strategic truism states, don't try to make strong plays with a weak hand. But then again, do they even understand a human language, any human language.
ADDENDUM: What is wrong with these people?

President Joe Biden has dusted off an old story about how he came under fire while visiting Iraq, more than a decade after he admitted the claim was somewhat exaggerated. ‘Where’s the MSM outrage?’ social media users have asked.While addressing US State Department staff on Thursday, Biden hailed the diplomats for showing “great personal courage,” which the new US president has purportedly seen first-hand. "I’ve been with some of you when we’ve been shot at," he told the audience. It’s unclear what Biden meant by the passing remark, and the White House has not elaborated on the statement.

What's the deal here with stolen valor pandemic of which I wrote before. It is becoming nauseating with US politicians telling fairy tales of their "courage under fire".
Posted by smoothiex12 at 11:18 AM