But people sent me "news" and "opinions" about slight skirmishes in Russia related to "opposition" rallies in defense of Alexey Navalny. My first message to all: it was a pathetic show of a few thousand infants, including many children, who were controlled and, inevitably, dispersed. As US Police Telegram Channel wrote to Russian colleagues: 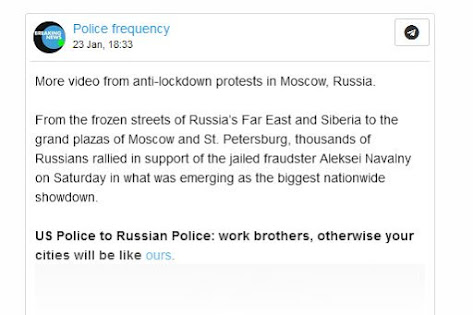 They worked, alright. Now most important--tomorrow the process starts of bestowing "awards" to all those "protesters" which will range from stern conversations, the return of school kids to parents (it already started), penalties, imprisonment and, obviously, attaching records to these Navalny's morons as troublemakers, which will ensure that these cretins will pay dearly for that by means of being unemployable in any serious and well-paying organizations. Moreover, any, I underscore, ANY, so called internet "analysis" of some "upcoming Russian revolution", some "weakness of power" in Russia (remember, Putinvseslil)--it is all BS for hype and click-bait. Reality is such that this protest was... 5.5 times smaller than similar actions 4 years ago and, realistically speaking, it, as was expected, had more "journos" than protesters (in Russian).  20-million Moscow saw a whole 4,000 kids, while 2-million Novosibirsk saw...like, I don't know, 40-50? 600,000 Vladivostok saw about 300, with 200 of them being underage. So, do you get the picture? Can we now move on, but make a check in the box across US "diplomacy" now involving children. No surprise here, it is their MO to hide themselves behind children.

Russia's Ministry of Foreign Affairs already called on US Embassy to visit Ministry where American "diplomats" will be talked to for taking an active part in helping underage children get "politically active" (in Russian). That brings us to the whole Navalny's "poisoning" affair as, primarily, a desperate attempt by the combined West on PR action (aka operation of influence) against Russia. Assuming, which is a really risky assumption, that not all people in Western intelligence-"diplomatic" establishment are complete morons, it is clear that no sane person would expect actions of this type to undermine "Putin's regime". Provide some TV picture for brainwashed Western public? Sure. But that's about it. Russia's political reality is such that it requires an apocalyptic event to change her and even then, it wouldn't be towards the outcome desired by the West. As per Alexey Navalny--everyone in Russia with IQ higher than the room temperature knows that he is an asset of Western intelligence orgs and his support base is within the statistical error, when counting votes during elections. Today's events demonstrated this perfectly. Criminal cases are being now opened as I type this (in Russian). Move along, move along--nothing to see here. Putin again "escaped" the wrath of minuscule minority of Russia's alternatively gifted teenagers and elementary school kids. Talk about "revolution".