As many news agencies reported:

The S-500 Prometey, Russia’s next-generation surface-to-air long-range missile system, has completed most of its trials and is ready to go into series production, according to the Russian industry and trade minister.The development of the system is in its “final phase” after each element of the system was tested individually, Denis Manturov told Interfax in an interview. The current work is focused on checking the S-500’s performance as an integrated system.“All main specifications of the air defense system have been confirmed during the tests and it is now ready for series production,” he said, adding that the hardware will be delivered to the Defense Ministry on schedule.

It is a milestone. I hate speculations, especially filled with all kinds of pseudo-scientific psychobabble with a sprinkle of many cool technical terms. So, I'll leave it to many a "military expert" out there and will add only the fact of which I am certain and spoke about not for once--S-500 is the system to deal with perspective hyper-sonic weapons, which may come out of US military-industrial complex. I know of Russian air-defense professionals who described transition from S-300 to S-400 as being in awe of its capabilities when compared with S-300s. S-500 is something of the same scale when compared to S-400. Recall also that there are few serious issues when trying to detect and track hyper-sonic glider vehicles for radar. I assume that such issues have been resolved in S-500.
Together with combat laser systems, S-500 will constitute the backbone of future Russia's anti-air and space defense and if my hypothesis that S-500 is designed to intercept maneuvering hyper-sonic vehicles with velocities of M=10+, that makes it a system which already has genuine future capability since, except for Russia, and, allegedly, China no such weapons do exist anywhere else so far. The United States is in pursuit here but will it succeed in creating something akin to Avangard is yet to be seen. Per pure anti-ballistic and aerial targets, combination of S-400 and S-500 and combat lasers, supported by short-to-medium range AD infrastructure such as new, greatly up-ranged versions of S1 Pantsir, Tor-M2 and Buk--such an environment is a worst nightmare of any combat aircraft or stand-off weapon in the world. So, at this stage, the shield is winning. It all may change, of course, but I don't see it yet.
So, "the slow blade penetrates the shield" (c). For now this "slow blade" will be, traditional now, propaganda in Western media in a desperate attempt to shift the focus away from military-doctrinal catastrophe which unfolded for the West in a sense that new defensive technologies coming on-line if not make completely obsolete, then blunt weapons, which in the West were considered effective, dramatically, to the point of ensuring that under any circumstances, including any preventive strike scenarios (they do exist) the response will be instant and devastating. It also gives Russia an additional bargaining chip in any geopolitical rearrangement scenario. This also opens significant additional commercial opportunities for export versions of S-400 and there are many, very many takers of this complex. 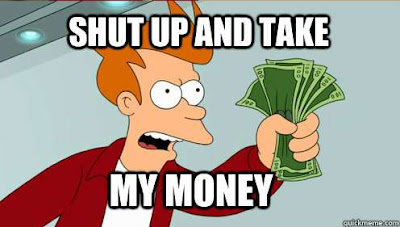 As I said and wrote--we all are inside Real Revolution In Military Affairs.
Posted by smoothiex12 at 12:51 PM