Hunchbacks. The Ships Of My Officer Youth.

Cannot believe they pulled this from archives. This is one of the first hulls of what would become a workhorse with incredible sea-keeping properties--project 205P ships. Naval Units of Border Guards KGB USSR workhorse, almost 300 tons of displacement armed to the hilt. Here is 1972 documentary about one of the first hulls of those amazing ships which became known as Hunchbacks in Border Guards and which would perform some amazing feats of service (including actual naval combat) on all Soviet/Russia's seas and oceans.

I served on many of those and we went to sea when no one else would dare. Here is one, at the 2nd pier in Baku (our brigade) in mid-1980s. 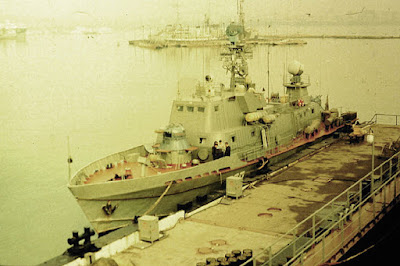 These ships still come to me in my dreams because time after time they were doing things you wouldn't expect from them. By the time I got to them in 1985 they were updated with satellite navigation (Cikada) and other new, digitized, perks but no matter--those were our home at sea. 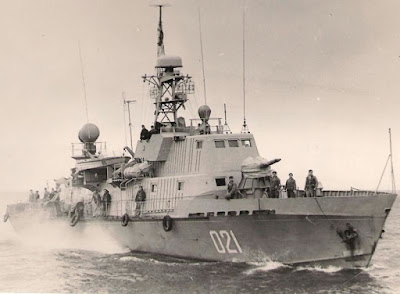 I spent time on many ships and subs in my life, from magnificent Kiev and pr. 641B SSK to Oscars, but these ships still make my heart beat faster each time I see them. This may explain, I guess, my attraction to US Navy's (later USCG) Cyclone-class ships. I am still a mosquito navy guy, deep down. In the end, these were tight, almost family and much less formal, relations within crews. We were ready to die for each-other as were those ships. Just to give some impression--these boats had official angle of capsizing (the angle at which ship...well, capsizes) of 89 degrees, they literally would pull your ass out of deadly angles. I know, they saved my, and my crew's, sorry asses on a number of occasions.
Posted by smoothiex12 at 2:22 PM