As Was Expected. Not Really A News.

As I reminded here, Russia proceeds with the modernization of at least some Project 949A  (Oscar II-class) SSGNs and Project 971 (Akula-class) SS(G)Ns by upgrading those with Kalibr missile complex, apart from other upgrades including new navigational complex and signal processing suite. In all, 10 subs of both classes were planned for upgrade. Probably one of the Project 945 (Sierra-class) SSNs will make the list too. So far it is known for sure that 2 Oscars are being upgraded. Plans may change, of course. But this is not the point--the point is in the practical arrival to a common sense decision both financially and operationally.

Apart from the tragedy with sinking of K-141 Kursk  in August of 2000 and the loss of all hands, Oscars (Russian: Anteys) have a good reputation in the fleet, despite some harsh words towards this design from some experienced Russian submariners, such as Vice-Admiral Ryazantsev, who wrote (in Russian) a scathing review of Northern Fleet's combat training practices and procedures in the wake of Kursk disaster. Ryazantsev, who commanded several nuclear subs and eventually a division of those, not without justification, points out to Oscars' major drawback--these are colossal submarines, displacing 24 000 tons. Size in ASW does matter and it's always a compromise between the size of sub and its combat capabilities. 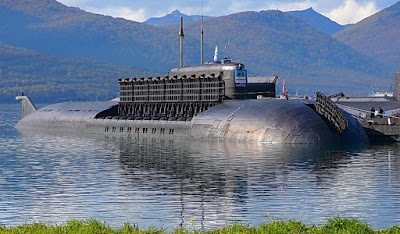 Yet, Oscars are very silent subs and, I would assume, after undergoing deep modernization will reduce their physical fields even further. With maturing of Kalibr complex what used to be considered  Oscars' weakness becomes a serious advantage. In accordance to different sources, after modernization Oscars will be able to carry 72 missiles. This is 3 times the load when compared to Oscars' traditional 24 P-700 Granit (SS-N-19 Shipwreck) missiles.  While P-700's conventional warhead of 750 kilogram of "sea mix" is larger than about 450 kilogram warhead of anti-shipping 3M54, the difference, however, between the two is startling. Oscars will be able to carry a thoroughly modern Kalibrs in different configurations, still providing for a massive anti-shipping salvo, while carrying also a conventional (or secondary nuclear) deterrent of dozens of land-attack 3M14. This is a massive and deadly firepower. With 3M14 range of (officially) up 2500 kilometers, conventional strategic containment or, in layman's lingo--the ability to blow the shit at enemy's coast and deep inland is simply unrivaled in platform-to-platform comparison. Strategic implications of this are enormous. With upgraded Akulas getting presumably 12-14 Kalibrs each,  Russian Navy gets not only massive fire-power but a great deal of flexibility, which was delayed due to a catastrophe which befell Russia in 1990s.

Obviously, the program of modernization of submarines of these types pursues the objective of a conventional strategic containment. Combined with a very long range cruise missiles' capabilities of Russia's Air Space Forces, these become a stabilizing factor in Russia's defense against  any kind of "democratization" or "humanitarian bombing". But behind that, what emerges or, rather, reemerges is a traditional Soviet/Russian post-WW II view on sea-denial. Russia's evolving submarine force is the same old tool from Sergei Gorshkov's tool box. In some sense it is his vision updated to the realities of the early 21st Century. Gorshkov, certainly, wanted a "balanced Navy"--a force capable of both Sea Denial and, regionally, Sea Control (Blagopriyatny Operativnyi Regime--Favorable Operational Regime). Sea Control idea at that time required a massive investment in the surface fleet with aircraft carriers being a pinnacle of such a fleet building effort. Yet, throughout this effort in 1970s and 1980s, Gorshkov never relented on a massive, in fact, highly prioritized development of submarines, long range naval aviation and cruise missile complexes they carried. Today, under new geopolitical and technological realities it becomes obvious that this was a correct accent.

1. Aircraft carriers will inevitably devolve or, rather, transform  into a  smaller and less expensive "stability" platforms capable both of limited power projection and, most importantly, ASW. They also will work with a surface fleet in support of its SSGNs.

2. All submarines, of all major types, with the exception of SSBNs, will become cruise-anti-shipping and land-attack missile carrying platforms. They also will become (if not already) fleet's main conventional striking force both against enemy's fleet and land targets.

3. We can only try to imagine what will become of fleet once weapons such as Zircon and even faster and deadlier missiles will get on-line and this reality is not coming--it is already here. It also remains to be seen what would happen with carrier aviation with navalized versions of air-missile-defense complexes S-400, let alone S-500, being deployed to sea.

As Commanders Joseph A. Gattuzo  and Lori Tanner, both carrier aviators with an immense experience, noted more than a decade and a half ago:

"Money spent furthering manned aircraft technologies and programs—the CVNX (proposed Nimitz-classcarrier replacement) being one of them—is like polishing cannonballs so they will fly a little farther."

They saw it coming. Russian Navy knew it all along, despite ever emotional clash between submarine and carrier lobbies--yes, Russian Navy does have its own "trade unions", if to quote Elmo Zumwalt. That is what limited and precious resources do to one--give birth to a new fighting doctrines.
Posted by smoothiex12 at 8:53 AM