Russia Supplies Taliban With... Whatever.

OK, let's speak in broadsides, especially since I am not going to say anything what most of us don't know already: US (and NATO) lost the war in Afghanistan. Not a single political objective was attained there and the country (Afghanistan) remains what it was for the last 37 years--a war zone. Enter NATO's Supreme Allied Commander General Scaparrotti with yet another, completely loony, allegations that Russia is "supplying" Taliban. The immediate question is: supplying with what? Obviously, NATO's big honcho ended up not receiving the memo that Taliban is considered a terrorist organization in Russia and, unlike the United States, Russia has a superb record in fighting terrorism not playing with it. But the key to this stupefying lie is, probably, in this phrase:

In a statement to the Senate Armed Services Committee, Scaparrotti said Moscow was "perhaps" supplying the Taliban. In February General John Nicholson, the US commander of NATO forces in Afghanistan, testified that Russia is encouraging the Taliban and providing them with diplomatic cover in a bid to undermine US influence and defeat NATO.

By now, anything coming from the top echelons of power in US and NATO, especially with such clarifications as "perhaps", "possibly" or "likely",  regarding Russia should be treated only as a case of total paranoia which makes McCarthyism tamed in comparison. But I have to return to the same question: supplying with what?  What is "encouraging", what does it describe, how is Russia "encouraging" Taliban? To do what?

Don't expect an answer. like a Russian "Hacking", or Russians' finally disposing, in a most brutal manner, of Bambi and Minnie Mouse, there is none. US and NATO have been defeated in Afghanistan already and it will fall to Russia, who anticipated the loss of a "coalition" there as early as 2012, when discussing this scenario, to defend her own borders and clean up the mess which NATO (US) left in Afghanistan. Obviously Scaparrotti forgets how Russia helped "coalition" to fight this very Taliban. But really, who needs to remember this--US and NATO are so wonderful and great that anyone who provided a strategic help to them has to feel privileged to do so and keep their mouth shut. I think Scaparrotti and others need to take a really good course in this area's history and learn how, first, Tsarist Russia, then Bolsheviks, then Soviet Union and now modern Russia fought and continue to fight this scourge (greatly facilitated by the US) for centuries. When Commander of the Soviet 40th Army speaks openly in NYT that:

In fact, we were the first to defend Western civilization against the attacks of Muslim fanatics. No one thanked us. On the contrary, everyone was impeding our actions: The United States, NATO, Iran, Pakistan, even China.

He means it and, then again, Russia does not negotiate with terrorists but she, when needed, will contact them--to convey a message or else... But there is one very important message in all this little "presentation" by Scaparrotti to the Senate Armed Services Committee--inability to deal with reality together with a very short memory. But we knew this all along, didn't we? 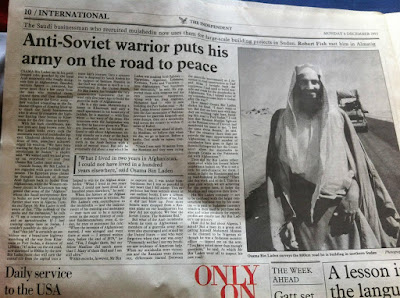 P.S. Per Russian influence growing in Afghanistan, hell, USSR has built half of Afghanistan's infrastructure, from hydroelectric dams to Kabul's Polytechnic University.
Posted by smoothiex12 at 1:21 PM