It matters what they carry as weapon systems which defines them as either "bad" or "good", to put it in the layman's lingo. Remarkably, this is not the idea former Senator Jim Talent and former armor officer Lindsey Neas can wrap their brains around, when they write, in the neocon rag The National Review, next:

There is good news at last for America’s armed forces, or at least for the Navy. A bipartisan group of legislators has sponsored a bill that has the potential to address at one stroke a first-order priority for American national security: upgrading and expanding the nation’s shipyards. ... The Shipyards Act is an outstanding first step on the path to revitalizing America’s sea power. Given the pressing need for a bigger Navy, however, the sponsors should also seek to set aside additional money from the proposed infrastructure bill to increase the Navy’s shipbuilding accounts and buy more vessels as the shipyards expand.

I write extensively on the pitiful state of the American shipbuilding industry in general, and commercial one in particular, in my latest book. So, the fact that some steps are being undertaken to revitalize some shipyards seems to be a logical set of actions. But the issue here is not that pouring money on the problem will somehow resolve a huge list of issues for the United States naval power in its attempt to shape itself up trying to meet China PLAN's challenge. Not only Congressional Budget Office (CBO) doubts that this whole thing will make huge difference, when writing about subs:

CBO’s projection includes anticipated improvements in productivity. Automation is expected to lead to a onetime 3 percent increase in productivity—that is, tasks will take 3 percent less time, on average. For example, the design and manufacture of replacement parts is being automated in ways including computer-aided design and automated cutting of sheet metal. Because some tasks are more difficult to automate than others, the amount of time saved per task will vary greatly. The agency also projected that shipyards would realize the 5 percent efficiency gain that the Navy anticipates from the infrastructure improvements made under SIOP. CBO projected that both increases in efficiency would phase in from 2022 to 2031

It is all fine and dandy, but if one follows Talent's and Neas' ideas of "sea power":

So the Navy needs a lot more ships. No less than six recent reports and studies — including the Navy’s formal position of a 355-ship fleet by 2030 — recommend a combined total of between 355 and 688 manned and unmanned vessels in the fleet. The exact nature of the needed expansion will depend on our maritime strategy; the evolution of technology, doctrine, and tactics; the size and capabilities on the PLAN, and the contributions of our allies and security partners. That said, the Navy needs to do at least the following over the next decade. First, sustain production of aircraft carriers, destroyers, and both attack and ballistic-missile submarines. Second, in keeping with a growing consensus, ensure a substantial number of smaller surface combatants that can provide both forward presence across the Indo-Pacific region, to conduct the wide array of missions necessary in littoral environs, and the kind of distributed threat that will strengthen deterrence against Chinese aggression.

One is immediately struck by, to put it mildly, "platform-centricity" of naval thinking of these two guys. Sure, numbers matter, they always do, but the issue, apart from making a strategic and operational sense to ramp up submarine production, where even today the US Navy enjoys a decisive technological edge over PLAN, is what those aircraft carriers and destroyers will carry as their weapon systems? I omit here a reality of building more carriers, but does the United states seriously think that it can "outcarrier" mainland China which was steadily improving what no US aviator encountered since Vietnam, its comprehensive air-defense system, and what no US aviator encountered since Korea--a very capable Air Force. Even authors of this alarmist and "give-us-more-money" piece admit:

The balance of hard power in the Western Pacific has been shifting for a number of years. The implications of that are obvious. Unless deterrence is strengthened — and that means, first and foremost, a stronger American naval presence in INDOPACOM — it is only a matter of time before Beijing attempts to use force to snuff out democracy in Taiwan. That would be a disaster for America’s vital national interests in the region. The Shipyard Act, if it passes, will be the first signal in a long time that Congress is really serious about preventing it.

But I have news for them, one doesn't fight wars with "presence". China today, apart from having a deterrence of her own, has weapon systems whose analogues the US Navy will not have for a long time, if ever and that makes all the difference in the world. I am talking about, of course, anti-shipping missiles which effectively annul any legacy surface force in case of a serious war. Not only the US Navy will not be able to deploy enough CBGs around Taiwan to impress China which did put her carrier-building program in the turbo-charged mode, but the whole area around Taiwan already today is an exclusion zone for any type of a surface force, simply on the merit of China having enough "weight" in salvo to effectively overwhelm any current sea-based air-defense and this capability, augmented in the nearest future with the hypersonic capability (and, most likely, Russia-provided targeting), makes no difference in terms of actual power projection, which, as a viable concept in peer-to-peer scenario, ceased to exist at least a decade or two ago.

There are no reasons, so far, to believe that the United States can address this main, and a host of other related issues when planning for "containment" and "deterrence" of China--a set of the hollow Pentagonese catch-phrases and buzz-word which are absolutely meaningless in the world of accelerating development of a very to very long range anti-shipping supersonic and hypersonic missiles, which really do not discriminate what legacy air-defense they overcome or what legacy platform they hit--they can and will do that in case of war. This is the idea which is slow on arrival to the minds of the American naval thinkers who never graduated from the views on the naval warfare as a combination of impressive visuals and battles of carrier-centric navies of the Pacific War of 1940s. This merely underscores a complete strategic and doctrinal dead-end in Pentagon and inability to adapt to ever changing realities of a modern warfare. But, of course, visuals are important, wink, wink. But ships are merely platforms and if the US Navy thinks that it can fight China in her geographic vicinity with "alpha-strikes" of carrier aviation and with subsonic medium-range Naval Strike Missile, I think this era of naval warfare has passed long time ago. Ah, yes, I forgot--take a look at that.

For illustration, this is a new PLAN's type 055 DDG. 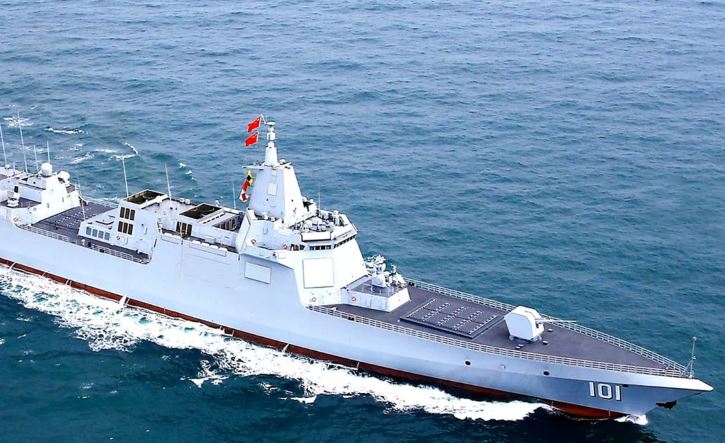 She carries 112-cell VLS, capable to accommodate a truck-load of YJ-18 anti-shipping and land-attack missiles, which are, and you may have guessed it already, Chinese versions of Russian 3M54/3M14 missiles, they even look the same, so if one thinks that such a ship cannot launch several salvos of M=3 on terminal anti-ship missiles (how about 3 salvos with 8 missiles in them?), they better check their facts. The US Navy simply has nothing comparable at its disposal. As I said, I repeat, it is how you are armed not how you look which matters. Chinese got that right, but then again--they had good teachers, wink, wink.
Posted by smoothiex12 at 10:49 AM