The (relatively) old broken record is on a turntable, again:


MOSCOW, June 4. /TASS/. The Group of Eight (G8) has been losing its importance for Russia given the changing political and economic situation, Kremlin Spokesman Dmitry Peskov told reporters. "Over the years, this forum has been losing its importance because given the changing political and economic situation, other platforms, such as the G20, where Russia is an active member, have been becoming more important," Peskov said. At the same time, he declined to speculate as to whether Russia would be willing to go back to the G8 platform in case there was an invitation to do that. A number of media outlets said earlier that the German parliament had spoken out in favor of reviving the G8 in order to better oppose the US influence on the European policies. Russia was excluded from the G8 in 2014 following its reunification with Crimea, so the group was reformatted back into the G7

I clearly understand German economic and political aspirations (and conundrum) here since Russia is Germany's critical partner in a number of economic fields, energy being a prime one, but, as I stated not for once, what is there for Russia to do in this G7? I clearly understand an allure of being "accepted" by the so called West for Russian uber-liberals, but they are not formulating Russia's foreign policy nor, as usual, do they represent any substantial or, for that matter, humanly worthy part of vast and complex Russian population. And then there is this rather touchy and sensitive, and propaganda, issue—G7 of supposedly economically most developed nations is not quite adequate to this title anymore. No doubt, G7 still boasts the highest living standard in the world but, omitting here the issue of how this standard was achieved and where it is going, it must be understood that Russia's hypothetical, and highly unlikely, return to G7, thus making it back to G8, brings into it (Russian) economy which is roughly the size that of Germany and which is smaller in this G8 only than economies of the United States (grossly overvalued anyway) and that of Japan. The rest of the economies of this G8 are distant "second" to that of Russia and those are economies of France, Italy, Canada and UK. As one can see from the data by CIA, not only Russia brings to the table a rather massive and (still) grossly undervalued economy: 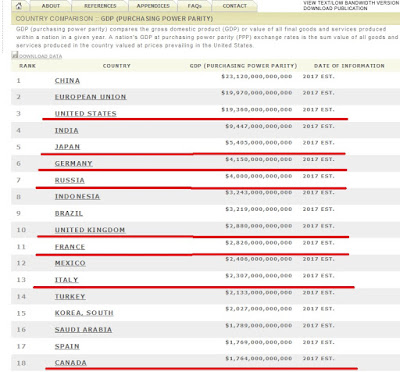 Russia brings to hypothetical G8 what Germany needs—a massive military-strategic alternative and counter-balance to the US. Recall Putin hinting to Macron several days ago at SPIEF that if need be Russia will be able to take care of Europe's "security". The United States will NOT allow Russia's return to G7 format for precisely this reason, but Russia doesn't want that anyway. Indeed, why? Russia's major economic interests today lay not only in politically unstable Europe but in Asia too and Russia is having a much more productive interaction there be it with China, India or any other major economy there. Remarkably, those economies, unlike subjugated political midget of Europe, do not really care about US "sanctions". And yes, Russia IS not only military or technological but also an energy superpower. Who would have thought that this definition given by Putin a decade or so ago and which was laughed at by Russia's so called "liberals" will come true with a vengeance and will expose those Russian "experts" as complete fraud that they always were.

We left St. Petersburg one day before the start of SPIEF—we left an incredibly vibrant, confident and immensely crowded by Europeans city. Same with Moscow which, together with many other Russian cities, also projects today this new found sense of optimism, confidence and growth, despite Russia's very real economic and other problems, but the sense of optimism and anticipation is in the air all over Russia. This also differed from 2016. Economic dynamism is there, it is palpable and CNC operators, machinists, drafters, mechanics, engineers are needed everywhere. So, what is Russia to gain by entering an informal and rather boring club when she has behind her back a 23 trillion dollar Chinese and 9 trillion dollar Indian, among many others, economies with their immense markets for technology and energy? Nothing. We are in the phase of the major shift in the global order and Russia seems to be doing just fine of her own. If Germany, Italy or France want to talk—they know where to call and who to visit.  They want real security--talk to the Boss.