Follie De Grandeur Or Why Bundeswehr Will Remain A Joke.

It is a truism by now that Western media (with some very few exceptions) are nothing more than a collection of hacks or straight forward imbeciles who live in their own created and paid for by handlers universe which does not correspond to reality in any way. US (so called main stream) media are bad, a sewer, really, but German ones--that is a special case, those gave a fabricated lie and Josef Goebbels a bad name. Here is why. Today, Berlin's daily Der Tagesspiegel published a piece by its Brussels' correspondent Markus Grabitz titled:  Steht die Nato vor dem Aus? (Does NATO Stand Out? Or, most likely, Is NATO Over?)

Google Translate does the job and the piece is basically nothing but reflexive peeing into own pants by what in Europe passes as "intellectuals"  and is full of myopia so characteristic of the EU's political (and media) class. It would have been an absolutely average and useless piece if not for this and I, with the help of translator, quote:

Does Europe still need NATO?Without NATO's protective shield and its deterrent effect on potential attackers, the security situation in Central Europe would dramatically change. The Baltic States, Poland or Hungary would not be able to defend themselves against their Russian armies with their national armies. The Bundeswehr would not be able to do this in its present form. The German economic power is, of course, three times the size of the Russian economy. In an extreme case, Germany could afford a military equal or even superior to the Russian. This would, however, be many times more expensive than today's defense expenditure. The collective defense in NATO is not only more secure. It also saves money. All NATO countries together are more than 25 times superior to Russia. Basically, no military expert believes that Putin would dare to deal with NATO. This assumption is, of course, based on the fact that the alliance makes its alliance guarantee credible: in an attack on a member, NATO would defend this country with its concentrated force.

I literally had to rub my eyes and pinch myself to make sure that I am not dreaming and  reading what I am reading. My issue was not with geopolitical delirium and historical ignorance literally saturating this whole piece--it is expected from German media. My issue was with two phrases highlighted in red and blue and the reason for my reaction is solidly justified--this is how those EU imbeciles, from the top down, think. I will start with the "blue", which will explain why "red" is also a testament to a complete bankruptcy of EU ideology and real politics. I will start with the plane I observed not for once over Baltic Sea, including their "simulation" of the attack on our ship. This jet fighter was Lockheed F-104 Starfighter.  United States produced many good fighter jets in its history--some were good, others were outstanding fighter planes. Starfighter was a piece of shit. Everything about it was bad, USAF abhorred it and, as it is often the case, unloaded this piece of flying crap (or aka in Italian Air Force--a flying coffin) onto Luftwaffe. You think Germans were happy with this plane? Hell, no! They lost...drum roll..116 pilots in this machine in the peace time. But guess what? Germany was told to jump and the only thing Germany was allowed to do was to ask: "How high?" And high jumping Luftwaffe did until flying this POS became so dangerous and so scandalous that this fighter was basically grounded. By that time Luftwaffe lost 30% of its Starfighter force. 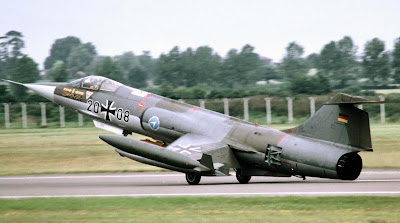 This scandal was partially due to Lord Ismay's favorite truism that  NATO (that is US vassaldom) was needed  "To keep Russians out, the Americans in, and Germans down". And, boy, did they do "keeping Germans down" thing to the fullest. Part of this "down", apart from brainwashing of Germany's "elites" and, as a consequence, a general population was in denying Germany any ability to have a viable aerospace industry. Make no mistake, Germany was allowed to have its own weapon systems' development, such as armored forces, or naval shipbuilding but no real aerospace. Participate? Yes. Have own indigenous civilian and military aircraft? No. Yes, it is true that today Germany houses a number of integration facilities for Airbus, aka Airbus-Germany and employs there 48 000 people but this are civilian aircraft and it is not a fully enclosed technological cycle. In the end, the main "thinking" for Airbus planes is done in Toulouse. Engines for those aircraft are altogether a different story. But military aviation? This is a whole other story and there is a reason why.

Currently there are only TWO aerospace powers, nations, in the world who can provide a complete enclosed cycle for a top notch, cutting edge military aircraft from extracting the ore to design, R&D and full production cycle of all components of such an aircraft, especially its avionics and engines. Do I need to name these two nations? Anybody who would  suggest that China is in this league would have to strongly reconsider. Chinese, for the lack of better word, desperate desire to get hands of Russia's SU-35 is easily explained by long time inability by China to develop world-class jet engine and avionics for its fighters, very many of which are nothing more than knockoffs of Russia's venerable SU-27s. But at least Chine has a cycle (and a shitload of money), it does produce her own military aircraft, Germany does not, even if to consider a cooperative European effort with Eurofighter Typhoon. In the end, even the Eurojet EJ200 engines used in Typhoons are a cooperative effort based on Rolls Royce design.  So, in order for ambitious Germany to get armed forces "equal" or "even superior" to those of Russia, Germany has to start with military aviation and here Germany is no contest since Russia's military (and civilian) aviation experience dwarfs that of Germany by several orders of magnitude.

Currently Luftwaffe has at its disposal 123 Typhoons (a very good fighter) and 89 Panavia Tornado, roughly half of which has been cannibalized for spare parts and eventually failed to deploy as part of NATO Syria force. So, if we are to consider what Germany has to undertake to even equal Russia in military aviation format we may start with stating that currently Germany has about 200 (maximum) combat worthy aircraft against Russia's Aerospace Force's. How Germany is going to close the gap in several hundred combat aircraft between Luftwaffe and Russia's Air Force, which deploys some of the world's most cutting edge combat aircraft remains simply a mystery to any sober observer. Russia's PAK FA (T-50) has its IOC by the end of this year. Russian Air Force took a delivery of hundreds of newest SU-30/SU-34/SU-35 and MiG-29SMTs since 2009, about 100 of a monster of MiG-31 will complete its modernization to BM modification by 2018. We are not talking about couple hundreds, the gap in modern (I underscore, modern--that is a whole shebang from glass cockpits to cooperative engagement capabilities) combat aircraft between Russia and  Germany is more like 6-7 hundred. All Russian military aircraft are produced domestically. German? But, of course, Germany doesn't have own AWACS capability, Russia does and her latest A-50Us are marvels of signal processing and radar technology.  With all due respect to German engineering genius but designing and building a Mercedes, stuffed with a bunch of electronic toys invented not in Germany (GPS is built and controlled by US) is one thing, building modern Aerospace (emphasis on space) force  is a completely different shtick. After all, Russia Aerospace forces use their own GLONASS for their high precision weapons. Russia's MRI machines may not be as good as that of Siemens but they are good enough to have Russian-made processors in them.

In general, modern Germany barely registers in the aerospace field which is dominated by United States, Russia, China and Anglo-French alliance. So, in order for Germany to "equal" Russia here she needs to build own aerospace industry. Even if to consider Germany's (sometimes greatly overrated) scientific and engineering capability--it would take her about 20-25 years at least and hundreds of billions of...Deutschmarks? If, after those 25 years, Germany will be able to produce a completely indigenous design of even half-decent (not 21st century equivalent of F-104 Starfighter) modern fighter, then the wet-dream of Herr Grabitz may come half-true. But, frankly, I do not see how Germany can match Russia in civilian, forget advanced military, aircraft. The same calculations go into other defense spheres, from making state-of-the-art nuclear submarines and weapon systems for them (yes, Germany does produce decent enough SSKs, some with Air Independent Propulsion), such as long range cruise missiles to the whole S4ISR complex, where same Germany doesn't register realistically either, since does not have viable space program (another trillion or two and about 30-40 years). For that, Germany, as a NATO member, depends completely on USA. So, if someone thinks that Germany will be able to "match" Russia here--one has to really make an appointment with psychiatrist. But that brings us to the "red" part--I dedicated a lot to this topic in this blog and no matter how it is unpleasant for some Germans, Russia's real GDP is about the size of Germany, in reality, when idiotic IMF monetary statistics is discounted, much larger than that of a Germany. It is just that Russian satellites cost less than overpriced and over-engineered BMWs.

But in the end, with all my deep respect to German people and for their massive accomplishments, some of which I admire myself, it has to be understood that modern economy and modern war is not what German journo hacks think they are. All those indices and wet-dreams fly out of the window once one has to face a very cruel reality in which Germany remains and will remain a large economy and military-political midget, who will never again make any trouble in Europe big time. But by far the most important thing those German media imbeciles have to understand that Russia has no plans whatsoever to "attack" any NATO country, let alone Germany whom Russia can obliterate by purely conventional means, let alone, if, God forbids, push comes to shove, by nuclear means. But the way things are happening now, Germans themselves do a hell of a job turning their country into a third world shithole and they, maybe, are already pass the point of no return. In this case they will have to try to "equal" something more of their own size.
Posted by smoothiex12 at 2:13 PM