An interesting development today. Evidently, Russia and China signed the contract for a delivery of Russian-made anti-shipping missiles to China. It is a rather significant development. At this time it is not known which missiles will be delivered to China and, most importantly, in what "configuration": export, less capable version, or for internal, much more capable, Russian use. If to consider the fact that Russia started deliveries of  SU-35 in their original (that is what rumors say so far), "Russian" configuration,
then it is totally reasonable to assume that it is probable that Russian anti-ship missiles (complexes) will be of a "domestic" configuration. In this case we may conclude that if those missiles are of a Kalibr family or P-800 Onyx, their ranges will be up to 600 kilometers (around 320 nautical miles), not twice shorter as it is the case with export versions. This, if my assumptions are correct (I could be wrong, of course--time will tell), will have a major effect on how China may approach her interests in the South China Sea and defense of her littoral--a proverbial A2/AD. In this case China will be able to achieve almost a full "coverage", an overlapped missile obstacle course, along most of her First Island Chain. 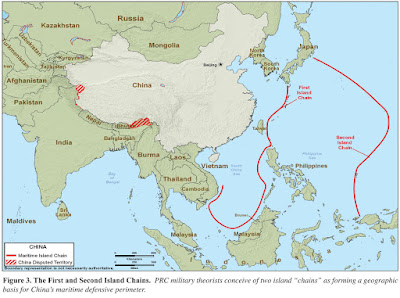 This will make the life of the US Navy surface ships rather exciting if someone in D.C. (and even with new US Administration it is not precluded) makes a decision to "project power" against Chinese interests. I omit here the legal and moral aspect of Chinese claims--I am not well versed in the legal details of this whole situation--but it is very clear that missile technologies play and will continue to play an increasingly large role in formation of naval strategies. In the end, a naval truism "a ship's a fool to fight a fort" is as relevant as ever, especially if one considers "a fort" having a capable Air Force.
Posted by smoothiex12 at 7:22 AM