Recall my week-and-a-half old post on "scientists" from the "social sciences" field. It was titled Why They Hate and dealt with Russian brand-new family of satellites Arctika-M which are clear and present danger to this whole (primarily Western in origin) Anthropogenic Global Warming Ponzi scheme. Many real scientists from around the world who still have balls and integrity (which is minority in the West) know that Arctic is a reference point to all this climate change. Well, here is some news today:

Two icebreakers are on the way to rescue ice-locked ships on Northern Sea Route. Some 20 ships are either stuck or struggling to sail, as waters in the East Siberia Sea froze earlier than in recent years.

Oops! Wait a minute, you are telling me that Russia, which already leads the world in ice-breaker technology and numbers built and being built--leads so much, it is not even fair--was on it and didn't buy this AGW BS? No way, those backward only two-gender, geophysics studying, satellite launching, hydrocarbon and nuclear using, at Tesla laughing Russians knew it all along?

District authorities in the Russian Far East have commissioned two icebreakers to aid vessels currently caught in ice in the East Siberian Sea. The nuclear-powered Yamal is due to arrive in the region by November 20, while the diesel-powered Novorossiisk will arrive by November 15, according to regional authorities in Chukotka. The rescue vessel Spasatel Zaborshchikov is also being sent. The decision was this week taken by Yuri Trutnev, the presidential aide to the Russian Far East. The commissioning of the powerful icebreaking vessels comes as severe sea ice conditions have taken shippers by surprise. There are now about 20 vessels that either are stuck or struggling to make it across the icy waters. Among them is the UHL Vision that over the last days has been isolated in the waters north of the New Siberian Islands, and the bulk carriers Golden Suek, Golden Pearl, Nordic Quinngua and Nordic Nuluujaak that are located east of that same archipelago. In the area is also oil tanker Vladimir Rusanov, as well as cargo vessels Selenga and Finnish ship Kumpula, all of which are at west-bound escort by nuclear icebreaker Vaigach. Meanwhile, in the port of Pevek are six vessels that also are likely to need assistance to make in out from the area.

No way! Actually, way. So, what gives? I will repeat my answer, yet again, Russians do not even have a competition in terms of Arctic scientific study and use. Like not even close. Just to give some clue, but Google this word Polynya and ask yourself a question why a purely Russian word was appropriated (a loanword) into most languages and became an official geographic term. The hint: Russians have been at this Arctic thing big time since 19th century, but in reality since Pomors started to venture far North starting in 12th century. So, to put in layman's lingo, Russia has a pedigree in Arctic. Russia continues to invest a massive effort into Arctic and because of that has an impressive scientific machine which conducts observations and studies in Arctic which dwarf anything the rest of the world really does.

Here is one such organization: Federal Service on Hydrometeorology and Monitoring of the Environment and its main Arctic and Antarctica Scientific Research Institute in St. Petersburg which deals with precisely those issues describing conditions of Arctic. Because Russians are backward uncultured people they continue to rely on such funny things like space-based observation, advanced scientific methods and a gigantic fleet of icebreakers (and air assets) which monitor this environment 24/7. This institute, whose one of the major tasks is monitoring Arctic ice, publishes ice maps. And here is what is so fascinating about them. Here is 2013 Ice map: 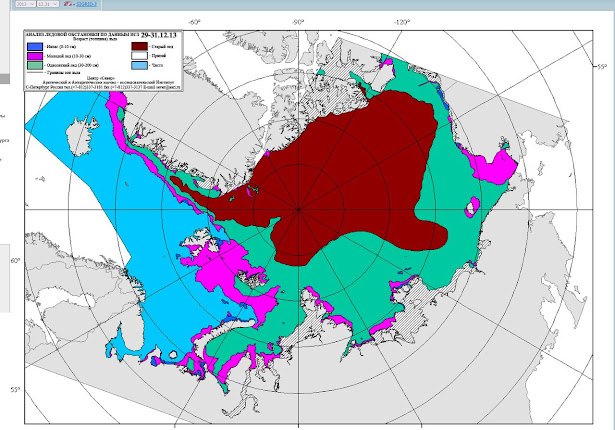 The darkest part is what is known as the "Old Ice" (more than 2 years old)--it is the thickest of them all, the green one is a "One Year Ice" which is between 30 and 200 centimeters thick, well, up to two meters. 8 years of severe "warming" and reduction of icecaps passes by, but suddenly...in November of 2021... 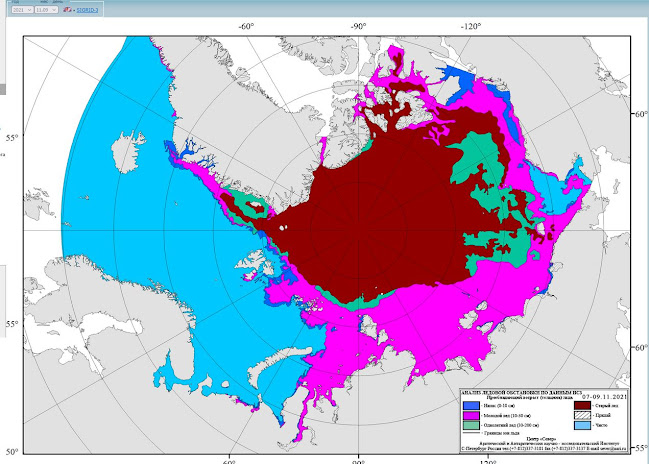 Hm, how come that Old Ice cap grew in its area over 2013 while the young ice (magenta color) is forming everywhere thus creating an emergency? It wasn't supposed to be so, but here we are. Originally we were supposed to have the Arctic ice cap gone by now. Remember 2009 and Nobel Prize fraudster Al Gore?

Al Gore has told the U.N. climate conference that new data suggests the Arctic polar ice cap may disappear in the summertime as soon as five to seven years from now.

What kind of "Data" Al Gore was talking about?  I can tell you what kind of data--a doctored BS obtained from some shitty math models created by paid shills on service of the globalist mafia. That is the "data" they operate with. Of course, Old Ice growing significantly over the last years, when it was supposed to be melting in accordance to Western climate "scientists". They are not scientists, they are models' compiles who learned a couple of math tricks and now sell this shit to those who pay them. A definition of GIGO--Garbage In-Garbage Out. Can you imagine how those damn Russians with their advanced space-based monitoring system and a gigantic ice-breaker fleet which navigates year-round the arctic waters and ice irritate them.

The max some BSer in Western politically correct "climate change" ponzi scheme can rely on is NASA's data and maybe some berth at the only US Coast Guard ice-breaker Polar Star which is finally underway. Russians, meanwhile, give rides to expeditions and those North Sea Routes convoys take measurements and observe Arctic 24/7/365, in other words--non stop. This is precisely the reason that one Lider-class nuclear giant is being built at Zvezda and two others are waiting their turn. This is 70,000 tons of a raw nuclear-driven ice-crushing power. 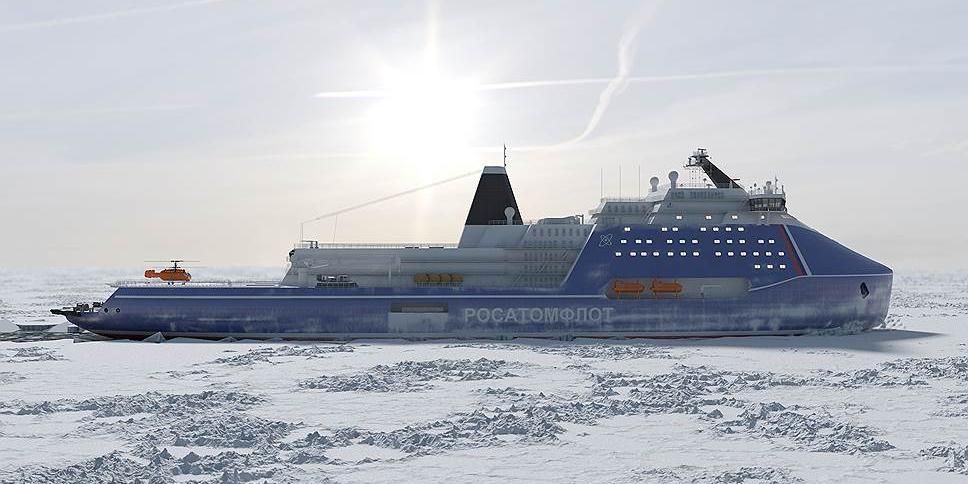 Plus take a look at the list of nuclear ice-breakers of pr.22222--one is already in commission, 4 other are being built. Does Russia look to you as a country which wants to blow colossal resources on something which will not be needed due to "global warming"? As Bismark said: even when going to take a dump, Russians create a plan. Well, make your own conclusion. I always laugh when some journo or TV BSer, or some "political strategist" in the West begins to pontificate on "science". There is less and less space afforded for the real science in the West today and unlike Old Arctic Ice which grows inexorably, the space for real science in the West continues to shrink and there is nothing funny about it. Meanwhile Russia scrambles her ice-breakers to free 20 ships from ice in the time and place where it was not supposed to be. Right. 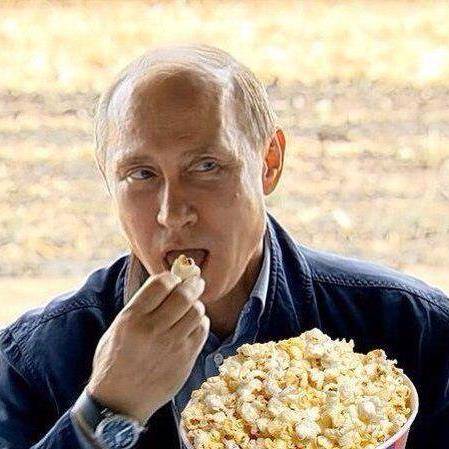 Boy, I can only imagine how desperate they are in their powerlessness and pettiness looking at this guy.