I seldom refer anyone to Russia Insider but the material they presented about possible Russo-Chinese (military) alliance is thought-provoking and is worthy of attention.  The review of Chinese attitudes towards such an alliance is interesting and "pro" arguments do make sense. But these are "con" arguments which are especially interesting and require elaborations, especially against the background of recent events, especially around North Korea--a completely contrived international crisis which carries a threat of a major escalation.

It becomes increasingly clear that Donald Trump decided, both under "deep state" (neocon) pressure and out of own volition and his business acumen, to approach, wrongly, international relations as a bully and the bullying is to be done against China. Bullying Moscow is useless because Moscow can bully back, as recent Rex Tillerson's visit to Moscow demonstrated. As I stated not for once, Russia is not a good place for bullying since Russians saw bullies who (adjusted for the time period) would make US look like amateurs. We all know where those bullies ended. China, though, is a totally different case. Unlike Russians, who are extremely well acquainted with the peculiarities of being a superpower, China is only starting her ascent to this position and has no relevant experience with handling herself as a superpower. Nowhere it manifests itself more than in a military field. And here is a rather candid admission by Chinese:

A theme discussed widely in the paper is the possibility that the alliance would not be viewed as a defensive reaction, but rather as an offensive [具备一定的攻击性] and aggressive step. On the one hand, the author identifies a classic “entrapment” argument against alliances, noting that China could get pulled into unnecessary military conflicts. On the other hand, the author notes that Russia hardly requires the assistance of Chinese military forces.
Moreover, the point is made repeatedly in the article that China’s conversion of economic power into military is a relatively slow process [经济实力向军事实力转化的速度相对更慢] resulting in a lag, even as its economic ascendance is more obvious.

Pay attention to what is highlighted in yellow. While I constantly use Correlli Barnett's definition of the national power which states that military might alone can not be used as a criteria for assessment of nation's power, there is no denial either of the fact that military might is one of the pillars of that power. Ability to convert economic power into military might, which in today's insane chaotic world is a must, is one of the major criteria which makes one a superpower. China does fail in this regard. While Chinese economic growth and her absolute size of economy are truly impressive, once viewed from the position of military-industrial complex the picture becomes much less optimistic.

As recent deliveries by Russia of advanced "russified" SU-35  fighter jets and S-400 air defense complexes to China demonstrate--competing with Russia or US in advanced military capabilities is not easy, to put it mildly. China is by no means a military pushover but, for a number of political and ideological domestic reasons in the US, Chinese military capabilities were greatly overstated.  This was done in support of the "pivot" to Asia where China is viewed by the US as a strategic threat. Yes, China benefited tremendously from American de-industrialization and produces a bulk of things ranging from everyday consumer goods to vast numbers of ships, but it is modern warfare where China is still in its infancy. Even a brief look at China's aerospace industry allows to immediately see a difference: after so many years China is still not capable to produce world-class jet engine, be it civilian, let alone military. China's COMAC C919 civilian jet will still be powered by GE-Snecma JV engine CFM International LEAP 1C--this is US-French engine. This is immediately where the enclosed technological cycle breaks down. We all know how "principled' "West" can be in shutting down the access to high end technology. Unlike Russia, who produces a whole line of good civilian engines ranging from reliable PS-90 to upcoming PD-14. Even Sukhoi Super Jet -100 flies on JV engines between Snecma and Saturn, which is a legend in jet engine design. China simply has no competitive engine. In military aviation it is even worse and there is no real aviation without full proof domestic engine production, by that I mean not just some engines, but modern cutting edge ones.

The same picture is across the board in Chinese military. While building a large surface fleet (a correct decision) China lags generation or even two in modern nuclear submarines' design. Chinese nuclear subs are notoriously noisy and are not a competitor to a world-class US Navy's submarine force, which, in addition to qualitative edge, is simply larger. Most of the Chinese air defense are knock-offs of venerable Russian S-300s of early 1990s. So, once one makes even a brief review of China's capabilities the conclusion is inevitable: while not a second rate military by any means (and improving) China is still not in the same league technologically as Russia or US, despite both Russia's and US' large issues with force structure. But above all, China's military thought and organization have not been tested in real combat, even if against inferior opponent. US has an edge over China here, and a serious one, while Russia's military history and military school simply dwarfs that of China. This factor alone may account for at least a half of military might measure. Chinese learn, there is no doubt about it but are they ready to stare Donald Trump and his brass down? I doubt it at this point but we'll see soon enough.

If the United States makes China look as if she backs off in the case of North Korea, this will be viewed as a humiliation in the nation which saw a lot of it in her 19th and 20th Centuries' history. This also may move China closer militarily to Russia and allow her become potentially a much larger recipient of Russian military technology and there are, certainly, things in Russian arsenal China really wants to get her hands on--be it latest missile technologies or even repeating India's experience with leasing one (or two) Russian SSNs. China will need them if she blinks today. If, however, China will be able to not yield to US military blackmail....well, who knows. It is a very fluid situation as of now and we may only hope that Donald Trump and his advisers will not run themselves into the trap from which they will not be able to escape without losing face completely and thus opening the possibility for a major conflict which will go out of control. 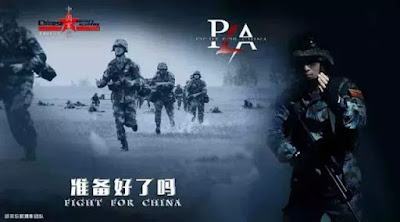