This news caught my attention today:


Russian President Vladimir Putin and Iran's Hassan Rouhani said in a phone call that aggressive U.S. actions against Syria were not permissible and violated international law, the Kremlin said on Sunday.

Evidently, Putin didn't even bother to try to speak to any "Western" so called "leaders" and seems to be unmoved by the stream of statements from the West, including Britain's official village idiot Boris Johnson's cancellation of his trip to Moscow. But there was another phrase that caught my attention:

A joint command center made up of the forces of Russia, Iran and militias supporting Syrian President Bashar al-Assad said the U.S. strike on a Syrian air base on Friday crossed "red lines" and it would respond to any new aggression and increase its support for its ally.
"What America waged in an aggression on Syria is a crossing of red lines. From now on we will respond with force to any aggressor or any breach of red lines from whoever it is and America knows our ability to respond well," said the statement published by the group on media outlet Ilam al Harbi (War Media).

I will abstain, for now, from going deep into Putin's (and Russia's) options but it is impossible to ignore the white elephant in the room and that is Iran. Some people think that China matters in Syria much--she does not. Iran does and what Iran knows damn well is that, God forbids, if Russia and US get into direct confrontation, Iran will become party to a war, regardless. So, why not then, in the face of such a possibility, start moving closer to Russia and, judging by sole phone call by Putin to Rouhani, Moscow doesn't mind this movement in the least. Depending on the next steps by Trump Administration, including Rex Tillerson's visit to Moscow, supposedly for presenting Moscow with ultimatum (a rather wrong place to do so), we may see some serious movements on Moscow's part in making Iran a much more better militarily equipped ally.

For now it is just a speculation but, I would say, with some merit to it. In the end, Iran does have boots on the ground in Syria and those are a substantial operational factor in the war in Syria. After all, Iran does have major mobilization personnel resources (Iran is a very young country)  and this does factor big time in the event of escalation of the conflict but for now we should leave this issue to diplomats. But the fact that Putin decided to speak to Rouhani is telling. Can we foresee now a possible full blown military alliance between Russia and Iran? If salvos by US against Syria's targets will continue we may witness something which seemed impossible even a year ago. But then again, could we have foreseen Trump's betrayal of his country and his submission to neocon war criminal cabal so fast? Even if to consider that this all might be (such possibility, however weak still exists) a political buffoonery for domestic consumption.  This, plus a total lack of any ability to calculate the consequences of actions. 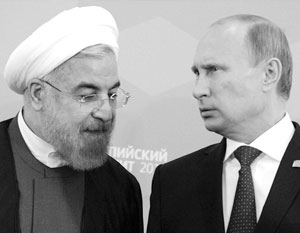 UPDATE:  Thanks to Vlad, who pointed this out yesterday, Anglo-American main stream media, being a sewer that they are, proved again that they are also a propaganda machine, which, as I stated not for once, gives Goebbels a bad name. The statement by Reuters (highlighted in yellow) turned out to be a complete BS. In fact an atrocious fabricated lie, as it is expected from "western media". This fact, however, does not change a significance of Putin speaking only to Iran's leader, on his request, which does signify a necessity for Iran to stop playing too much Oriental bargaining game and move closer to Russia who, strategically, is the only power which can guarantee Iran's peaceful development.