About Dollar, Sort Of.

I am by far not the only one who saw this fate for US Dollar and, frankly, it wasn't that difficult to predict. Now there are some tangibles on this matter.

After years of talking about abandoning the US dollar, Russia and China are doing it for real. In the first quarter of 2020, the share of the dollar in trade between the countries fell below 50 percent for the first time.To give an indication of the scale of the adjustment, just four years ago the greenback accounted for over 90 percent of their currency settlements.According to Moscow daily Izvestia, the share has dropped to 46 percent, tumbling from 75 percent in 2018. The 54 percent of non-dollar trade is made up of Chinese yuan (17 percent), the euro (30 percent), and the Russian ruble (7 percent).

Pretty much self-explanatory. Russia can afford to sell whatever she wants for whatever currency she wants. She can pump oil to China and get payments in Yans or Euros if she decides to do so. The answer is simple--Russia is a superpower and she behaves as such.

Movement away from the dollar can also be seen in Russia's trade with other parts of the world, such as the European Union. Since 2016, trade between Moscow and the bloc has been mainly in Euros, with its current share sitting at 46 percent.

That brings us to this point Michael Hudson made recently when speaking on Western economic "science". Remember?

Indeed, they don't. It is nearly impossible to explain to Wall Street banker what military-economic power balance is and how it influences prices and currencies.  For some dude with degree in "economics" from Western university, who is getting ready to plunge into the world of financial speculation, trading in figments of imagination and intangible myths that is, and who is brought up, in the words of General Latiff, on a steady diet of Hollywood portrayal of a war, connection between hyper-sonic missile technology and economic implosion of the United States is beyond his (her) sensory grasp. But the connection is there and it is very direct. The US can bomb Iraq into the stone age for Iraq's desire, same as Libya's Qaddafi, to sell their oil for currencies other than US Dollar, but Russia cannot be bombed. Well, she can be bombed, but the United States will also cease to exist--so here is a direct connection. Russia unloaded all of her US Treasuries and trades with anybody she wants in whatever currency she desires.

Many people from "elites" still cannot recognize a simple fact that the MAIN pillar of US Dollar system, apart from "trust", is not even US manufacturing capacity, which is largely gone, but US military power on which US Dollar's primacy was based. Not anymore. US military is turning into a hollow force with an astonishing speed. It is somewhat reminiscent of the process of a decline of the former Soviet Armed Forces in 1990s Russia. While not at that level of decay yet, there is nothing realistically which can prevent US Armed Forces from hitting  such a level. This is yet to be seen if it goes there but the United States is in no position anymore to enforce anything militarily even against regional power such as Iran without sustaining huge losses, both material and reputational. Against China? Hm. Not within First Island Chain. Now consider the fact that Europe has Euro, Russia has Ruble, China has Yan and China and Russia begin to trade in mutual currencies, while US-China trade war accelerates and there you go--the "after-dollar" global picture emerges and... well, just look at this picture: 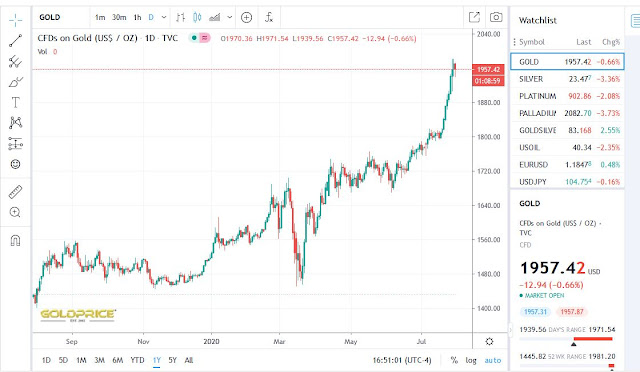 Isn't that cute how gold "suddenly" (within a year) decided to grow, despite all attempts to suppress its "price". And I am not even talking about the oil price. Somebody is laughing all the way to the bank. In related news, one of the reasons for the US to feel somewhat uneasy--here is a video of Russian Navy's incessant combat drills, this time with Frigate Admiral Essen facing off with two supersonic P-35 anti-shipping missiles fired from famous "sotka" (100), aka Utes, site at the Crimean shore.
I have to admit--I love this new ship uniform. Seems elegant and easy on your skin. But the thing which conveyed profoundly what Russians think about current historic moment was this simple comment by some Russian person under this video by Russia's Defense Ministry:

Translation: It used to be that in Soviet times I didn't watch program "Vremya" (Time, main Soviet and Russian official news broadcast), because everything was good... the harvest was great, housing construction proceeded apace, we had atomic and hydrogen bombs, the army was strong... but after the collapse of the USSR, before Putin, it became a nightmare. Then Putin came, the life started to return to normalcy... and now my calmness returned to me as if back in the USSR... the harvest is great, the construction of housing goes ahead, the rearmament of our armed forces proceeds in all directions... this is bliss. Most important, not to allow anyone to rob our Russia as was happening in condemned 1990s... no any maidans in Russia. It is so peaceful to live now... it is a bliss.

This is a profoundly Russian observation. It is shared by majority of Russians and that is what, in the end, decides the issue. Russia can exist only as superpower or none at all. This lesson was learned well.
Posted by smoothiex12 at 2:14 PM